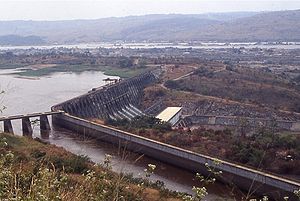 Inga I dam, with the feeding canal for Inga II in the foreground. 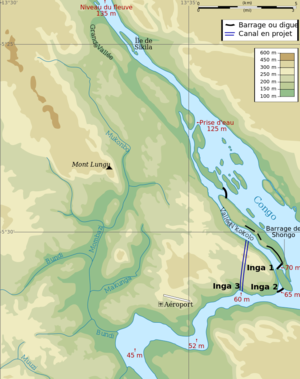 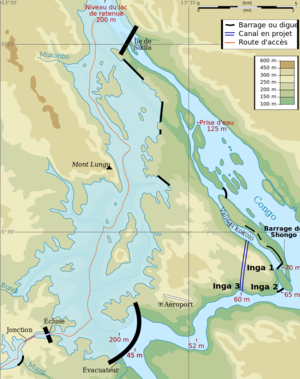 Official projections for Inga III and Grand Inga, as of 2006.

The Inga Dams are two hydroelectric dams connected to one of the largest waterfalls in the world, Inga Falls. They are located in the western Democratic Republic of the Congo and 140 miles southwest of Kinshasa. The Congo River drops 96 metres (315 ft).[1]

The Belgian colonial government was considering starting what it called "The Inga Scheme" on the eve of decolonization in 1959.[2] Inga I was completed in 1972, and Inga II in 1982.[3]

The two hydroelectric dams, Inga I and Inga II, currently operate at a low output. Inga I has a total installed capacity of 351 MW and Inga II has 1424 MW.[4] They were built under former president Mobutu Sese Seko as part of the Inga–Shaba project.

There are expansion plans to create a third Inga dam, Inga III. Projections indicate that once completed, Inga III would generate 4,500 MW of electricity. Inga III is the centerpiece of the Westcor partnership which envisions the interconnection of the electric grids of the Democratic Republic of the Congo (DRC), Namibia, Angola, Botswana, and South Africa. The World Bank, the African Development Bank, the European Investment Bank, bilateral donors, and the southern African power companies, have all expressed interest in pursuing the project which is estimated to cost 80 billion USD.

The Grand Inga Dam would generate 39,000 MW – and would significantly boost the energy available to the African continent at a cost of $80 billion. Connecting Inga to a continent-wide electricity grid for main population centers would cost $10 billion more (est. 2000), and would be the world's largest hydroelectric project. Critics contend the huge amounts of money required for the project would be better spent with smaller scale, localized energy projects that would better meet the needs of Africa's poor majority. A study from Oxford University supports this cautious approach by showing that the average cost overrun for 245 large dams in 65 countries across six continents is 96% in real terms.[5]

The NEPAD (New Partnership for Africa's Development), with significant involvement of South African electric power company ESKOM, has suggested to start the Grand Inga project in 2010.[6][7] At an installed capacity of 39,000 MW, the Grand Inga alone could produce 250 TWh annually, or a total of 370 TWh annually for the whole site. In 2005, Africa's annual electricity production was 550 TWh (600 kWh per capita). If the dam were to be completed somewhere in the 2020s, the continent might produce more than 1000 TWh, 20% of total estimated energy requirements, at that time.

Africa produces a very low amount of electric energy per capita compared to other regions of the world. Projects such as the Grand Inga Dam, which can generate 43.5 GW, or tapping into the abundant solar energy, can help solve Africa's electricity shortage. In 2005, South Africa and North Africa produced 70% of the 550 TWh (63 GW) electric output of the continent.

There is a false belief that the Grand Inga Dam can produce enough electricity for the whole continent. That was true before the 1990s. [8][9] The continent has annual economic and population growth respectively of 5% and 2.5%. In 2005, electricity usage was 600 kWh per capita for the 910 million Africans. The region with chronic power shortages is Sub Saharan Africa (South Africa excluded), where production was only 250 kWh per capita for 700 million people. An African average of at least 1000 kWh per capita requires a total continental production of more than 1000 TWh p.a. / 120 GW. This is equivalent to three times the maximum capacity of Grand Inga Dam. It should be noted that the world average per capita was 3044 kWh in 2012 (The World Bank: 2014 The Little Data Book).

According to some, Grand Inga would be too large a proportion of the African demand (43.5 GW combined output compared to a load of 63 GW) to be a practical power source without interconnection by a wide area synchronous grid for example, as well as other power grids.[citation needed] Any large-scale failure of the dam, or its connections to the grid, such as the 2009 Brazil and Paraguay blackout (17 GW), or the 2009 Sayano–Shushenskaya power station accident in Siberia (6.4 GW), would plunge large parts of Africa into a power failure with potentially serious consequences. The Siberia failure, for example, had a disastrous effect on local aluminium smelters. By this argument, full utilization requires interconnection with Europe, so that power to Europe can then be back fed to Africa. This increases the stability of both systems and reduces overall costs.[10][11]

Three international consortia are bidding for the contract to build the dam, known as Inga III, and to sell the power it generates, estimated at 4,800 MW. This is nearly three times the power produced from Inga's two existing dams, which are decades old and have been crippled by neglect because of government debt and risk-averse investors. The World Bank said, under the current plan, South Africa would buy 2,500 MW from Inga III, and another 1,300 MW would be sold to Congo's power-starved mining industry. The remaining 1000 megawatts would go to the national utility SNEL, helping provide power to an estimated 7 million people around Kinshasa, Congo's capital, and covering all the projected unmet electricity needs there by 2025.[12]