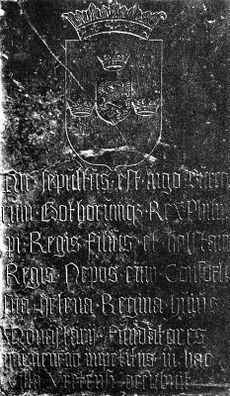 16th century gravestone to King Inge the Younger at Vreta Abbey, with some inaccurate information on it, though probably placed correctly over his and King Philip's bones near the church's altar.

Inge the Younger was King of Sweden in 1110–1125 and the son of king Halsten[1][2] and he was probably Halsten's youngest son.[2] According to unreliable traditions[1] Inge would have ruled together with his brother Philip Halstensson after the death of their uncle Inge the Elder:[1][2] In English literature both have also been called Ingold.[3]

Hallstein's sons were Philip and Ingi, and they succeeded to the Kingdom of Sweden after King Ingi the elder. (The 13th century Hervarar saga)[4]

Other sources say that after the death of Philip (1118), Inge the Younger was the sole king of Sweden,[1] but the year of his own death is unknown.[2] According to the regnal list in the Westrogothic law, Inge was poisoned with an evil drink in Östergötland:[2]

The tenth (Christian king) was king Inge, the brother of king Philip, and he was named after king Inge (the Elder). He was killed by evil drink in Östergötland and it was his bane. But Sweden fared forever well, while these kinsmen ruled.[6]

It is not known whether Inge was still alive when the Norwegian king Sigurd I of Norway invaded Småland in 1123,[2] but when Inge died, it was the end of the House of Stenkil.[1][2]

Inge is reported to have been married to Ulvhild Håkansdotter who was the daughter of the Norwegian Haakon Finnsson and who would later marry the Danish king Nils Svensson and even later the Swedish king Sverker the Elder.[2]