listen); Austro-Bavarian [ˈɪŋl̩ʃtɔːd]) is a city in the Free State of Bavaria, in the Federal Republic of Germany. It is located along the banks of the River Danube, in the centre of Bavaria. As of 31 December 2014[update], Ingolstadt had 131,002 citizens. It is part of the Munich Metropolitan Area, which has a total population of more than 5 million.

The Illuminati, a Bavarian secret society, was founded in Ingolstadt in the late 18th century.

Ingolstadt is a setting in the novel Frankenstein by Mary Shelley, where the scientist Victor Frankenstein creates his monster.

It is the site of the headquarters of the German automobile manufacturer Audi, defence aircraft manufacturer Cassidian Air Systems (formerly EADS DS), and electronic stores Media Markt and Saturn.

Ingolstadt Central Station has been connected to Nuremberg by a high-speed rail link since May 2006. Ingolstadt also has a second passenger station at Ingolstadt Nord.

Covering an urban area of 133.35 square kilometres (51.49 sq mi), Ingolstadt is geographically Bavaria's fourth-largest city after Munich, Nuremberg and Augsburg. At its largest point the city is about 18 km (11 miles) from east to west and from north to south about 15 km (9 miles). The city boundary has a length of 70 km (43 miles).

The city boundary is about 14 km (9 mi) away from the geographic centre of Bavaria in Kipfenberg. The old town is approximately 374 metres (1,227 feet) above sea level and the highest point, located in the district of Pettenhofen, is 410.87 m (1,348.00 ft). The lowest point of the Schutter confluence with the Danube is at 362 m (1,188 ft) above sea level. Ingolstadt uses Central European Time as throughout Germany; the average time lag is 14 minutes.

The city is expanding at the northern and southern banks of the Danube in a wide flat bowl. The Ingolstadt basin borders the Jura foothills, located south and is to the north of the Donau-Isar-Hügelland. In the southwest is the Donaumoos while in the east the lowland forests of the Danube reach into the urban area. It is the second largest hardwood floodplain on the Danube. The Sandrach, the former Southern main branch of the Danube, partly forms the Southern city border. In the north, the Schutter flows through from the west reaching the Danube near to the Altstadt. 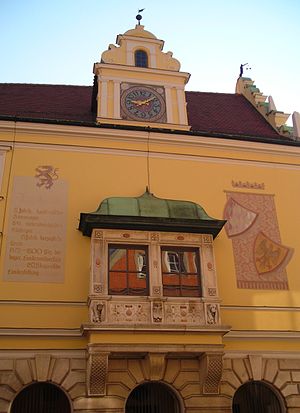 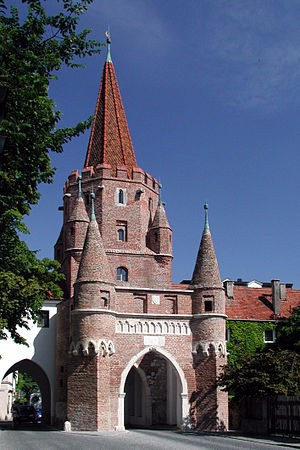 Ingolstadt was first mentioned in a document of Charlemagne on 6 February 806 as "Ingoldes stat", the place of Ingold. Circa 1250, Ingolstadt was granted city status.

Ingolstadt was the capital of the duchy Bavaria-Ingolstadt between 1392 and 1447. Ingolstadt was then united with Bavaria-Landshut. Louis VII, Duke of Bavaria ordered the building of the New Castle, whose form was strongly influenced by French Gothic architecture.

On 30 April 1632, the German field marshal Johann Tserclaes, Count of Tilly died at Ingolstadt during a Swedish siege of the city. The field marshal had been badly wounded in a previous engagement with the Swedes under King Gustavus Adolphus. Ingolstadt proved to be the first fortress in Germany that held out for the entire length of the Swedish siege, and the Swedes eventually withdrew.

The remains of Gustavus Adolphus' horse can be seen in the City Museum. The horse was shot from under the king by one of the cannons inside the fortress, a cannon known as "The Fig". When the Swedes withdrew, the city preserved the remains of the king's horse, eventually putting the form on display. It has remained thus for almost 400 years. After the French invasion in 1799 the fortress was demolished and the university was relocated to Landshut.

Originally a fortress city, Ingolstadt is enclosed by a medieval defensive wall. The Bavarian fortress (1537–1930) now holds the museum of the Bavarian army. During World War I, future French president Charles de Gaulle was detained there as a prisoner of war. A sappers' drill ground lies next to the river, and two military air bases are located nearby, one used for testing aircraft. The long military tradition of the city is reflected in today's civil and cultural life. Former "off-limit" military training areas have been converted into well-used public parks.

Ingolstadt is where William IV, Duke of Bavaria wrote and signed the Bavarian Reinheitsgebot in 1516.

In 1748, Adam Weishaupt, the founder of the Order of Illuminati, was born in Ingolstadt.

As one of five ducal residences of medieval Bavaria — besides Landshut, Munich, Straubing and Burghausen — the city of Ingolstadt features many Gothic buildings, such as the Herzogskasten (Old ducal castle; ca. 1255) and the New Castle, which was built from 1418 onwards. The largest church is the Gothic hall, Church of Our Lady, which was begun in 1425. Also the churches of Saint Maurice (1235) and of the Gnadenthal and Franciscans monasteries date from the Gothic era. The Kreuztor (1385) is one of the remaining gates of the old city wall. The Gothic Old City Hall was constructed in the 14th century, and later altered several times.

The Baroque era is represented by the Old Anatomy Building of the university (1723–1736, designed by Gabriel de Gabrieli) and the church St. Maria de Victoria, which was built by the Asam brothers (1732–1736). The church of the Augustinians of Johann Michael Fischer (1736) was completely destroyed in World War II.

Many buildings of the neo-classical fortification of Leo von Klenze have been preserved, such as the Reduit Tilly and the towers Baur and Triva.

As well as being the home of the headquarters of the car manufacturer Audi, the town is also home to Audi's museum mobile, which is open to the public and presents historic exhibits and offers guided tours.

Ingolstadt is a green city with numerous parks, green spaces and forests. The most prominent of these is the "Glacis", formerly an open space in front of the city walls, now surrounding the historic city center. It functions as a "green belt" and a buffer area between traffic, residential areas and schools. It is possible to traverse it using spacious paths for pedestrians and cyclists, with a good view of the site of the former fortifications, including a well-preserved section of the ditch. The biggest park in the city, the Klenzepark, which contained the former Ingolstadt State Fortress, and was the site of the Landesgartenschau in 1992, is also a part of the Glacis.

The biggest forest in Ingolstadt is the Auwald ("riverside forest", also called "Schüttel"). It is found on both the northern and southern banks of the Danube, and is one of the biggest well-preserved river forests in Germany, extending mainly from Neuburg to Ingolstadt with extensions to the city center. The forest serves as a natural reserve, with parts containing unique vegetation or acting as a wildlife reserve.

Ingolstadt is home of one of Germany's foremost[citation needed] business schools: the Ingolstadt School of Management. It is the department of business administration and economics of the Catholic University of Eichstaett-Ingolstadt. In national rankings, the business school regularly scores among the top ten, which is due to its high academic quality and excellent student:professor ratio. The faculty maintains a large network of partner universities for international educational exchange.

The Ingolstadt School of management offers bachelor's and master's degrees in business administration (German: BWL - Betriebswirtschaftslehre). Among the academic programs offered are also an executive MBA and doctoral degrees.

The University of Applied Sciences Ingolstadt is a new university for technology, computer sciences and business administration. With around 2,500 students the University is the biggest institution of learning in Ingolstadt.

Several scholarship programmes supported by companies such as Siemens and Temic provide gifted students with financial assistance during their studies. These students deepen their practical experience by working at these organizations.

The University of Applied Sciences Ingolstadt offers several undergraduate and graduate programmes. Every programme is listed under the top 25 in Germany.

The sports life of the city is based on the 83 registered sports clubs. The biggest sports club is the MTV 1881 Ingolstadt, with over 3000 registered members in 16 branches. In total, the sports clubs in Ingolstadt have more than 41,000 members.

Ingolstadt is especially known for ice hockey and association football. ERC Ingolstadt, founded in 1964, plays in the German Ice Hockey League since the 2002-03 season. With the exception of its season of debut and 2007–08, the club has reached the national play-offs every year as of 2014, and has reached the semi-finals three times. They won the German Ice Hockey League Championship in 2014.

Ingolstadt is also a pivotal location in The Illuminatus! Trilogy by Robert Shea and Robert Anton Wilson.

Dr. Faust is mentioned in an old and short local tale.

The sixth scene of "Mother Courage and Her Children" by "Bertolt Brecht" is set in Ingolstadt, when count Tilly died in 1632, during the "Thirty Years War"

Several other cities are sister cities to Ingolstadt: