From Infogalactic: the planetary knowledge core
(Redirected from Ingots)
Jump to: navigation, search

Aluminium ingot after ejection from mold

An ingot is a piece of material, usually metal, that is cast into a shape suitable for further processing.[1] In steelmaking, it is the first step among semi-finished casting products. Ingots usually require a second procedure of shaping, such as cold/hot working, cutting, or milling to produce a useful final product. Non-metallic and semiconductor materials prepared in bulk form may also be referred to as ingots, particularly when cast by mold based methods.[2] Precious metal ingots can be used as currency (with or without being processed into other shapes), or as a currency reserve, as with gold bars.

Metal, either pure or alloy, heated past its melting point and cast into a bar or block using a mold chill method. Polycrystalline and single crystal ingots are made from semiconductor materials by pulling from a molten melt. Uses include the formation of photovoltaic cells from silicon ingots by cutting the ingot into flats, known as wafers.

The boules may be either semiconductors—for the electronic industry, or non-conducting inorganic compounds for industrial and jewelry use, e.g., synthetic ruby, sapphire etc.

Single crystal ingots of metal are produced in similar fashion to that used to produce high purity semiconductor ingots,[3] i.e. by vacuum induction refining. Single crystal ingots of engineering metals are of interest due to their very high strength due to lack of grain boundaries. The method of production is via single crystal dendrite and not via simple casting. Possible uses include turbine blades.

In the United States, the brass and bronze ingot making industry started in the early 19th century. The US brass industry grew to be the number one producer by the 1850s.[4] During colonial times the brass and bronze industries were almost non-existent because the British demanded all copper ore be sent to Britain for processing.[5] Copper based alloy ingots weighed approximately 20 pounds (9.1 kg).[6][7]

A variety of designs exist for the mold, which may be selected to suit the physical properties of the liquid melt and the solidification process. Molds may exist in top, horizontal or bottom-up pouring and may be fluted or flat walled. The fluted design increases heat transfer owing to a larger contact area. Molds may be either solid "massive" design, sand cast (e.g. for pig iron) or water-cooled shells, depending upon heat transfer requirements. Ingot molds are tapered to prevent the formation of cracks due to uneven cooling. Crack or void formation occurs as the liquid to solid transition has an associated volume change for a constant mass of material. Formation of these ingot defects may render the cast ingot useless, and may need to be re-melted, recycled or discarded. 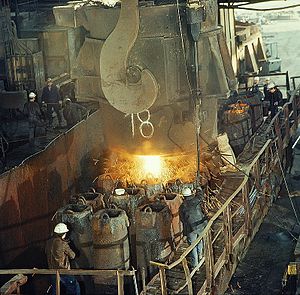 Teeming ingots at a steel mill

The physical structure of a crystalline material is largely determined by the method of cooling and precipitation of the molten metal. During the pouring process, metal in contact with the ingot walls rapidly cools and forms either a columnar structure, or possibly a "chill zone" of equiaxed dendrites, depending upon the liquid being cooled and the cooling rate of the mold.[8]

For a top-poured ingot, as the liquid cools within the mold, differential volume effects cause the top of the liquid to recede leaving a curved surface at the mold top which may eventually be required to be machined from the ingot. The mold cooling effect creates an advancing solidification front, which has several associated zones, closer to the wall there is a solid zone which draws heat from the solidifying melt, for alloys there may exist a "mushy" zone, which is the result of solid-liquid equilibrium regions in the alloy's phase diagram, and a liquid region. The rate of front advancement controls the time that dendrites or nuclei have to form in the solidification region. The width of the mushy zone in an alloy may be controlled by tuning the heat transfer properties of the mold, or adjusting the liquid melt alloy compositions.

Continuous casting methods for ingot processing also exist, whereby a stationary front of solidification is formed by the continual take-off of cooled solid material, and the addition of molten liquid to the casting process.[9]

Approximately 70 percent of aluminium ingots in the U.S. are cast using the direct chill casting process, which reduces cracking. A total of 5 percent of ingots must be scrapped because of stress induced cracks and butt deformation.[10]

Plano-convex ingots are widely distributed archaeological artifacts which are studied to provide information on the history of metallurgy.