Inigo Jones (/ˈɪnᵻɡoʊ/; 15 July 1573 – 21 June 1652) was the first significant English architect of the early modern period, and the first to employ Vitruvian rules of proportion and symmetry in his buildings.[1] He left his mark on London by single buildings, such as the Queen's House which is the first building in England designed in a pure classical style, and the Banqueting House, Whitehall, as well as the layout for Covent Garden square which became a model for future developments in the West End. He made major contributions to stage design by his work as theatrical designer for several dozen masques, most by royal command and many in collaboration with Ben Jonson. 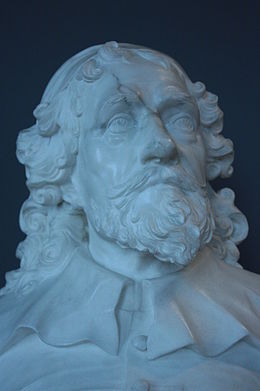 Beyond the fact that he was born in Smithfield, London, the son of Inigo Jones, a Welsh cloth worker, and baptised at the church of St Bartholomew-the-Less, little is known about Jones's early years. He did not approach the architectural profession in the traditional way, namely either by rising up from a craft or through early exposure to the Office of Works, although there is evidence that Christopher Wren obtained information that recorded Inigo Jones as an apprentice joiner in St Paul's Churchyard.[2] At some point before 1600 a rich patron (possibly the Earl of Pembroke) sent him to Italy to study drawing after being impressed by the quality of his sketches. From Italy he travelled to Denmark where he worked for King Christian on the design of the palaces of Rosenborg and Frederiksborg.[3] 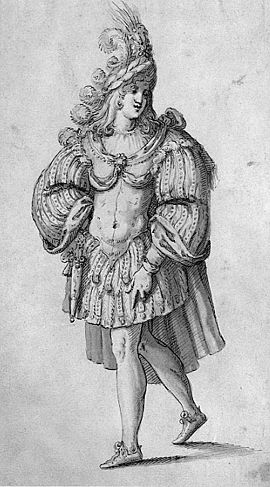 A masque Costume for a Knight, designed by Inigo Jones

Under Queen Anne's patronage[3] he is credited with introducing movable scenery and the proscenium arch to English theatre. Between 1605 and 1640, Jones was responsible for staging over 500 performances, collaborating with Ben Jonson for many years, despite a relationship fraught with competition and jealousy: the two had arguments about whether stage design or literature was more important in theatre. (Jonson ridiculed Jones in a series of his works, written over a span of two decades.).[4] Over 450 drawings for the scenery and costumes survive, surviving evidence of Jones's virtuosity as a draughtsman and understanding of Italian set design, particularly that of Alfonso and Giulio Parigi. It is important to understand that there was no conception of such draughtsmanship in England at this time, although it had been the medium used by Italian painters, sculptors and architects for about a hundred years. Around this time, Jones learned to speak Italian fluently and obtained an Italian copy of Andrea Palladio's I quattro libri dell'architettura (first published in 1570): all indicating that Jones made his first formative trip to Italy between 1598–1603, possibly funded by the Earl of Rutland. These drawings of set design and costume reveal an interesting development in Jones's draughtsmanship between 1605 and 1609, initially showing "no knowledge of Renaissance draughtsmanship", then in 1609, exhibiting an "accomplished Italianate manner".[5] This offers potential evidence of a second visit to Italy, circa 1606,[6] influenced by the ambassador Henry Wotton: there is evidence that Jones owned a copy of Andrea Palladio's works with marginalia that refer to Wotton. His work became particularly influenced by Palladio.[7] To a lesser extent, he also held that the setting out of buildings should be guided by principles first described by ancient Roman writer Vitruvius.

Jones's first recorded structural work is his monument to Lady Cotton, circa 1608, showing early signs of his classical intentions.[8] Around this time, Jones also produced drawings for the New Exchange in the Strand and the central tower of St. Paul’s Cathedral, displaying a similar practical architectural inexperience and immature handling of themes from sources including Palladio, Serlio and Sangallo. In 1609, having perhaps accompanied Lord Salisbury's son and heir, Viscount Cranborne, around France, Inigo Jones appears as an architectural consultant at Hatfield House, making small modifications to the design as the project progressed, and in 1610, Jones was appointed Surveyor to Henry Frederick, Prince of Wales and in this position, Jones devised a masque for the Prince and was possibly involved in some alterations to St James’s Palace.[9] On 27 April 1613, Jones was appointed the position of Surveyor of the King’s Works and shortly after, embarked on a tour of Italy with the Earl of Arundel, destined to become one of the most important patrons in the history of English art. On this trip, Jones was exposed to the architecture of Rome, Padua, Florence, Vicenza, Genoa and Venice among others. His surviving sketchbook shows his preoccupation with such artists as Parmigianino and Schiavone. He is also known to have met Vicenzo Scamozzi at this time. His annotated copy of Palladio's Quattro libri dell' architecttura also demonstrates his close interest in classical architecture: Jones gave priority to Roman antiquity rather than observing the contemporary fashion in Italy. He was probably the first Englishman to study these Roman remains first hand and this was key to the new architecture Inigo Jones introduced in England.[citation needed] 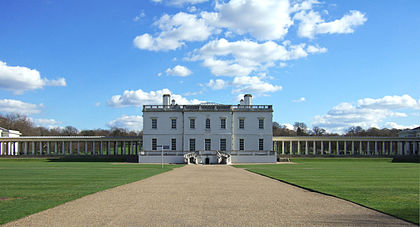 The Queen's House at Greenwich

In September 1615, Jones was appointed Surveyor-General of the King's Works, marking the beginning of Jones' career in earnest. Fortunately, both James I and Charles I spent lavishly on their buildings, contrasting hugely with the economical court of Elizabeth I. As the King's Surveyor, Jones built some of his key buildings in London. In 1616, work began on the Queen's House, Greenwich, for James I's wife, Anne. With the foundations laid and the first storey built, work stopped suddenly when Anne died in 1619. Work resumed in 1629, but this time for Charles I's Queen, Henrietta Maria. It was finished in 1635 and was the first strictly classical building in England, employing ideas found in the architecture of Palladio and ancient Rome. This is Inigo Jones's earliest surviving work. 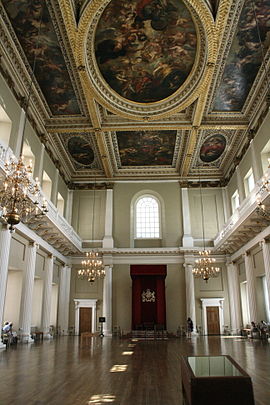 Interior of Banqueting House, with ceiling painted by Rubens

Between 1619 and 1622, the Banqueting House in the Palace of Whitehall was built, a design derived from buildings by Scamozzi and Palladio and with a ceiling painted by Peter Paul Rubens. The Banqueting House was one of several projects where Jones worked with his personal assistant and nephew by marriage John Webb.[citation needed]

The Queen's Chapel, St. James's Palace, was built between 1623–1627, for Charles I's Roman Catholic wife, Henrietta Maria. Parts of the design originate in the Pantheon of ancient Rome and Jones evidently intended the church to evoke the Roman temple. These buildings show the realisation of a mature architect with a confident grasp of classical principles and an intellectual understanding of how to implement them. 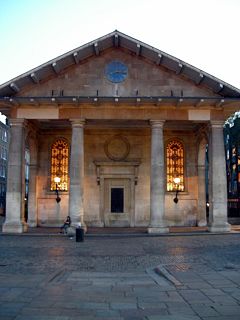 The other project in which Jones was involved was the design of Covent Garden square. He was commissioned by the Earl of Bedford to build a residential square, which he did along the lines of the Italian piazza of Livorno.[10] It is the first regularly planned square in London. The Earl felt obliged to provide a church and he warned Jones that he wanted to economise. He told him to simply erect a "barn" and Jones's oft-quoted response was that his lordship would have "the finest barn in Europe". In the design of St Paul's, Jones faithfully adhered to Vitruvius's design for a Tuscan temple and it was the first wholly and authentically classical church built in England. The inside of St Paul's, Covent Garden was gutted by fire in 1795, but externally it remains much as Jones designed it and dominates the west side of the piazza.

Jones also designed the square of Lincoln's Inn Fields, and a house in the square, the Lindsey House built in 1640, is often attributed to Jones.[11][12] Its design of a rusticated ground floor with giant pilasters above supporting the entablature and balustrade served as a model for other town houses in London such as John Nash's Regent's Park terraces, as well as in other English towns such as Bath's Royal Crescent.[13]

Another large project Jones undertook was the repair and remodelling of St Paul's Cathedral. Between the years of 1634 and 1642, Jones wrestled with the dilapidated Gothicism of Old St Paul's, casing it in classical masonry and totally redesigning the west front. Jones incorporated the giant scrolls from Vignola and della Porta's Church of the Gesù with a giant Corinthian portico, the largest of its type north of the Alps, but was destroyed in the Great Fire of London in 1666. Also around this time, circa 1638, Jones devised drawings completely redesigning the Palace of Whitehall, but the execution of these designs was frustrated by Charles I's financial and political difficulties.[citation needed]

More than 1000 buildings have been attributed to Jones but only a very small number of those are certainly his work. According to architecture historian John Summerson, the modern concept of an architect's artistic responsibility for a building did not exist at that time, and Jones' role in many instances may be that of a civil servant in getting things done rather than as an architect. Jones' contribution to a building may also simply be verbal instructions to a mason or bricklayer and providing an Italian engraving or two as a guide, or the correction of drafts.[14] In the 1630s, Jones was in high demand and, as Surveyor to the King, his services were only available to a very limited circle of people, so often projects were commissioned to other members of the Works. Stoke Bruerne Park in Northamptonshire was built by Sir Francis Crane, "receiving the assistance of Inigo Jones", between 1629 and 1635. Jones is also thought to have been involved in another country house, this time in Wiltshire. Wilton House was renovated from about 1630 onwards, at times worked on by Jones, then passed on to Isaac de Caus when Jones was too busy with royal clients. He then returned in 1646 with his student, John Webb, to try and complete the project. Contemporary equivalent architects included Sir Balthazar Gerbier and Nicholas Stone.[citation needed] 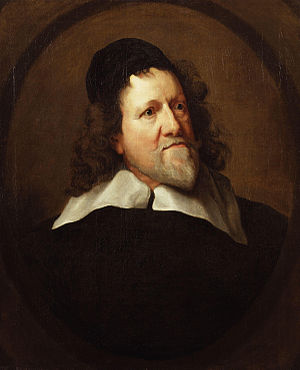 Inigo Jones's full-time career effectively ended with the outbreak of the English Civil War in 1642 and the seizure of the King's houses in 1643. His property was later returned to him (c. 1646) but Jones ended his days, unmarried, living in Somerset House. He was however closely involved in the design of Coleshill, in Berkshire, for the Pratt family, which he visited with the young apprentice architect Roger Pratt, to fix a new site for the proposed mansion. He died on 21 June 1652 and was subsequently buried with his parents at St Benet Paul's Wharf, the Welsh church of the City of London. John Denham and then Christopher Wren followed him as King's Surveyor of Works. A monument dedicated to him was destroyed in the Great Fire in 1666.

He was an influence on a number of 18th century architects, notably Lord Burlington and William Kent. There is an Inigo Jones Road in Charlton, south east London (SE7). A bridge in Llanrwst, north Wales named "Pont Fawr" is also known locally as "Pont Inigo Jones" – Inigo Jones's Bridge. He is also said to be responsible for the Masonic Document called "The Inigo Jones Manuscript," from around 1607. A document of the Old Charges of Freemasonry.[15][16]