From Infogalactic: the planetary knowledge core
Jump to: navigation, search
For other uses, see Initiation (disambiguation).

Initiation is a rite of passage marking entrance or acceptance into a group or society. It could also be a formal admission to adulthood in a community or one of its formal components. In an extended sense it can also signify a transformation in which the initiate is 'reborn' into a new role. Examples of initiation ceremonies might include Hindu diksha, Christian baptism or confirmation, Jewish bar or bat mitzvah, acceptance into a fraternal organization, secret society or religious order, or graduation from school or recruit training. A person taking the initiation ceremony in traditional rites, such as those depicted in these pictures, is called an initiate.

Mircea Eliade discussed initiation as a principal religious act by classical or traditional societies. He defined initiation as "a basic change in existential condition," which liberates man from profane time and history. "Initiation recapitulates the sacred history of the world. And through this recapitulation, the whole world is sanctified anew... [the initiand] can perceive the world as a sacred work, a creation of the Gods."

Eliade differentiates between types of initiations in two ways: types and functions.

Reasons for and functions of Initiation

These can be broken into two types:

In the study of certain social forms of initiation, such as hazing in college fraternities and sororities, laboratory experiments in psychology suggest that severe initiations produce cognitive dissonance.[1] Dissonance is then thought to produce feelings of strong group attraction among initiates after the experience, because they want to justify the effort used.[2] Rewards during initiations have important consequences in that initiates who feel more rewarded express stronger group identity.[3] As well as group attraction, initiations can also produce conformity among new members.[4] Psychology experiments have also shown that initiations increase feelings of affiliation.[5]

A spiritual initiation rite normally implies a shepherding process where those who are at a higher level guide the initiate through a process of greater exposure of knowledge. This may include the revelation of secrets, hence the term secret society for such organizations, usually reserved for those at the higher level of understanding. One famous historical example is the Eleusinian Mysteries of ancient Greece, thought to go back to at least the Mycenaean period or "bronze age". 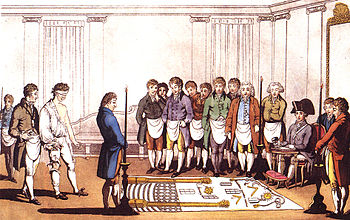 In the context of ritual magic and esotericism, an initiation is considered to cause a fundamental process of change to begin within the person being initiated. The person conducting the initiation (the initiator), being in possession of a certain power or state of being, transfers this power or state to the person being initiated. Thus the concept of initiation is similar to that of apostolic succession. The initiation process is often likened to a simultaneous death and rebirth, because as well as being a beginning it also implies an ending as existence on one level drops away in an ascension to the next. Initiation is a key component of Vaishnavism, Sant Mat, Surat Shabd Yoga, Wicca, and similar religious gnostic traditions. It denotes acceptance by the Guru and also implies that the Chela (student or disciple) agrees to the requirements (such as living an ethical lifestyle, meditating, etc.)

In unionised organizations, the "initiation" is typically no more than a brief familiarization with basic procedures and the provision of a copy of the appropriate collective bargaining agreement that governs the work performed by members of the union. Some unions also charge a one-time initiation fee, after which the joining person is officially deemed to be a member in good standing.

Some communities on board a military vessel and also of military soldiers tend to form a closed 'family' which absorbs in members, who are often formally accepted, generally after a form of trial or hazing.

In addition, there can be similar rites of passages associated with parts of naval and military life, which do not constitute true initiations as the participants are already and remain members of the same community. One such rite is associated with crossing the equator on board a naval ship, but it can even be taken by passengers on board a cruise liner, who are not and do not become members of anything but the so-called "equator crossing club". Another form, “Kissing the Royal Belly” or “Royal Baby”, calls for initiates to kneel before a senior member of the crew, who wears a mock diaper. This “Baby” usually has a huge stomach covered with greasy materials ranging from cooking oil to mustard, shaving cream, eggs, and oysters. Junior sailors must lick the Baby’s navel area, while the "baby" grabs and shakes their head to better smear the goo onto their faces.[6]

Gangs often require new members to commit crimes before accepting them as part of the gang.[7] New members may be physically beaten by fellow gang members to demonstrate their courage, also known as "beat in" or "jump in", which occasionally results in a fatality.[7][8] One study indicates that young people are more likely to be hurt in gang initiation than they are by refusing to join.[9] Female members may be required to have sex with male members as a form of initiation, also known as "sex in", though they may also be "jumped-in" like their male counterparts. One study shows that female members who were “sexed-in” as part of gang initiation were there after viewed with lower respect than those that were "jumped-in", even when promised they would become full-fledged members.[10] Another study found that sexed-in members face greater risks of sexual exploitation and abuse by fellow male members.[11]

Tribes often have initiations. The initiation done in the Bapedi tribe of South Africa is normally regarded as a stage where a boy is to be taught manhood and a girl to be taught womanhood. In many African tribes, initiation involves circumcision/genital mutilation of males and sometimes circumcision/genital mutilation of females as well. Initiation is considered necessary for the individual to be regarded as a full member of the tribe. Otherwise, the individual may not be allowed to participate in ceremonies or even in social rituals such as marriage. A man will not be allowed to marry or have any special relationship with a woman who did not go to an initiation, because she is not considered to be a woman.

Initiation may be thought of as an event which may help teens prepare themselves to be good husbands and wives. Where modernization is occurring, initiation is not taken so seriously as before, although there are still certain areas which still perform initiations.

In some African tribes, boys take about 3–4 months participating in initiation rites and girls take about 1–2 months.

Australian Aboriginal tribes usually had long periods of time to help prepare adolescent boys, teaching them traditional lore before they were ready to attend large elaborate ceremonies at the time of initiation when they were finally recognized as full-fledged men in their society. Most tribes had circumcision and scarification as part of the male initiation rituals, while many Central Australian tribes also practiced subincision.

A salient shared cultural feature of the Min peoples of the New Guinea Highlands is initiation into a secret male religious cult.[12] For example, the Urapmin people used to practice a type of male initiation known in Urap as ban.[13] These elaborate rituals were a central part of Urapmin social life.[14] The ban was a multistage process which involved beatings and manipulation of various objects.[13] At each stage, the initiate was offered revelations of secret knowledge (Urap: weng awem), but at the next stage these would be shown to be false (Urap: famoul).[13] These initiations were abandoned with the adoption of Christianity, and the Urap have expressed relief at no longer having to administer the beatings which were involved.[15]

Under the Rites of Zhou, boys are initiated into adulthood at age 20 (加冠) and girls at 15 (及笄). The text Yili (儀禮) in the chapter 士冠禮 gives the procedural details of the ceremonies involved.

Close to the end of the ceremony, the initiate is given a 字, or an alias; his name thereafter is secreted except before parents and rulers.