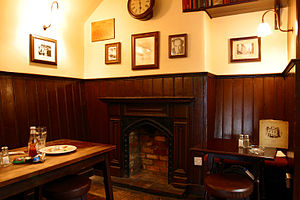 A corner of the pub, formerly the landlord's sitting-room where the Inklings met. There is a small display of memorabilia.

The Inklings was an informal literary discussion group associated with the University of Oxford, England, for nearly two decades between the early 1930s and late 1949.[1] The Inklings were literary enthusiasts who praised the value of narrative in fiction and encouraged the writing of fantasy. 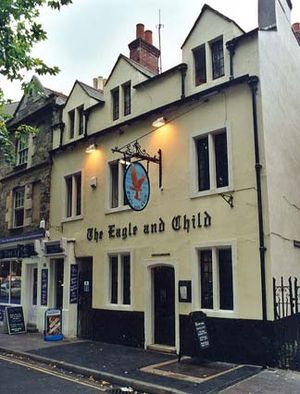 The Eagle and Child pub (commonly known as the Bird and Baby or simply just the Bird) in Oxford where the Inklings met informally on Tuesday mornings during term.

The more regular members of the Inklings, many of them academics at the University, included:

"Properly speaking," wrote Warren Lewis, "the Inklings was neither a club nor a literary society, though it partook of the nature of both. There were no rules, officers, agendas, or formal elections."[2] As was typical for university literary groups in their time and place, the Inklings were all male. (Dorothy L. Sayers, sometimes claimed as an Inkling, was a friend of Lewis and Williams, but never attended Inklings meetings.)

Readings and discussions of the members' unfinished works were the principal purposes of meetings. Tolkien's The Lord of the Rings, Lewis's Out of the Silent Planet, and Williams's All Hallows' Eve were among the novels first read to the Inklings. Tolkien's fictional Notion Club (see "Sauron Defeated") was based on the Inklings. Meetings were not all serious; the Inklings amused themselves by having competitions to see who could read the notoriously bad prose of Amanda McKittrick Ros for the longest without laughing.[3]

The name was associated originally with a society of Oxford University's University College, initiated by the then undergraduate Edward Tangye Lean circa 1931, for the purpose of reading aloud unfinished compositions. The society consisted of students and dons, among them Tolkien and Lewis. When Lean left Oxford during 1933, the society ended, and Tolkien and Lewis transferred its name to their group at Magdalen College. On the association between the two 'Inklings' societies, Tolkien later said "although our habit was to read aloud compositions of various kinds (and lengths!), this association and its habit would in fact have come into being at that time, whether the original short-lived club had ever existed or not."[4]

Until late 1949, Inklings readings and discussions usually occurred during Thursday evenings in C. S. Lewis's college rooms at Magdalen College. The Inklings and friends were also known to informally gather on Tuesdays at midday at a local public house, The Eagle and Child, familiarly and alliteratively known in the Oxford community as The Bird and Baby, or simply The Bird.[5] Later pub meetings were at The Lamb and Flag across the street, and in earlier years the Inklings also met irregularly in yet other pubs, but The Eagle and Child is the best known.

The Mythopoeic Society is a literary organization devoted to the study of mythopoeic literature, particularly the works of J. R. R. Tolkien, C. S. Lewis, and Charles Williams, founded in 1967 and incorporated as a non-profit organization in 1971.

A resurrection of the Inklings in Oxford was made in 2006; the group still meets every Sunday evening, currently at St Cross College nearby the Eagle and Child. It has similar aims and methods to the original group, albeit with somewhat gentler criticism.

Named after the Inklings is The Inklings Society based in Aachen, and their yearbook, Inklings Jahrbuch für Literatur und Ästhetik, published from 1983 by Brendow, Moers. The yearbook contains scholarly articles and reviews, dealing with Inklings members in particular, but also with fantasy literature and mythopoeia in general.

The undergraduate literary and art magazine at Miami University in Oxford, OH, is named Inklings. They also meet on Thursday nights.[6]