From Infogalactic: the planetary knowledge core
Jump to: navigation, search
This article is about the United Kingdom government department. For other countries, see Inland Revenue Department.

The Inland Revenue was, until April 2005, a department of the British Government responsible for the collection of direct taxation, including income tax, national insurance contributions, capital gains tax, inheritance tax, corporation tax, petroleum revenue tax and stamp duty. More recently, the Inland Revenue also administered the Tax Credits schemes,[1] whereby monies, such as Working Tax Credit (WTC) and Child Tax Credit (CTC), are paid by the Government into a recipient's bank account or as part of their wages. The Inland Revenue was also responsible for the payment of child benefit. 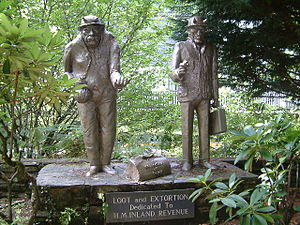 The beginnings of the Inland Revenue date from 1665, when a Board of Taxes was set up following the introduction of special taxes to pay for the Second Anglo-Dutch War. A central organisation to supervise the collection of the special taxes was required.

Taxes administered by the Board of Taxes included the land tax, first levied in 1692, together with an assortment of other assessed taxes, including taxes on houses, windows and dogs. Income tax was introduced in various forms in 1797, 1799, 1803 to 1816, and then reintroduced as an annual tax in 1842 which is formally renewed in each year's Finance Act.

A separate Board of Stamps was created by the Stamps Act 1694. During the eighteenth and early nineteenth centuries at various points as financial strains on the economy demanded, and Parliament allowed, stamp duties were extended above a certain threshold of sale value to cover newspapers, pamphlets, lottery tickets, apprentices' indentures, advertisements, playing cards, dice, hats, gloves, patent medicines, perfumes, insurance policies, gold and silver plate and armorial bearings (coats of arms). One further category is the most widely cited example of an unpopular and most difficult to enforce tax, the Duty on Hair Powder Act 1795. The last stamp taxes to remain are stamp duty land tax and stamp duty reserve tax however stamping has ceased in favour of numerical certificates.

In June 1833, a single body of Commissioners was set up to merge the revenues of stamps and taxes. The Board of Taxes and the Board of Stamps were formally combined under the Land Tax Act 1834.

In 1995 to help promote self-assessment tax returns, Inland Revenue created the character of Hector the Tax Inspector to help in their advertising campaign.

The 2004 Budget included proposals to merge HM Customs and Excise with the Board of Inland Revenue to form a new department, HM Revenue and Customs (HMRC). The merger was implemented by the Commissioners for Revenue and Customs Act 2005 with effect from 18 April 2005.

The Permanent Secretary to the Treasury has the main advisory, policy informative role to play in the enabling of the department's functions, in liaison with Board Chairman who bore overall responsibility along with the rest of the Board for the operational carrying out of the Inland Revenue's functions.

As sub-departments, typically, Offices, Boards and Bureaus have issued their own taxes or expanded their remit they too have seen Comptrollers General and Chairmen. Examples include Robert Wilkie Stanton, Comptroller of Stamps and Taxes (Scotland), Board of Inland Revenue, as is customary for periods of long or diligent service made Commander of the Order of the British Empire, in this instance, in the 1953 Coronation Honours.