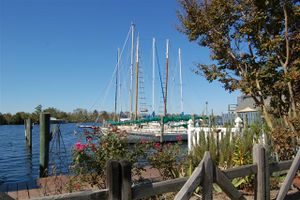 The Inner Banks is a neologism without historical precedent used by developers and tourism promoters to describe the inland coastal region of eastern North Carolina. The term "Inner Banks" is a recent construct on the part of developers and the tourism industry to rebrand the mostly agrarian coastal plain as a more attractive region for visitors and retirees. The term is rarely used colloquially.[citation needed] Many long-time residents are resisting the adoption of the term to describe the area since it is perceived as a marketing tool with a scant history behind it. Its construction plays on the historical area known as the Outer Banks, a string of barrier islands off the coast of North Carolina that are a popular tourist attraction. The demand for waterfront property in eastern North Carolina as a site for second homes for the relatively wealthy has resulted in a tremendous disparity of prices. Frequently otherwise equivalent lots on opposite sides of a road will have broadly divergent tax and appraisal values. For example, on Rock Creek Road in Jones County, riverfront lots on the Trent River have a tax value of $201,286 per acre; lots immediately across the road have a tax value of $33,634 per acre, according to the Jones County GIS maps. Strictly speaking, only the actual waterfront lots should be considered "Inner Banks", but designating non-waterfront lots as "Inner Banks" creates an artificial desirability in the eyes of prospective buyers from afar.

The developers and tourism promoters consider the Inner Banks by its broadest definition to be an area on the East Coast of the United States that is 22,227 square miles (57,568 km²). The so-called Inner Banks comprises over 3,000 miles of inland coastline and is home to over 2.5 million residents. The Crystal Coast and Albemarle regions of the state are thus included in the Inner Banks. With a moderate climate, the area is becoming a popular destination for retirees and small business entrepreneurs.[1][2] "Inner Banks" is sometimes abbreviated with the acronym IBX.

The general definition states that the Inner Banks lie between Interstate 95 to the west, the Outer Banks to the east, and extend from the Virginia border down to the South Carolina border. Consisting of 41 counties, the region is three times the size of the state of New Jersey. Many areas farther from the sounds and tidal rivers have not embraced the Inner Banks brand and are seldom included in the definition. Traditionally dependent on agriculture and the textile industry, eastern North Carolina is undergoing an economic evolution by redefining the region's strengths to transition into the new global economy.

Six small towns in the Inner Banks have joined together in the Creative Communities Initiative.[3] They are working to strengthen the region’s economy by fostering an environment attractive to knowledge workers, artists, and other people working in the creative economy. The six towns involved in the project are: Ayden, Edenton, Hertford, Murfreesboro, Plymouth, and Tarboro.

Northeastern North Carolina (or the Albemarle Region) consists of 16 counties in extreme northeast North Carolina that surround Albemarle Sound and its tributaries, such as the Chowan River and the Roanoke River. Although the region has historically lagged behind the rest of North Carolina in terms of economic growth, it has numerous attractions in its undeveloped beaches, rivers, and small towns. The area comprises the northern part of the Inner Banks. Historic sites within the Albemarle Region are connected by the Historic Albemarle Tour.

Given its access to the sound and rivers, the area was inhabited for thousands of years by various indigenous peoples.

The cash crops were tobacco and cotton cultivation, and planters imported thousands of enslaved Africans for their work force. They and their descendants were integral to the survival and success of the North Carolina colony and later state. Tobacco was especially labor-intensive and exhausted the soil. Some of the first planters shifted to mixed farming by the end of the 18th century.

Most of the region was relatively prosperous until the American Civil War, when its productive farmland and shipping industries became a frequent target for Union invasions. Several towns in the region were burned to the ground by Union troops during this time, including Plymouth and Winton. Confederate forces at Plymouth made the first use of an ironclad warship, the CSS Albemarle.

After the war, agriculture suffered across the South, and the region was slow to change its economy. 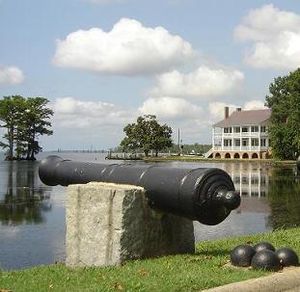 The following is a list of counties usually considered a part of the Inner Banks (listed alphabetically):

The following is a list of some of the towns and communities in the Inner Banks (listed alphabetically): 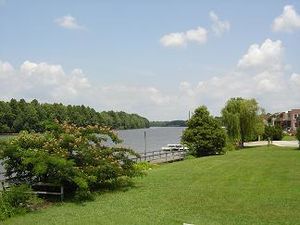