Innerleithen (Scottish Gaelic: Inbhir Leitheann[1]) is a civil parish and a small town in the committee area of Tweeddale, in the Scottish Borders. It was formerly in the historic county of Peeblesshire or Tweeddale.

The name "Innerleithen" comes from the Scottish Gaelic meaning "confluence of the Leithen", because it is here that the river joins the Tweed. The prefix "Inner-/Inver-" (Inbhir-) is common in many Scottish placenames, such as Inverness. At this confluence, the Tweed flows approximately west-east, and the Leithen flows from the north.

The layout of the town is dominated by the surrounding hills. To the north the peaked hill of Lee Pen (502m), and its southerly spur Caerlee Hill (258m). To the east the rounded hill of Pirn Craig (363m) - locally known as "Rocky" - and its townward spur of Windy Knowe (155m), also known as "Pirn Hill", and to the south, beyond the Tweed, the extended of ridge of Plora Craig rises sharply from the southerly bank. Thus the town has grown in an inverted 'T' shape north up the valley of the Leithen and east-west along north bank flood plain of the Tweed.

The area occupied by the town has been inhabited since pre-Roman times. The remains of an Iron-Age hill fort are visible atop Caerlee Hill, in the form of defensive ditchworks. Ditchworks are also visible on the hill of Windy Knowe and, whilst there is some local speculation that these belong to an unusual round Roman hill fort, they are in fact typical of an indigenous Iron Age hill fort. Crop marks from aerial photographs of the 1950s suggest the existence of a semi-permanent Roman marching camp on the flood plain by the river Tweed at Toll Wood (near Traquair) and at nearby Eshiels.

The town is said to have been founded by an itinerant pilgrim monk called St. Ronan in A.D.737, who came to Innerleithen via the River Tweed in a coracle. Monks would certainly have travelled the natural route of the Clyde and Tweed valleys on their way between the religious centres of Iona and Holy Island. A Celtic stone carved with cup and rings/channels, known as the Runic Cross (although there are neither runes on it, nor any evidence that it was a cross shaft) was found on the slopes of the Leithen valley suggesting that a church existed during the Early Middle Ages. The stone can be viewed in the courtyard of the parish church on Leithen Road. 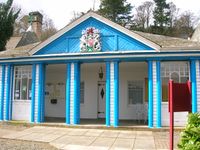 In the local legend of the town's founding "St. Ronan Cleik't the Deil by the hind leg and banished him", possibly a metaphor for the monks bringing Christian learning back into these regions.

The legend was actually formalised by Sir Walter Scott and was later instigated in a town festival called "The Cleikum Ceremonies" in 1901. This was seen as a way to prevent the legends and folktales of the region from dying out. Scott wrote about the town in his 1824 novel St. Ronan's Well.

The Ceremonies continue to this day as part of St. Ronans Borders Games, also known as 'Games Week' (although, in reality, this is a 10-day-long festival). The Border Games date from 1827 and are the oldest organised sports meeting in Scotland. These happen in the first and second week in July and draw significant local and tourist participation.

Accounts of Innerleithen date from the 12th century, when it was recorded as "Inverlethane". It is said that a son of King Malcolm IV of Scotland (who was staying at Traquair House on a hunting trip), drowned accidentally in a deep pool at the confluence of the rivers Leithen and Tweed. The body was recovered by locals and taken to the church, in recognition of which the King bestowed the right of sanctuary to the land. The pool where the drowning is alleged to have taken place is still known locally as "The Droont Pool". However, it should be borne in mind that Malcolm IV is reported to have died childless at the age of twenty five, so the tale is questionable.

Later written accounts of the town date from the 15th century when it is referred to as "Henderleithen", and at this point it is recorded as a hamlet within the Parish of Traquair, which with its major baronial house was centre of the Parish.

The industrial revolution and wool milling saw Innerleithen outgrow Traquair and become the larger village. Innerleithen's population rose from 1130 (1861 census) to it current level of over 2500. At one point it had five significant wool mills (or hosieries). Of these, only one, Caerlee Mills remained with a reduced workforce of 33 after its owners JJ & HB Cashmere went into administration in 2010, finally closing in April 2013.

The industries which have supplanted the wool industry and allowed the town keep growing have been primarily tourism, of which Mountain Biking plays a huge part, and secondly timber and forestry. Additionally, a significant proportion of the population now commutes to work, including to Edinburgh some 30 miles north. 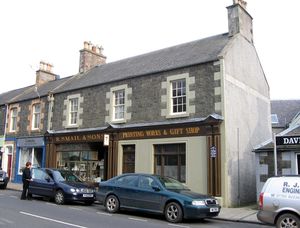 Tourist attractions within the town include Robert Smail's Printing Works and St. Ronans Wells, and nearby Traquair House. Popular tourist activities in the area include golfing (the town has a 9-hole golf course), walking and mountain biking with 2 excellent routes including a world standard downhill route. The area is famous for fly fishing (both trout and salmon), and there is a fish ladder near the golf course, just outside the town boundary on Leithen Road. This proves a popular stopping point for locals and visitors to watch the autumn and winter runs of salmon.

The town has several small hotels including the Traquair Arms Hotel and the St. Ronans Hotel. There are also numerous private houses offering bed and breakfast, a camp site and a caravan site.

The town hosts the annual Innerleithen Music Festival in the Memorial Hall.[2] In addition, it has an active amateur operatic society which stages an annual production.

Innerleithen has several bookshops, the largest of which holds nearly 19,000 titles and is one of the largest in the Scottish Borders.

Innerleithen is also popular for mountain biking and, together with Glentress, forms one of the Forestry Commission's "7 Stanes". It is very popular with downhill bikers and has hosted national events since the early 1990s. Current gems include the "Matador" and "Make or Break". In addition to the downhill trails, there is a long cross-country loop that climbs to the top of the Minch Moor before descending through some excellent trails. The Innerleithen XC trails are more demanding than those found at Glentress.

Most common surnames in Innerleithen at the time of the United Kingdom Census of 1881,[3] by order of incidence: