From Infogalactic: the planetary knowledge core
Jump to: navigation, search
For the American legal organization, see American Inns of Court. 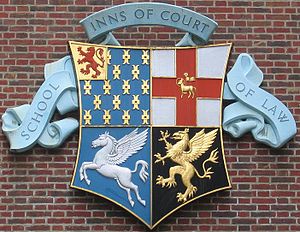 The Inns of Court in London are the professional associations for barristers in England and Wales. All such barristers must belong to one such association.[1] They have supervisory and disciplinary functions over their members. The Inns also provide libraries, dining facilities and professional accommodation. Each also has a church or chapel attached to it and is a self-contained precinct where barristers traditionally train and practise, although growth in the legal profession, together with a desire to practise from more modern accommodation[citation needed] caused many barristers' chambers to move outside the precincts of the Inns of Court in the late 20th century.

Several centuries ago the Inns of Court were any of a sizable number of buildings or precincts where barristers traditionally lodged, trained and carried on their profession.

Over the centuries the number of active Inns of Court was reduced to the present four:

Lincoln's Inn is able to trace its official records to 1422,[2] whilst the Inner and Middle Temples are recorded as separate societies in a manuscript yearbook of 1388.[3] The records of Gray's Inn begin in 1569, but teaching is thought to have begun there in the late fourteenth century.[4] However, by tradition, none of the Inns claims to be the oldest of the four.[citation needed]

The Inns are near the western boundary of the City of London; nearby are the Royal Courts of Justice (opened in 1882; previously sat in Westminster Hall), which were placed in the legal quarter of London for convenience. Each Inn is a substantial complex with a great hall, chapel, libraries, sets of chambers for many hundreds of barristers, and gardens, and covers several acres. The layout is similar to that of an "Oxbridge" college. The "chambers" were originally used as residences as well as business premises by many of the barristers, but today, with a small number of exceptions, they serve as offices only.

Each of the four Inns of Court has three ordinary grades of membership: students, barristers, and Masters of the Bench or "benchers". The benchers constitute the governing body for each Inn and appoint new members from among existing barrister members. As a rule, any barrister member of the Inn is eligible for appointment. In practice, appointments are made of senior members of the Bar, usually QCs, or High Court judges or those who carry out work on behalf of the Inn, be it on committees or through the training of students and other junior members.

Prospective students may choose which Inn to apply to for membership, but can only apply to one Inn for scholarships. An applicant may choose a particular Inn because he or she knows someone already a member, or it has a student association at their university. It makes no long-term difference which Inn a barrister joins.

The senior bencher of each Inn is the Treasurer, a position which is held for one year only. Each Inn usually also has at least one Royal Bencher. They may also appoint Honorary Benchers, from academics, the world of politics and overseas judiciary.

The Inns of Court no longer provide all the education and training needed by prospective barristers, who must pass the Bar Professional Training Course, but do provide supplementary education during the 'Bar School' year, pupillage and the early years of practice. All prospective Bar School students must be a member of one of the four Inns, and must attend twelve 'qualifying sessions' before being eligible to qualify as a barrister. Qualifying sessions traditionally comprise formal dinners followed by law-related talks, but increasingly the Inns offer training weekends that may count for several sessions' worth of attendance. The Inns still retain the sole right to call qualified students to the bar,[5] a right currently found in section 207(1) of the Legal Services Act 2007.

The Inns' disciplinary functions are carried out by a joint Council of the Inns of Court, which administers the disciplinary tribunals.[6] Barristers are prosecuted by the Bar Standards Board.

The four Inns are near one another in central London. Middle Temple and Inner Temple are liberties of the City of London, which means they are within the historic boundaries of the City but are not subject to its jurisdiction. They operate as their own local authorities. These two Inns neighbour each other and occupy the core of the Temple area. The closest Tube station is Temple.

Gray's Inn and Lincoln's Inn are in the London Borough of Camden (formerly in the Borough of Holborn) near the boundary with the City of London. They do not have the status of local authority. The nearest Tube station is Chancery Lane.

Another important inn, Serjeants' Inn, was dissolved in 1877 and its assets were, controversially, distributed amongst the existing members. The membership of the Inn had consisted of a small class of senior barristers called serjeants-at-law, who were selected from the members of the other four inns and had exclusive rights of audience in certain Courts. Their pre-eminence was affected by the new rank of Queen's Counsel, which was granted to barristers who were not serjeants. The serjeant's privileges were withdrawn by the government in the 19th century, no more serjeants were appointed, and they eventually died out. The area now known as Serjeants' Inn, one of two sites formerly occupied by the Serjeants, the other being in Chancery Lane, was purchased by the Inner Temple in 2002.

It was formerly the custom for senior judges to join Serjeants' Inn, thereby leaving the Inn in which they had practised as barristers. This meant that the Masters of the Bench of the four barristers' Inns of Court were mostly themselves barristers. Since there is now no Serjeants' Inn, judges remain in the Inns which they joined as students and belonged to as barristers. This has had the effect of making the majority of the Masters of the Bench senior judges, either because they become benchers when appointed as judges, or because they become judges after being appointed as benchers.

Since at least 1584, members of the Inns of Court have rallied to the defence of the realm during times of crisis. That tradition continues to this very day, in that 10 Stone Buildings in Lincoln's Inn has been the permanent home of the Inns of Court & City Yeomanry since the building was freed up by the abolition of the Clerks of Chancery in 1842.

There is also an Inn of Court of Northern Ireland. In the Republic of Ireland, there is only one Inn of Court, the Honorable Society of King's Inns.

From the late 1970s, U.S. Chief Justice Warren Burger led a movement to create Inns of Court in the United States, loosely modelled after the traditional English Inns. In 1985, he and others established the American Inns of Court Foundation to promote and formally charter local Inns of Court across the United States. Each local Inn is devoted to promoting professionalism, civility, ethics, and legal skills amongst the American bench and bar, in a collegial setting, through continuing education and mentoring.[7] At present, each major American city has more than one Inn of Court; for example, one Inn may be affiliated with a local law school, and another may be focused on a specific field of legal practice. American Inns of Court do not possess any real property. They are groups of judges, practicing attorneys, law professors and students who meet regularly (usually monthly) to discuss and debate issues relating to legal ethics and professionalism. American Inn of Court meetings typically consist of a shared meal and a programme presented by one of the Inn's pupillage teams.

The U.S. does not require attorneys to be members of an Inn of Court, and many of the equivalent functions are performed by state bar associations. Some states require attorneys to belong to the official bar association, e.g., the State Bar of Michigan, while other states, such as Illinois, do not make membership of an official bar association a compulsory condition of licensure. Neither voluntary professional associations (including the American Inns of Court) nor mandatory bar associations typically have any role in training or licensing of law students that would be comparable to that function of the four English Inns of Court in selection and training of new barristers.

While the American Inns of Court share a collegial relationship with the English Inns, there is no formal or legal relationship.[8][9] A Declaration of Friendship was signed by the English and American Inns of Court, establishing visitation procedures under which American Inn members can acquire a letter of introduction that will officially introduce them to the Inns in England and Ireland, with reciprocal procedures available for English and Irish barristers.[9][10] An annual six-week exchange program, known as the Pegasus Scholarships, was created to provide for young English barristers to travel to the United States, and young American Inn of Court members to travel to London, to learn about the legal system of the other jurisdiction.[11]