Innsbruck (German: [ˈʔɪnsbʁʊk], local pronunciation: [ˈʔɪnʃprʊk]) is the capital city of the federal state of Tyrol (Tirol) in western Austria. It is located in the Inn Valley at the junction with the Wipptal (Sill River), which provides access to the Brenner Pass, some 30 km (18.6 mi) to the south.

Innsbruck is an internationally renowned winter sports centre, and hosted the 1964 and 1976 Winter Olympics as well as the 1984 and 1988 Winter Paralympics. Innsbruck also hosted the first Winter Youth Olympics in 2012. The word bruck comes from the same root as the modern German word "Brücke" meaning "bridge" which leads to "the bridge over the Inn".[2]

Earliest traces suggest initial inhabitation in the early Stone Age. Surviving pre-Roman place names show that the area has been populated continuously. In the 4th century the Romans established the army station Veldidena (the name survives in today's urban district Wilten) at Oenipons (Innsbruck), to protect the economically important commercial road from Verona-Brenner-Augsburg.

The first mention of Innsbruck dates back to the name Oeni Pontum or Oeni Pons which is Latin for bridge (pons) over the Inn (Oenus), which was an important crossing point over the Inn river. The Counts of Andechs acquired the town in 1180. In 1248 the town passed into the hands of the Counts of Tyrol.[3] The city's seal and coat of arms show a bird's-eye view of the Inn bridge, a design used since 1267. The route over the Brenner Pass was then a major transport and communications link between the north and the south, and the easiest route across the Alps. The revenues generated by serving as a transit station enabled the city to flourish. 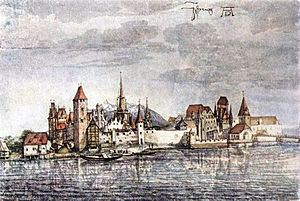 View of Innsbruck by Albrecht Dürer, 1495

Innsbruck became the capital of all Tyrol in 1429 and in the 15th century the city became a centre of European politics and culture as Emperor Maximilian I also resided in Innsbruck in the 1490s. The city benefited from the emperor's presence as can be seen for example in the Hofkirche. Here a funeral monument for Maximilian was planned and erected partly by his successors. The ensemble with a cenotaph and the bronze statues of real and mythical ancestors of the Habsburgian emperor are one of the main artistic monuments of Innsbruck. A regular postal service between Innsbruck and Mechelen was established in 1490 by the Thurn-und-Taxis-Post. 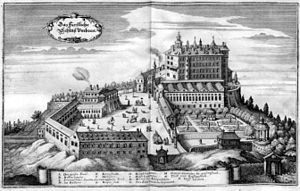 In 1564 Ferdinand II, Archduke of Austria received the rulership over Tirol and other Further Austrian possessions administrated from Innsbruck up to the 18th century. He had Schloss Ambras built and arranged there his unique Renaissance collections nowadays mainly part of Vienna's Kunsthistorisches Museum. Up to 1665 a stirps of the Habsburgian dynasty ruled in Innsbruck with an independent court. In the 1620s the first opera house north of the Alps was erected in Innsbruck (Dogana).

In 1669 the university was founded. Also as a compensation for the court as Emperor Leopold I again reigned from Vienna and the Tyrolean stirps of the Habsburg dynasty had ended in 1665.[clarification needed] 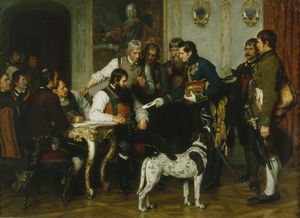 Andreas Hofer with his Consultants at the Hofburg by Franz Defregger, 1879

During the Napoleonic Wars Tyrol was ceded to Bavaria, ally of France. Andreas Hofer led a Tyrolean peasant army to victory in the Battles of Bergisel against the combined Bavarian and French forces, and then made Innsbruck the centre of his administration. The combined army later overran the Tyrolean militia army and until 1814 Innsbruck was part of Bavaria. After the Vienna Congress Austrian rule was restored. Until 1918, the town (one of the 4 autonomous towns in Tyrol) was part of the Austrian monarchy (Austria side after the compromise of 1867), head of the district of the same name, one of the 21 Bezirkshauptmannschaften in the Tyrol province.[4]

The Tyrolean hero Andreas Hofer was executed in Mantua; his remains were returned to Innsbruck in 1823 and interred in the Franciscan church.

In 1929, the first official Austrian Chess Championship was held in Innsbruck.

In 1938 Austria was annexed by Nazi Germany in the Anschluss. Between 1943 and April 1945, Innsbruck experienced twenty-two bomb attacks and suffered heavy damage. 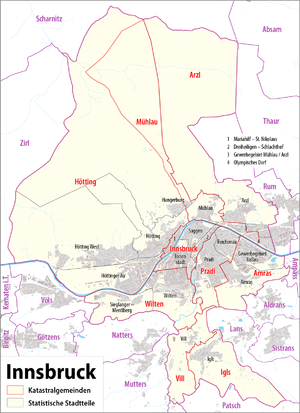 Innsbruck is divided into nine boroughs (cadastral settlements) that were formed from previously independent municipalities or villages.[5] These nine boroughs are further divided into twenty wards (cadastral districts). All wards are within one borough, except for the ward of Hungerburg (Upper Innsbruck), which is divided between two. For statistical purposes, Innsbruck is further divided into forty-two statistical units (Statistischer Bezirk) and 178 numbered blocks (Zählsprengel).[6]

The following are the nine boroughs with the population as of 31 October 2011:[7]

As with the rest of Central Europe, Innsbruck has an oceanic climate (Köppen classification: Cfb), although with continental influences (especially in winter) since it has larger annual temperature differences due to its location in the centre of the Continent and its position around mountainous terrains. Winters are cold (colder than those of most major European cities) and snowy. Winter nights can get frigid, occasionally dropping to −12 °C (10 °F).

Spring is brief; days start to get warm, often over 15 °C (59 °F), but nights remain cool or even freezing.

Summer is highly variable and unpredictable. Days can be cool 17 °C (63 °F) and rainy, or sunny and extremely hot, sometimes hitting 34 °C (93 °F). In summer, as expected for an alpine-influenced climate, the diurnal temperature variation is often very high as nights usually remain cool, being 12 °C (54 °F) on average, but sometimes dipping as low as 6 °C (43 °F). 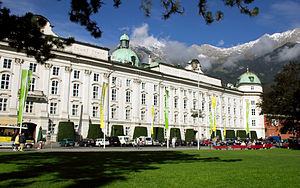 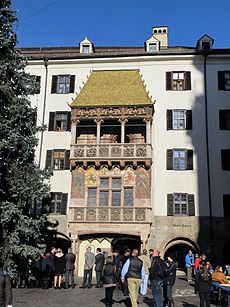 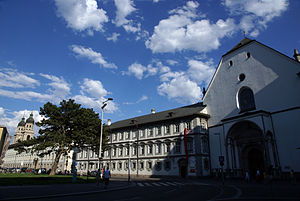 Tyrolean Folk Art Museum next to the Hofkirche in Innsbruck 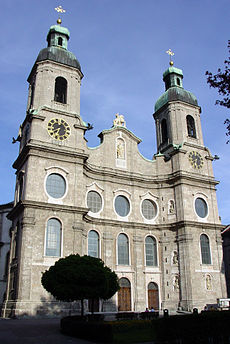 Innsbruck is a very popular tourist destination, organizing the following events every year: 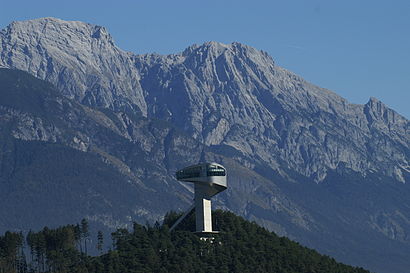 Due to its location between high mountains, Innsbruck serves as an ideal place for skiing in winter, and mountaineering in summer. There are several ski resorts around Innsbruck, with the Nordkette served by a cable car and additional chair lifts further up. Other ski resorts nearby include Axamer Lizum, Muttereralm, Patscherkofel, Igls, Seefeld, Tulfes and Stubai Valley. The glaciated terrain in the latter makes skiing possible even in summer months.

The Winter Olympic Games were held in Innsbruck twice, first in 1964, then again in 1976, when Colorado voters rejected a bond referendum in 1972 to finance the Denver games, originally awarded in 1970. The 1976 Winter Olympics were the last games held in the German-speaking Alps (Austria, Germany, or Switzerland).

Along with St. Moritz, Switzerland and Lake Placid, New York in the United States, it is one of three places which have twice hosted the Winter Games. It also hosted the 1984 and 1988 Winter Paralympics.

Other notable events held in Innsbruck include the Air & Style Snowboard Contest from 1994 to 1999 and 2008 and the Ice Hockey World Championship in 2005. Together with the city of Seefeld, Innsbruck organized the Winter Universiade in 2005. Innsbruck's Bergiselschanze is one of the hills of the famous Four Hills Tournament.

Innsbruck is home to the football club FC Wacker Innsbruck, which plays in the Austrian Football Bundesliga (first tier) in 2010–11. Former teams include the FC Swarovski Tirol and FC Tirol Innsbruck. FC Wacker Innsbruck's stadium, Tivoli Neu, is one of eight stadiums which hosted Euro 2008 which took place in Switzerland and Austria in June 2008.

The city also hosted an American Football final, Eurobowl XXII between the Swarco Raiders Tirol and the Raiffeisen Vikings Vienna.

Innsbruck is the cultural and economic centre of western Austria. It is also a substantial tourist centre, with more than a million overnight stays. Innsbruck is a university city, with several locally based colleges and universities.

In Innsbruck, there are some 78,000 employees and about 8,000 employers. Nearly 35,000 people commute every day into Innsbruck from the surrounding communities in the area. The unemployment rate for the year 2012 was 4.2%.[11]

Residential property is very expensive by national standards. The average price per square meter in Innsbruck is 4,430 € (2015), which is the second highest per square meter price among Austrian cities surpassed only by Salzburg (4,823 €), but followed by Vienna (3,980 €).[13] 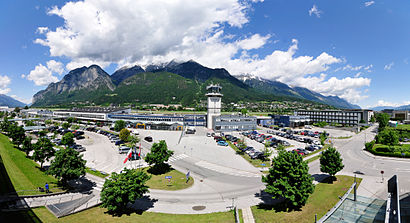 Innsbruck is located along the A12/A13 highway corridor, providing freeway access to Verona, Italy and Munich, Germany. The A12 and A13 converge near Innsbruck, at which point the A13 terminates.

Innsbruck Hauptbahnhof, the most important railway station of Innsbruck and Tyrol, is one of the busiest railway stations in Austria. It is served by the Lower Inn Valley line to Germany and eastern Austria, the Arlberg line to the west and the Brenner line, which connects northern Italy with southern Germany via the Brenner pass. Since December 2007 suburban services have been operated as the Innsbruck S-Bahn.

Innsbruck Airport is located in the suburb of Kranebitten, which is located in the west of the city. It provides services to airports including Frankfurt, London, Amsterdam and Vienna. It also handles regional flights around the Alps, as well as seasonal flights to other destinations. During the winter, activity increases significantly, due to the high number of skiers travelling to the region. It is the main base of Welcome Air and Austrian Airlines' regional carrier Tyrolean Airways. The airport is approximately 4 kilometres (2.5 mi) from the centre of Innsbruck. 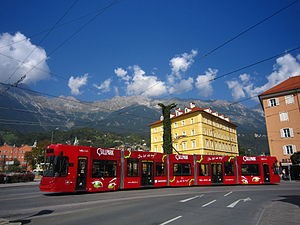 Local public transport is provided by Innsbrucker Verkehrsbetriebe (IVB), a public authority operating a network of bus and tram routes. The metre-gauge tram network consists of two city lines, 1 and 3, and two lines serving the surrounding area: line 6, the Innsbrucker Mittelgebirgsbahn to Igls, and line STB, the Stubaitalbahn running through the Stubai Valley to Fulpmes. The network is planned to be enlarged during the coming years to reach Hall in Tirol in the east and Völs in the west (thus replacing a former tram line [closed in the late 1960s] from Innsbruck to Solbad Hall, as Hall in Tirol was then known). Numerous bus lines serve the inner city and connect it with surrounding areas. Until 2007 the bus network included two trolleybus routes, but these were abandoned in preparation for planned expansion of the tram network.

In December 2007, the Hungerburgbahn, a funicular service to the district of Hungerburg, was reopened after a two-year closure for extensive rebuilding, with partial realignment and a new extension across the Inn River and into central Innsbruck. The line was also equipped with new vehicles. The rebuilt line is operated by a private company, Innsbrucker Nordkettenbahnen.

Innsbruck is home to the oldest grammar school (Gymnasium) of Western Austria, the "Akademisches Gymnasium Innsbruck". The school was founded in 1562 by the Jesuit order and was the precursor of the university, founded in 1669.

Innsbruck hosts several universities. The most well-known are the University of Innsbruck (Leopold-Franzens-Universität), the Innsbruck Medical University, and the university of applied sciences MCI Management Center Innsbruck.

The results of the 2012 local elections were:

The Austrian Service Abroad is a NGO, which provides positions for an alternative Austrian national service at 85 organizations in 35 countries worldwide in the sectors Holocaust Memorial Service, Social Service and Peace Service. It was founded by Andreas Maislinger and Andreas Hörtnagl in 1998 and is based in Innsbruck.