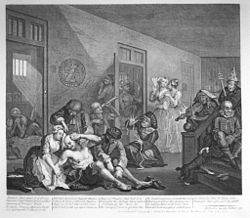 Insanity, craziness or madness is a spectrum of behaviors characterized by certain abnormal mental or behavioral patterns. Insanity may manifest as violations of societal norms, including a person becoming a danger to themselves or others, though not all such acts are considered insanity; likewise, not all acts showing indifference toward societal norms are acts of insanity. In modern usage, insanity is most commonly encountered as an informal unscientific term denoting mental instability, or in the narrow legal context of the insanity defense. In the medical profession the term is now avoided in favor of diagnoses of specific mental disorders; the presence of delusions or hallucinations is broadly referred to as psychosis.[1] When discussing mental illness in general terms, "psychopathology" is considered a preferred descriptor.[2]

In English, the word "sane" derives from the Latin adjective sanus meaning "healthy". Juvenal's phrase mens sana in corpore sano is often translated to mean a "healthy mind in a healthy body". From this perspective, insanity can be considered as poor health of the mind, not necessarily of the brain as an organ (although that can affect mental health), but rather refers to defective function of mental processes such as reasoning. Another Latin phrase related to our current concept of sanity is "compos mentis" (lit. "sound of mind"), and a euphemistic term for insanity is "non compos mentis". In law, mens rea means having had criminal intent, or a guilty mind, when the act (actus reus) was committed.

A more informal use of the term insanity is to denote something considered highly unique, passionate or extreme, including in a positive sense. The term may also be used as an attempt to discredit or criticise particular ideas, beliefs, principles, desires, personal feelings, attitudes, or their proponents, such as in politics and religion.

Madness, the non-legal word for insanity, has been recognized throughout history in every known society. Primitive cultures turned to witch doctors or shamans to apply magic, herbal mixtures, or folk medicine to rid deranged persons of evil spirits or bizarre behavior, for example.[3] Archaeologists have unearthed skulls (at least 7000 years old) that have small round holes bored in them using flint tools. It has been conjectured that the subject may have been thought to have been possessed by devils which the holes would allow to escape.[4] However, more recent research on the historical practice of trepanning supports the hypothesis that this procedure was medical in nature and intended as means of treating cranial trauma.[5]

The Greeks replaced concepts of the supernatural with a secular view, believing that afflictions of the mind did not differ from diseases of the body. They saw mental and physical illness as a result of natural causes and an imbalance in bodily humors. Hippocrates frequently wrote that an excess of black bile resulted in irrational thinking and behavior.[6]

Romans made further contributions to psychiatry, in particular the precursor to contemporary practice. They put forth the idea that strong emotions could lead to bodily ailments, the basis of today’s theory of psychosomatic illness. The Romans also supported humane treatment of the mentally ill, and to support such codified into law the principle of insanity as a mitigation of responsibility for criminal acts,[7] although the criterion for insanity was sharply set as the defendant had to be found "non compos mentis", a term meaning with "not sound of mind".[8]

From the Middle Ages forward

The Middle Ages, however, witnessed the end of the progressive ideas of the Greeks and Romans.[clarification needed]

During the 18th century, the French and the British introduced humane treatment of the clinically insane,[9] though the criteria for diagnosis and placement in an asylum were considerably looser than today, often including such conditions as Speech disorder, speech impediments, epilepsy and depression.

Europe's oldest asylum is the Bethlem Royal Hospital of London, also known as Bedlam, which began admitting the mentally ill in 1403. The first American asylum was built in Williamsburg, Virginia, circa 1773. Before the 19th century these hospitals were used to isolate the mentally ill or the socially ostracized from society rather than cure them or maintain their health. Pictures from this era portrayed patients bound with rope or chains, often to beds or walls, or restrained in straitjackets.

Insanity is no longer considered a medical diagnosis but is a legal term in the United States, stemming from its original use in common law.[10] The disorders formerly encompassed by the term covered a wide range of mental disorders now diagnosed as organic brain syndromes, schizophrenia, bipolar disorder and other psychotic disorders.[1]

Legal use of the term

In United States criminal law, insanity may serve as an affirmative defense to criminal acts and thus does not need to negate an element of the prosecution's case such as general or specific intent.[11] The States differ somewhat in their definition of insanity but most follow the guidelines of the Model Penal Code. All jurisdictions require a sanity evaluation to address the question first of whether or not the defendant has a mental illness.

Most courts accept a major mental illness such as psychosis but will not accept the diagnosis of a personality disorder for the purposes of an insanity defense. The second question is whether the mental illness interfered with the defendant's ability to distinguish right from wrong. That is, did the defendant know that the alleged behavior was against the law at the time the offense was committed.

The forensic mental health specialists submit their evaluations to the court. Since the question of sanity or insanity is a legal question and not a medical one, the judge and or jury will make the final decision regarding the defendant's status regarding an insanity defense.[12][13]

In most jurisdictions within the United States, if the insanity plea is accepted, the defendant is committed to a psychiatric institution for at least 60 days for further evaluation, and then reevaluated at least yearly after that.

Insanity is generally no defense in a civil lawsuit. However, in civil cases, the insanity of the plaintiff can toll the statute of limitations for filing a suit until the plaintiff has recovered from this condition, or until a statute of repose has run.

Feigned insanity is the simulation of mental illness in order to deceive. Amongst other purposes, insanity is feigned in order to avoid or lessen the consequences of a confrontation or conviction for an alleged crime. A number of treatises on medical jurisprudence were written during the nineteenth century, the most famous of which was Isaac Ray in 1838 (fifth edition 1871); others include Ryan (1832), Taylor (1845), Wharton and Stille (1855), Ordronaux (1869), Meymott (1882). The typical techniques as outlined in these works are the background for Dr. Neil S. Kaye's widely recognized guidelines that indicate an attempt to feign insanity.[14]

One particularly famous example of someone feigning insanity was the case of Mafia boss Vincent Gigante, who pretended for years to be suffering from dementia, and was often seen wandering aimlessly around his neighborhood in his pajamas muttering to himself. However, testimony from informants and surveillance showed that Gigante was in full control of his faculties the whole time, and ruled over his Mafia family with an iron fist.[15]

Today feigned insanity is considered malingering. In a 2005 court case, United States v. Binion, the defendant was prosecuted and convicted for obstruction of justice (adding to his original sentence) because he feigned insanity in a Competency to Stand Trial evaluation.