In American and Canadian football, instant replay is a method of reviewing a play using cameras at various angles to determine the accuracy of the initial call of the officials. An instant replay can take place in the event of a close or otherwise controversial call, either at the request of a team's head coach (with limitations) or the officials themselves.

There are restrictions on what types of plays can be reviewed. In general, most penalty calls or lack thereof cannot be reviewed, nor can a play that is whistled dead by the officials before the play could come to its rightful end.

American and Canadian football leagues vary in their application and use of instant replay review.

Bill Cowher, then head coach of the Pittsburgh Steelers, throws the red challenge flag (visible in the upper left corner of the picture), indicating his desire to challenge the officials' ruling.

The National Football League first adopted a limited Instant Replay system in 1986,[1] though the current system began in 1999, bringing in the opportunity to "challenge" on-field calls of plays. The current system mirrors a system used by the now defunct USFL in 1985. Each coach is allowed two opportunities per game to make a coach's challenge. Before the 2004 NFL season, the instant replay rule was slightly changed to allow a third challenge if both of the original two challenges were successful.

A challenge can only be made on certain reviewable calls on plays that begin before the two-minute warning and only when a team has at least one time-out remaining in the half. Up until the 2005 season, coaches could signal a challenge via an electronic pager, now used only by the replay assistant.[2] The coaches now throw a red flag onto the field, indicating the challenge to the referees. This red flag was originally the "backup plan" if the pager were to fail, but it has become the more popular option among NFL coaches to signal a replay request.

The referee has 60 seconds to watch the instant replay of the play and decide if the original call was correct. The referee must see "incontrovertible visual evidence" for a call to be overturned. If the challenge fails, the original ruling stands and the challenging team is charged with a timeout. If the challenge overrules the previous call, the call is reversed; should there have been an official score change, the score will be changed again, resulting in the original score and with no loss of a timeout.

Because of the limited number of challenges, and the possible penalty of a lost timeout, coaches typically reserve their challenges for key plays. A questionable call may not be challenged once the next play is underway, so coaches may be forced to make a quick decision without the benefit of seeing a replay on television or on the stadium screen. If a questionable call is made in favor of the offense, then the offense will often line up and snap the ball quickly to prevent the opposing coach from challenging the call. Often players on the field will signal to the coach if they believe the play should be challenged.

During a scoring play (starting in 2011), turnovers (starting in 2012), or after the two-minute warning of each half, and in overtime, reviews can only take place if the replay assistant, who sits in the press box and monitors the network broadcast of the game, determines that a play needs review; coaches may not challenge during these times. In those cases, the replay assistant will contact the referee by a specialized electronic pager with a vibrating alert. If a review takes place during that time while the clock is running, the clock will stop for the review, and then it will start running once the ball is set and ready for play. Starting with the 2010 season, any reviews with the clock running inside one minute will have a 10-second rundown, which can be voided if either team uses a timeout.

One concern about replay that was addressed some years ago was the situation where a coach would seek a review of a non-challengeable call (such as being forced out of bounds, or in some cases to challenge a runner down by contact). Before the rule was clarified, a team would lose the challenge and a time-out. The current rule does not penalize a team in such a case, provided the rule is not abused or taken advantage of. 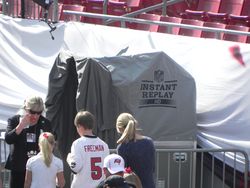 The NFL replay system currently only covers the following situations:

If a play is overturned, the official is also responsible for making any related revisions to the game clock if applicable, especially in late, game-ending situations. For instance, if a player makes a reception and runs a long distance, several seconds may run off the game clock. If the play is challenged and the catch overturned, the game clock would be reset to have stopped at the moment of incompletion (presumably adding time back to the clock).

Note that the spot of the ball may be challenged in certain cases. In such cases, a decision to respot the football is not enough to win the challenge; only when the ball is respotted and the ruling on the field is reversed by remeasurement is the challenging team not charged a timeout.

Some unusual, and confusing sequences of events can occur during replay stoppages, and most have been addressed through rules clarifications. For instance, if a team commits a delay of game penalty (before the snap), the opposing team still has the opportunity to challenge, provided it is done before the ensuing snap. Also, inside the two-minute warning, if a team calls a timeout in the normal course of play, but the replay assistant calls for a challenge of that play, the initial timeout is ignored and restored in favor of the replay stoppage.

The current replay system replaced a previous system used from 1986 through 1991, when a procedure similar to that of college football was used. In 1987 commissioner Pete Rozelle saved the system for another season; in 1988 Pittsburgh Steelers owner Dan Rooney saved it.[3] From before 1986, and from 1992 to 1998, no replay system was used. While there is occasional controversy over the appropriateness of overturned calls, the system is generally accepted as an effective and necessary way to ensure a fair game.

Despite the rules that a play cannot be challenged if another play was run, it has happened on at least one occasion under the current rules. In 2001, the Cleveland Browns were driving toward the east end zone of Cleveland Browns Stadium against the Jacksonville Jaguars for what would have been the winning score. A controversial call on fourth down gave the Jaguars the ball. Browns' receiver Quincy Morgan had caught a pass for a first down on 4th and 1. After Tim Couch spiked the ball on the next play, referee Terry McAulay reviewed Morgan's catch, claiming that the replay officials had buzzed him before Couch spiked the ball. Upon reviewing the play, McAulay determined that Morgan never had control of the ball, thus the pass was incomplete, and the Jaguars were awarded the ball via turnover on downs. Fans in the Dawg Pound began throwing plastic beer bottles and other objects on the field, in an incident dubbed "Bottlegate".[4] McAulay declared the game over and sent the teams to the locker rooms. NFL Commissioner Paul Tagliabue then called to override the referee's decision, sending the players back onto the field, where the Jaguars ran out the last seconds under a hail of debris.[5] The loss would have major playoff implications for the Browns, who dropped to 6-7, although the team would've finished out of the playoffs had they won the game anyway. 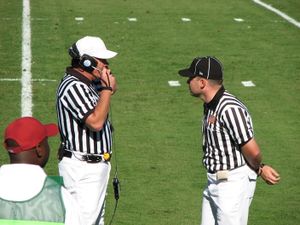 In 2006, the NCAA Football Rules Committee enacted instant replay guidelines and added them to the football playing rules. For games involving two schools from the same conference, league policy determines whether replay will be used. For non-conference games, the home team makes the determination.

Plays involving the sideline, goal line, end zone and end line, as well as other detectable situations, are reviewable (e.g., fumble/no fumble, pass complete/incomplete, touchdown/no touchdown, runner down/not down, player or ball inbounds/out of bounds, clock adjustments). Most fouls (e.g., holding, offside, pass interference) are not reviewable, except that in 2006, illegal forward passes, handoffs and punts from beyond the line of scrimmage, and too many players on the field are reviewable and the foul may be called after replay review. Also, while the foul of pass interference is not reviewable, it can be overturned on review based on touching of the pass. By rule, pass interference cannot apply if a pass has been touched by any player before the foul occurs, and the touching of a pass is a reviewable play at its conclusion from a secure booth in the press box. Most plays are routine and the game continues without interruption. If, however, the following criteria are met, the Replay Official may interrupt the contest by paging the game officials to stop the game before the next play starts. The criteria are:

After reviewing the play from available video angles, the Replay Official decides if the call should be upheld or overturned. If the call is overturned, the Replay Official provides the proper information to restart the game, such as the team in possession, the yardline where the ball should be placed, the correct down and distance, and the correct time on the stadium clock. Should there have been an official score change, the score will be changed again, resulting in the original score.

College football instant replay was started by the Big Ten Conference in the 2004 season because of what happened in the 2001 Michigan vs. Michigan State football game, when reviews were used experimentally in the Big Ten Conference only. In the 2005 season, all conferences were allowed to use instant replay. Among Division I Football Bowl Subdivision (see Division I-A) conferences, the Atlantic Coast Conference, Big East, Big Ten, Big 12, Conference USA, MAC, Mountain West Conference, Pac-10, and SEC used replay in 2005. The Sun Belt and Western Athletic did not.

In 2005, the Big 12 initially sought to provide field monitors which would allow the on-field referee to assist the replay official; however, by the first game of the season, they decided to only provide equipment to the instant replay booth. Conference USA used a similar system, but the on-field referee made the decision after viewing a TV monitor on the sideline. The Mountain West Conference was the only league to allow a head coach's challenge. Each head coach got one challenge per half. If the call was overturned, the challenging coach kept his timeout and got a second challenge for that half. If not, the challenging coach lost one of his three timeouts for the half. No more than two challenges per half per coach were allowed.

There is not currently an instant replay equipment standard, each conference must choose (and purchase) its own equipment. Therefore, systems are quite disparate: they can be as complex as the high-tech custom systems similar as those used in the NFL to as simple as several large screens hooked to a digital video recorder using the direct-to-air feed of the broadcasting entity televising the game or a venue's internal coverage unit.

Instant replay was used in post-season games for the first time in the 2005 season. It was used in all 28 bowl games as well as the Division I Football Championship Subdivision (FCS, née I-AA), Division II and Division III national championship playoff games.

The Canadian Football League board of governors approved the use of instant replay starting in 2006.[6] The CFL system appears to be modeled largely on the NFL's, although some differences have been incorporated to accommodate differences between the two codes: