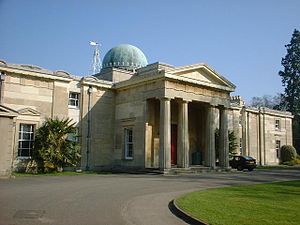 The Institute of Astronomy (IoA) is the largest of the three astronomy departments in the University of Cambridge, and one of the largest astronomy sites in the UK. Around 180 academics, postdocs, visitors and assistant staff work at the department.[2]

Research at the department is made in a number of scientific areas, including exoplanets, stars, star clusters, cosmology, gravitational-wave astronomy, the high-redshift universe, AGN, galaxies and galaxy clusters.[3] This is a mixture of observational astronomy, over the entire electromagnetic spectrum, computational theoretical astronomy, and analytic theoretical research.

The Kavli Institute for Cosmology is also located on the department site.[4] This Institute has an emphasis on The Universe at High Redshifts. The Cavendish Astrophysics Group are based in the Battcock Centre, a building in the same grounds. 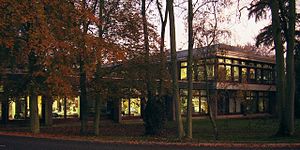 Institute of Astronomy Hoyle Building in the evening

The Institute was formed in 1972 from the amalgamation of earlier institutions:

The department teaches 3rd and 4th year undergraduates as part of the Natural Sciences Tripos or Mathematical Tripos. In addition, there are around 12 to 18 graduate PhD and masters students at the department per year, mainly funded by the STFC. The graduate programme is particularly unusual in the UK as the students are free to choose their own PhD supervisor or adviser from the staff at the department, and this choice is often made as late as the end of their first term.

A (incomplete) list of notable current members of the department.

Here are some notable members of the Department and its former institutes. 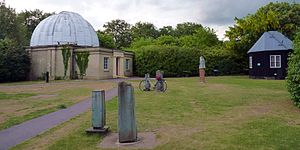 Observatory buildings containing the Northumberland Telescope (left) and Thorrowgood Telescope (right) at the Institute of Astronomy of the University of Cambridge. Covered structures in the foreground are mounts for portable telescopes.

The Institute houses several telescopes on its site. Although some scientific work is done with the telescopes, they are mostly used for public observing and astronomical societies. The poor weather and light-pollution in Cambridge makes most modern astronomy difficult. The telescopes on the site include:

The Institute's former 24" Schmidt Camera was donated to the Spaceguard Centre in June 2009. 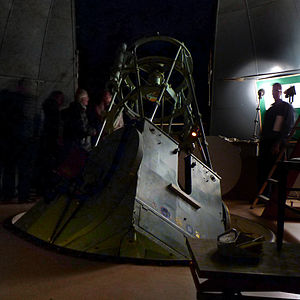 The 36-inch telescope being used for the 2011 Cambridge Astronomy Association Introduction to Astronomy course.[8]

The department holds a number of events involving the general public in astronomy. These include/ have included:

The Institute library is housed in the old Cambridge Observatory building. It is a specialist library concentrating on the subjects of astronomy, astrophysics and cosmology. The collection has approximately 17,000 books and subscribes to about 80 current journals. The Library also has a collection of rare astronomical books, many of which belonged to John Couch Adams.[13]

Among the significant contributions to astronomy made by the institute, the now decommissioned Automatic Plate Measuring (APM) machine was used to create a major catalogue of astronomical objects in the northern sky. [14]