The Institution of Mechanical Engineers (IMechE) is an independent engineering society, headquartered in central London, that represents mechanical engineers. With over 106,000 members in 140 countries, working across industries such as railway, automotive, aerospace, manufacturing, energy, biomedical and construction, the Institution is licensed by the Engineering Council (EngC) to assess candidates for inclusion on its Register of Chartered Engineers.

The Institution was founded at the Queen's Hotel, Birmingham, by George Stephenson in 1847 (following an informal meeting at locomotive designer Charles Beyer's house in Cecil Street, Manchester). It received a Royal Charter in 1930. The Institution's headquarters, purpose-built for the Institution in 1899, are situated at One Birdcage Walk, London. The first woman to be elected to the Institution was Verena Holmes in 1919.[citation needed] 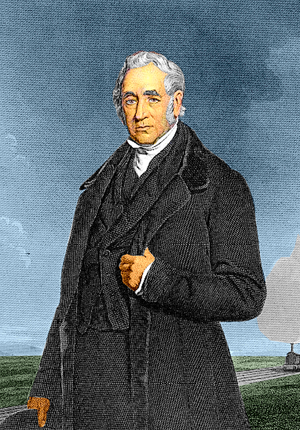 Charles Beyer proposed that George Stephenson become the Institution's first President in 1847,[3] followed by his son, Robert Stephenson, in 1849. Beyer became Vice President and was one of the first to present papers to the Institution;[4] Charles Geach was the IMechE's first treasurer. Throughout the 19th and 20th Centuries some of Britain's most notable engineers held the position of President, including Joseph Whitworth, Carl Wilhelm Siemens and Sir Harry Ricardo. It operated from premises in Birmingham until 1877 when it moved to London, taking up its present headquarters on Birdcage Walk in 1899.[5] 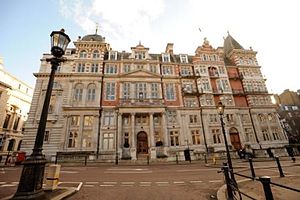 Upon its move to London in 1877, the Institution rented premises at No 10 Victoria Chambers, where it remained for 20 years. In 1895 the Institution bought a plot of land at Storey's Gate, on the eastern end of Birdcage Walk, for £9,500.[6] Architect Basil Slade looked to the newly completed Admiralty buildings facing the site for inspiration. The building was designed in the Queen Anne, 'streaky bacon', style in red brick and Portland stone. Inside, there were several features that were state of the art for the time, including a telephone, a 54-inch fan in the lecture theatre for driving air into the building; an electric lift from the Otis Elevator Company, and a Synchronome master-clock, which controlled all house timepieces. In 1933 architect James Miller, who also designed the neighbouring Institution of Civil Engineers, remodelled the building, expanding the library and introducing electric lighting.

The building would go on to host the first public presentation of Frank Whittle's jet engine in 1945.[7] In 1943 it became the venue for the Royal Electrical and Mechanical Engineers' (REME) planning of Operation Overlord and the invasion of Normandy.[8]

Today One Birdcage Walk hosts events, lectures, seminars and meetings in 17 conference and meeting rooms named after notable former members of the Institution, such as Frank Whittle, George Stephenson and Charles Parsons.

The following are membership grades with post-nominals :

The Engineering Heritage Awards were created in 1984 to help recognise and promote the value of artefacts, locations, collections and landmarks of significant engineering importance. 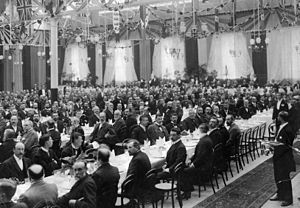 Annual dinner of the Institution in the carriage works of the Midland Railway at Derby in 1898. Samuel Johnson, the railway's Chief Mechanical Engineer was the institution president.

As of 2014[update], there has been 129 presidents of the Institution, who since 1922 have been elected annually for one year. The first president was George Stephenson, followed by his son Robert. Joseph Whitworth, John Penn and William Armstrong are the only persons to have served two terms. Pamela Liversidge in 1997-98 was the first female president and Professor Isobel Pollock became the second in May 2012. 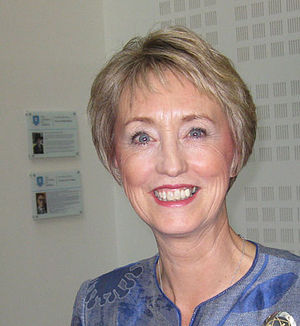 The Railway Division was formed in 1969 when IMechE amalgamated with the Institution of Locomotive Engineers.[23]