Balseiro Institute (Spanish: Instituto Balseiro) is an academic institution chartered by the National University of Cuyo and the National Atomic Energy Commission. It is located in Bariloche, Río Negro province, Argentina. The Instituto Balseiro has become a centre of world-class science. Its character and creativity, however, are distinctly Latin American.[1] Distinguished physicists, as Juan Maldacena, have studied at this institute.

File:Balseiro institute.jpg
One of the Classroom Buildings at the Instituto Balseiro. 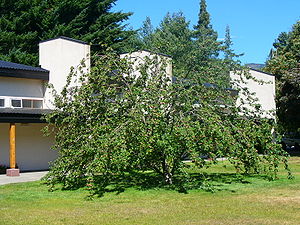 The center was established as the Instituto de Física de Bariloche on April 22, 1955, as a joint project of the National Atomic Energy Commission and the National University of Cuyo; the former administers the Bariloche Atomic Centre, whose work led to the first research reactor in Latin America (1957), as well as the region's first commercial reactor, Atucha I, in 1974. The institute was renamed in honor of physicist Dr. José Antonio Balseiro in 1962. The institute admits students who have completed two years of university studies (either in Physics or Engineering) and undergo a rigorous admission procedure.

The first graduates were members of the Physics class of 1958. In the 1970s, Balseiro became the only institute in Argentina to grant degrees in Nuclear Engineering, as the country was stepping up its nuclear program with the incorporation of the Embalse and Atucha II, as well as continued research activity in the Constituyentes and Bariloche reactors. It's considered the best Experimental Physics and Nuclear Engineering study centres of Latin America, as well as a very prestigious one worldwide.