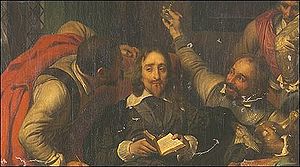 An insult is an expression, statement (or sometimes behavior) which is disrespectful or scornful. Insults [1] may be intentional or accidental. An insult may be factual, but at the same time pejorative, such as the word "inbred".

Lacan considered insults a primary form of social interaction, central to the imaginary order - 'a situation that is symbolised in the "Yah-boo, so are you" of the transitivist quarrel, the original form of aggressive communication'.[2]

Erving Goffman points out that every 'crack or remark set up the possibility of a counter-riposte, topper, or squelch, that is, a comeback'.[3] He cites the example of possible interchanges at a dance in a school gym:

Some examples of backhanded compliments may be:

Verbal insults often take a phallic form; this includes many of the more offensive profanity.[7][8]

The flyting was a formalized sequence of literary insults: 'invective or flyting, the literary equivalent of the spell-binding curse, uses similar incantatory devices for opposite reasons, as in Dunbar's Flyting with Kennedy '.[9]

'A little-known survival of the ancient "flytings," or contests-in-insults of the Anglo-Scottish bards, is the type of xenophobic humor once known as "water wit" in which passengers in small boats crossing the Thames...would insult each other grossly, in all the untouchable safety of being able to get away fast'.[10]

Samuel Johnson once triumphed in such an exchange: 'a fellow having attacked him with some coarse raillery, Johnson answered him thus, "Sir, your wife, under pretence of keeping a bawdy-house, is a receiver of stolen goods"'.[11]

Various typologies of insults have been proposed over the years. Desmond Morris, noting that 'almost any action can operate as an Insult Signal if it is performed out of its appropriate context - at the wrong time or in the wrong place' - classes such signals in ten 'basic categories: 1. Disinterest Signals...2. Boredom Signals...3. Impatience Signals...4. Superiority Signals...5. Deformed-compliment Signals...6. Mock-discomfort Signals...7. Rejection Signals....8. Mockery Signals...9. Symbolic Insults...10. Dirt Signals'.[12]

Elizabethans took great interest in such analyses, distinguishing out, for example, the 'fleering frump...when we give a mock with a scornful countenance as in some smiling sort looking aside or by drawing the lip awry, or shrinking up the nose'.[13] Shakespeare himself set up an insult-hierarchy of seven-fold 'degrees. The first, the Retort Courteous; the second, the Quip Modest; the third, the Reply Churlish; the fourth, the Reproof Valiant; the fifth, the Countercheck Quarrelsome; the sixth, the Lie with Circumstance; the seventh, the Lie Direct'.[14]

Sociologists[who?] suggest that insults are often an indicator of flawed reasoning about the character or motivation of others. Though insults are common, and often used in jest, a fundamental axiom of sociology recognizes that derogatory forms of speech make erroneous attributions about the motivation of a person. Scholars classify the erroneous assumptions as the fundamental attribution error.

What qualifies as an insult is also determined both by the individual social situation and by changing social mores. Thus on the one hand the insulting 'obscene invitations of a man to a strange girl can be the spicy endearments of a husband to his wife';[15] on the other hand, the male gaze may be insulting in and of itself to a feminist, whereas a post-feminist might note how 'his eyes took me in...[but] at least he didn't look at me offensively; and believe me, if you're a woman who works in a bar, you can tell the difference between an evaluation and an eye fuck'.[16]