The Intellectual Property Office of the United Kingdom (often The IPO) is, since 2 April 2007, the operating name of The Patent Office.[1] It is the official government body responsible for intellectual property rights in the UK and is an executive agency of the Department for Business, Innovation and Skills (BIS).[2] Some work on copyright policy is shared with the Department of Culture, Media and Sport[citation needed] and plant breeders' rights are administered by the Plant Variety Rights Office, an agency of the Department for Environment, Food and Rural Affairs.[citation needed]

The Intellectual Property Office is led by the Comptroller General of Patents, Designs and Trade Marks, who is also registrar of trade marks,[3] registrar of designs[4] and Chief Executive of the Office. Since 15 February 2010 the Comptroller has been John Alty,[5] following the resignation of Ian Fletcher, who took over after the retirement of Ron Marchant on 30 March 2007.[6] The previous comptroller was Alison Brimelow who was afterwards, between July 2007 and June 2010, President of the European Patent Office.

The existence of the Patent Office and the post of Comptroller are required by the Patents and Designs Act 1907 (though most of the remainder of this Act has been repealed), but the substantive duties of the Office are set out in other legislation, including:

All of the above legislation has been amended extensively since it was first passed.

For more details on this topic, see History of patent law. 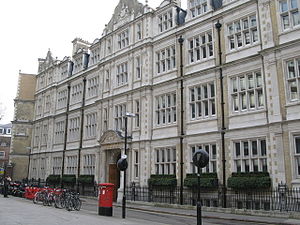 The Patent Office was established by the Patents Law Amendment Act 1852 and opened on 1 October that year. Patents had been awarded prior to this date - indeed Britain has a continuous history of patent regulation dating back at least as far as the fifteenth century; however, by the mid-nineteenth century the process of application had become extremely complicated. This act consolidated patent scrutiny and awards into a single office serving the whole of the United Kingdom (where previously a petitioner had had to apply and pay fees to several offices, and to obtain separate patents for each of the UK's constituent nations).[7]

Initially, people applying for a patent often used to submit a detailed model of their submission; these were retained and the collection became known as the Patent Museum (opened to the public in 1863 in South Kensington, it went on to become a core collection of the new Science Museum there).

From its early days, the Patent Office was based in the Chancery Lane area of London, where it eventually spread to fill the area between Furnival Street and Southampton Buildings. The principal entrance was at 25 Southampton Buildings, where a purpose-built headquarters was constructed in 1899-1902 (architect: Sir John Taylor). The principal interior space was the Library, a "harsh but spectacular space 140ft long, lit from skylights and a clerestory, with two tiers of steel-framed, fireproofed galleries on cast iron Corinthian columns".[8] Designed to allow members of the public to consult patent records, it also contained a very extensive collection of technical and scientific publications, which in 1967 was transferred to the British Library.

In 1991, having outgrown its original premises, the Patent Office moved to Newport, South East Wales, where the IPO headquarters remains to this day. A small branch office in London has been maintained for the benefit of the large professional community based there and for communication with central government.