On 19 July 1940 a new Intelligence Corps was created by Army Order 112 and has existed since that time. The Army had been unprepared for collecting intelligence for deployment to France, and the only intelligence had been collected by Major Sir Gerald Templer. The Corps trained its operatives to parachute at RAF Ringway, who were then dropped over France as part of the Special Operations Executive (SOE). Intelligence Corps officers were involved in forming the highly-effective Long Range Desert Group, and the Corps officer Lt Col Peter Clayton was one of the four founders of the Special Air Service (SAS). Around 40% of British Army personnel at Bletchley Park were in the Intelligence Corps.[4]

The Corps gained its regimental march in 1956, first played at Kneller Hall, the home of the Royal Military School of Music. From August 1957, the Corps first had a permanent cadre of officers; previously all personnel serving in the corps were officers from other parts of the army, on occasional tours. Throughout the Cold War, Intelligence Corps officers and NCOs (with changed insignia) were posted behind the Iron Curtain in East Germany, to join in the intelligence-gathering activities of the British Commanders'-in-Chief Mission to the Soviet Forces in Germany (Brixmis).[5]

Many members of the Intelligence Corps served in Northern Ireland during "the Troubles". Units such as the Military Reaction Force, Special Reconnaissance Unit, Force Research Unit and 14 Intelligence Company contained Corps soldiers and officers.

On 1 February 1985 the corps was officially declared an 'Arm' (combat support) instead of a 'Service' (rear support).[4]

Intelligence Corps personnel wear a distinctive cypress green beret with a cap badge consisting of a union rose (a red rose with a white centre) between two laurel branches and surmounted by a crown. (According to the late Gavin Lyall, the Intelligence Corps cap badge is referred to jokingly as "a rampant pansy resting on its laurels".) Their motto is Manui Dat Cognitio Vires ("Knowledge gives Strength to the Arm"). The corps' quick march is The Rose & Laurel while its slow march is Henry Purcell's Trumpet Tune & Ayre.[6]

Their headquarters, formerly at Maresfield, East Sussex, then Templer Barracks at Ashford, Kent, moved in 1997 to the former Royal Air Force station at Chicksands in Bedfordshire along with the Defence Intelligence and Security Centre and the Intelligence Corps Museum.[6]

The corps has a particularly high proportion of commissioned officers, many of them commissioned from the ranks, and also a high percentage of female members. Non-commissioned personnel join as an Operator Military Intelligence (OPMI) or Operator Military Intelligence (Linguist) (OPMI(L)). They do basic 14-week military training at the Army Training Centre, Pirbright.[7] OPMI will complete a 27-week special-to-arm training at Templer Training Delivery Wing, Chicksands, at the end of which they are promoted to Lance Corporal.[8] 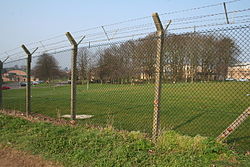