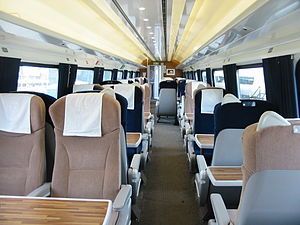 The InterCity 225 is an electric high speed train in the United Kingdom, comprising a Class 91 electric locomotive, nine Mark 4 coaches and a Driving Van Trailer. The Class 91 locomotives were built by BREL at Crewe works as a spin-off from the Advanced Passenger Train project, which was abandoned during the 1980s, whilst the coaches and DVT were constructed by Metro-Cammell in Birmingham and Breda (under sub-contract) in Italy — again borrowing heavily from the Advanced Passenger Train. The trains were designed to operate at up to 140 mph (225 km/h) in regular service, but are limited to 125 mph (200 km/h) due to a lack of cab signalling and the limitations of the current overhead line equipment (OLE). They are used on services from London King's Cross to Leeds, Edinburgh Waverley, Glasgow Central, Skipton, Bradford Forster Square, Newark North Gate, York and Newcastle.

The InterCity 225 has a top service speed of 140 mph (225 km/h); during a test run on Stoke Bank between Peterborough and Grantham an Intercity 225 reached 161.7 mph (260.2 km/h). However, except on High Speed 1, which is equipped with cab signalling, British signalling does not allow trains to exceed 125 mph (201 km/h) in regular service, due to the impracticality of correctly observing lineside signals at high speed.

The Advanced Passenger Train of the early 1980s used a new hydrokinetic braking system to allow it to brake from 155 mph (250 km/h) within existing signalling distances. It is believed[by whom?] that the InterCity 225 project was originally to be called APT-U, but this name was dropped after older APT-P trains were not considered[by whom?] a success and that APT branding would tarnish the reputation of the new High Speed Train.

Between 2001 and April 2006, HSBC Rail (IC225 owner, now Eversholt Rail Group) initiated and funded with support from GNER and Bombardier Transportation and Alstom and others a complete rebuilding and refurbishment programme for both the Class 91 and Mark 4 coaches, called Project Mallard. See British Rail Mark 4 for more details.

Total number of seats is 406 Standard and 129 First which when joined together, give the train a total capacity of 535 Seats.

The finalised £4.5 billion contract for the Intercity Express Programme trains for the Great Western Main Line and East Coast Main Line (ECML) was announced in July 2012.[4] Capital costs for the vehicles are approximately £2.8 million per carriage for bi-mode versions and £2.4 million per carriage for electric versions.[5] Financial closure was reached on the first phase of the contract, valued at £2.4bn, consisting of 21 nine-car electric (Class 801[6]) and 36 five-car bi-mode trains (Class 800[6]), 369 carriages total, for use on Great Western routes.

The trains will enter service in 2017 on the Great Western Main Line and 2018 on the East Coast Main Line.[8]