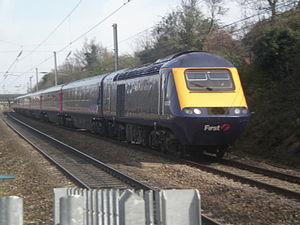 An InterCity 125 passes Ealing Broadway on its way to Swansea. This is the world's fastest diesel train and is used on various intercity services in Great Britain.

There is no precise definition of inter-city rail; its meaning may vary from country to country. Most broadly, it can include any rail services that are neither short-distance commuter rail trains within one city area, nor slow regional rail trains calling at all stations and covering local journeys only. Most typically, an inter-city train is an express train with limited stops and comfortable carriages to serve long-distance travel.

Inter-city rail sometimes provides international services. This is most prevalent in Europe, due to the close proximity of its 50 countries in a 10,180,000 square kilometre (3,930,000 sq mi) area.[citation needed] Eurostar and EuroCity are examples of this. In many European countries the word "InterCity" or "Inter-City" is an official brand name for a network of regular-interval, relatively long-distance train services that meet certain criteria of speed and comfort. This use of the term appeared in the United Kingdom in the 1960s and has been widely imitated.

The speeds of inter-city rail lines are quite diverse, ranging from 50 km/h (31 mph) in a mountainous area or on undeveloped tracks to 200–350 km/h (124–217 mph) on newly constructed or improved tracks. As a result, Inter-city rail may or may not fall into the category of higher-speed rail or high-speed rail. Ideally, the average speed of inter-city rail service would be faster than 100 km/h (62 mph) in order to be competitive with car, bus and other methods of transport.

The distance of an inter-city rail journey is usually at least 50–100 km (31–62 mi), although in many large metropolitan areas commuter and regional services cover equal or longer distances.

A distance of 100–500 km (62–311 mi) is a common journey distance for inter-city rail in many countries. In many cases, railway travel is most competitive at about 2–3 hours journey time. Inter-city rail can often compete with highways and short-haul air travel for journeys of this distance.

In journeys of 500–1,000 km (311–621 mi), the role of inter-city rail is often replaced by faster air travel. Development of high-speed rail in some countries increases the share of railway for such longer-distance journeys. The Paris-Marseille TGV (750 km or 466 mi, or 3 hours) and Tokyo-Aomori Shinkansen (675 km or 419 mi, or 2 hours 59 minutes) are examples of this type of journey. In conventional non high-speed rail, overnight trains are common for this distance.

In some countries with a dense rail network, large territory, or less air and car transport, such as China, India, and Russia, overnight long-distance train services are provided and used practically.

In many other countries, such long-distance rail journey has been replaced by air travel except for tourism or hobbyist purposes, luxury train journeys, or significant cost benefit. Discount Eurail Pass in Europe, Amtrak in the United States, and Indian Pacific in Australia are examples.

Overview of Inter-city rail by country 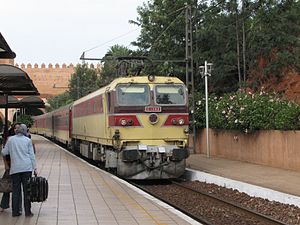 Railways in Africa are still developing or not practically used for passenger purposes in many countries, but the following countries have inter-city services between major cities:

Trains run by China Railways link almost every town and city in the People's Republic of China mainland, including Beijing, Guangzhou, Shanghai, Shenzhen and Xi'an, as well as onwards from Shenzhen across the border to Kowloon, Hong Kong. New high-speed lines from 200–350 km/h (124–217 mph) operation are constructed, and many conventional lines are also upgraded to 200 km/h (124 mph) operation. Currently there are seven High-Speed Inter-City lines in China, with up to 21 planned. They are operated independently from the often parallel High-Speed-Rail-Lines. 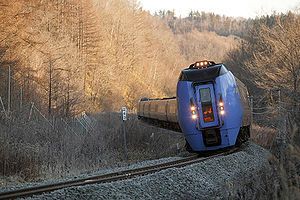 Many other cities are covered by a network of JR's "limited express" inter-city trains on 1,067 mm (3 ft 6 in), narrow gauge, lines. Major cities are covered by convenient train services of every one hour or more frequent. In addition to the JR Group, Japan has several major regional carriers such as the Kintetsu and Nagoya Railroads. 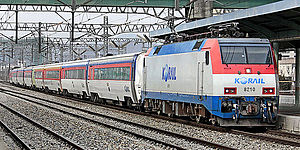 Almost every major town and city in South Korea is linked by railway, run by Korail. Mugunghwa-ho is the most common and most popular type of intercity rail travel. In addition, Seoul and Busan are linked by a high-speed train line known as KTX, which was built using French TGV technology. 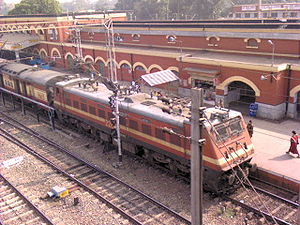 A Rajdhani Express train, one of the fastest Inter-city services in India

Indian inter-city trains are run by Indian Railways. With 63,000 km (39,146 mi) of rail routes and 6,800 stations, the railway network in India is the third-largest in the world (after Russia and China) and the largest in the world in terms of passenger kilometres. Shatabdi Express, Jan Shatabdi Express, Rajdhani Express and Duronto Express are the fastest Inter-city services in India of which the Bhopal Shatabdi Express is the fastest train of India.[citation needed] All long-distance journeys generally require a reservation and unreserved travel is allowed in some trains.

There is only one train service in Cambodia, from Battambang to Phnom Penh, running once a week. 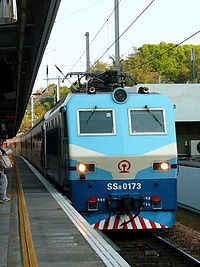 Rail services that connect the towns in the New Territories with the city centres of Kowloon and Hong Kong are provided by the East Rail Line, West Rail Line and Tung Chung Line.

Inter-city railway services crossing the Hong Kong-China border (often known as through trains) are jointly operated by Hong Kong's MTR Corporation Limited and the Ministry of Railways of the People's Republic of China. Currently, Hung Hom Station is the only station in the territory where passengers can catch these cross-border trains. Passengers are required to go through immigration and custom inspections of Hong Kong before boarding a cross-border train or alighting from such a train. There are currently four cross-border train services:

A new border-crossing service, the Guangzhou-Shenzhen-Hong Kong Express Rail Link, has been approved and has been granted HKD 6.6 billion in funding by the Legislative Council's Finance Committee. The line is now under construction. A new station, West Kowloon Terminus, will be built in Hong Kong to be served by this new railway. 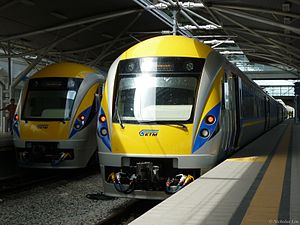 Israel Railways operates inter-city services between all the 4 major metropolitan areas of Israel; Tel Aviv, Jerusalem, Be'er Sheva and Haifa. However, due to the small geography of Israel, most of the railway services have a more suburban service pattern, with many short stops at stations between the major city centres.

In Europe, many long-distance inter-city trains are operated under the InterCity (Intercity, or often simply IC) brand. InterCity (or, initially, "Inter-City" with a hyphen) was first conceived as a brand name by British Rail for the launch in 1966 of its electrification of the major part of the West Coast Main Line, notably new express services between London and the major cities of Manchester, Birmingham and Liverpool. It later became the name of one of British Rail's new business sectors in the 1980s and was used to describe the whole network of main-line passenger routes in Great Britain, but it went out of official use following privatisation. InterCity had become an iconic brand in the 1970s mostly because of the introduction of the British Rail Class 43 (HST).

The principal network of international express trains in continental Europe is called EuroCity, to distinguish it from the national InterCity networks and to indicate its better support for international journeys even though some IC trains also cross borders.

Polskie Koleje Państwowe, a state-owned corporate group, is the main provider of railway services. The PKP group holds an almost unrivaled monopoly over rail services in Poland as it is both supported and partly funded by the national government.

As of 2008, foreign services operate on the Polish Railways network. These include EuroCity and EuroNight trains operating between Western and Eastern European destinations, most notably the EN Jan Kiepura direct sleeping cars which operate between Russia and Amsterdam, Basel and Munich via Warsaw, Poznań and Germany. These trains generally consist of varied coaches from different rail operators that are added to the train as it passes through their area of operation. 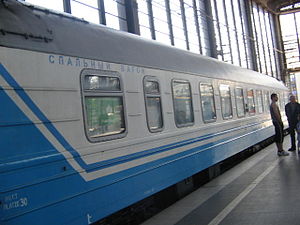 Russia has dense network of long-distance railways all over its vast territory, the longest and most famous being the Trans-Siberian Railway from Moscow to Vladivostok. Long distance train of more than 1,000 or 2,000 km (621 or 1,243 mi) is common and they keep on running two or three days. Speed is relatively low with 60 or 70 km/h (37 or 43 mph) average.

Canadian inter-city trains are mostly run by Via Rail, and connect many but not all major cities. Ontario Northland Railway operates passenger service in Northern Ontario. International trains, run jointly by Amtrak and Via Rail, connect New York with Toronto and Montreal. Amtrak operates the Amtrak Cascades service linking Vancouver and Seattle. The White Pass and Yukon Route links Alaska with the Yukon. 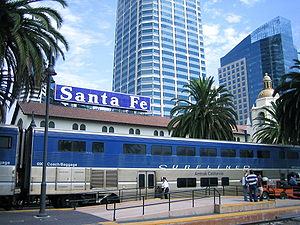 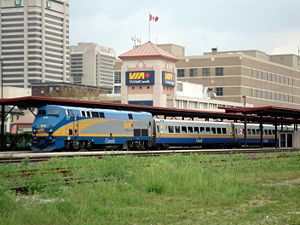 A Via train at London, Ontario station
See also: High-speed rail in the United States

There was a dense system of inter-city railways in the United States in the late 19th and early 20th centuries, but after the decline of passenger railroad in North America in the 1960s, the inter-city lines decreased greatly. Today the system is far less dense and is operated by the government-owned Amtrak company, with the exception of Alaska, which uses the Alaska Railroad. The most heavily used routes with the greatest rider-ship and schedule frequencies are in the Northeastern United States, on Amtrak's Northeast Corridor. About one in every three users of mass transit in the United States and two-thirds of the nation's rail riders live in New York City. The two busiest passenger rail stations in the United States are Penn Station and Grand Central Terminal, both in New York City. Passenger rail outside the Northeast, Northwest, California and Chicago is infrequent and rarely used relative to networks in Europe and Japan.

Multiple new rail corridors have been identified for private development throughout the country. These include the Eastern Flyer route in Oklahoma, the All Aboard Florida route between Miami and Orlando, and a high-speed line in Texas. 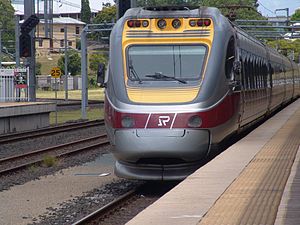 In Australia the national interstate network operated by Great Southern Rail connects all mainland Australian capital cities except Canberra and Brisbane. Intrastate inter-city trains that traverse shorter distances are operated by V/Line, NSW TrainLink, Queensland Rail and Transwa. Many of Australia's inter-city trains are not true inter-city services, given their leisurely average speed and primary role to transport people between regional areas and the nearest capital city or for the tourist market. As a result, Australian networks refer to these services as "country" trains. The fastest intercity trains in regular service are the tilting trains used by Queensland Rail, which have a top speed of 160 km/h and an average of 80 km/h.

On these systems, services either run as limited-stop expresses in the suburban area (e.g. Blue Mountains services) or as shuttles terminating where the suburban lines end (e,g. Rosewood services).

A large-scale non-electric project of four regional lines (Regional Fast Rail) is operational in Victoria. Current interurban and intercity journeys outside the suburban area are often locomotive-hauled (particularly for longer-distance services), due to Victoria's lack of electrification outside of Melbourne.

A few countries of South America were once interconnected by international train services, today they are almost non-existent. Most of governments in the continent have favoured roads and automobile transportation since mid-20th century.

Argentina has inter-city services on a number of routes, run by Ferrobaires, Ferrocentral, and Trenes Especiales Argentinos. Trains in Argentina are experiencing a revival, since the government intends to re-establish long-distance passenger trains between major cities.

Inter-city train services in Bolivia are operated by two train companies: Eastern and Western. The western network runs daily trains from Oruro to Tupiza, with both espresso (fast) and WaraWara (slow) trains. The eastern rail hub is Santa Cruz de la Sierra, with connections to Puerto Suárez and Villamontes, and international lines to Brazil and Argentina.

Brazilian inter-city services operate on two routes, one from Vitória to Belo Horizonte and another from Carajás to São Luís.