After the end of the Second World War, the British authorities in India released all political prisoners who had participated in the Quit India movement. The Indian National Congress, the largest Indian political party, which had long fought for national independence, agreed to participate in elections for a constituent assembly, as did the Muslim League. The newly elected government of Clement Attlee dispatched the 1946 Cabinet Mission to India to formulate proposals for the formation of a government that would lead to an independent India.[4]

The elections for the Constituent Assembly were not direct elections, as the members were elected from each of the provincial legislative assemblies. In the event, the Indian National Congress won a majority of the seats, some 69 per cent, including almost every seat in areas with a majority Hindu electorate. The Congress had clear majorities in eight of the eleven provinces of British India.[5] The Muslim League won the seats allocated to the Muslim electorate.

The Viceroy's Executive Council became the executive branch of the interim government. Originally headed by the Viceroy of India, it was transformed into a council of ministers, with the powers of a prime minister bestowed on the vice-president of the Council, a position held by the Congress leader Jawaharlal Nehru. After independence all members would be Indians, apart from the Viceroy, in August to become the Governor-General, Lord Mountbatten, who would hold only a ceremonial position, and the Commander-in-Chief, India,[4] Sir Claude Auchinleck, replaced after independence by General Sir Rob Lockhart.

Interim Government of India members as of 15 Oct. 1946 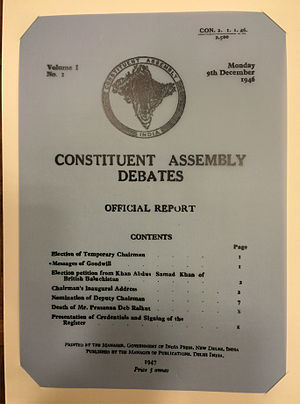 A reproduction of a historical telegram from the Constituent Assembly, which included a message of goodwill from the US government to the assembly.

Although until August 1947 British India remained under the sovereignty of the United Kingdom, the interim government proceeded to establish diplomatic relations with other countries, including the United States.[3] Meanwhile, the Constituent Assembly, from which the Interim Government was drawn, struggled with the challenging task of drafting a constitution for independent India.