The International Bank of Azerbaijan is a global financial institution serving consumers, pensioners, small businesses, multi-national corporations and investors. The bank enjoys a unique position in the history of its nation: the institution has played a key role in bringing the country of Azerbaijan, a “new” country with an ancient heritage and culture, into the 21st century’s global economy.

One hundred years ago, Azerbaijan was a global economic power, producing more than half of the world's oil. Nearly a century of Soviet oppression, ending with the fall of the Soviet Union, damaged the country's economic capacity. Like many former Soviet republics, the country faced an extremely difficult task in securing its own governance and building an economy after gaining independence in 1991.

IBA's beginnings and its growth since that time have been anchored alongside the growth and rebuilding of the country, its administration and a capitalistic economy. The bank is the same age as the current independent country of Azerbaijan (both began in 1992).

After the Soviet Union dissolved, Azerbaijan's society transformed into a free-market, democratic state. Although heavily controlled and 50% owned by the country's government, the bank was able to accomplish what no other large company in Azerbaijan could: expand and connect its people and money to the larger world and partner with some of the most successful, admired, global financial brands: American Express, MasterCard, and Visa.

All this reinforces the International Bank of Azerbaijan’s position as a fiscal foundation and one of the leading economic engines of its country. Additionally, IBA is helping connect the country's people and businesses with those from other nations, including the United States. 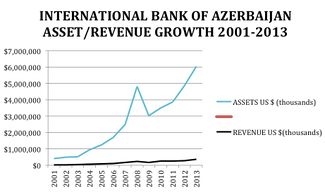 This graph shows the assets and revenue of the International Bank of Azerbaijan between 2001 and 2013.[3]

Note: After Azerbaijan declared its independence from the Soviet Union, in 1992 it introduced a new currency, known as the second manat (AZM) (the first currency was in circulation from 1919 to 1923), valued at around 4,800 per U.S. dollar. On Jan. 1, 2006 the country introduced the 3rd manat (AZN), valued around 0.9 U.S. dollars. This figures in this chart are in shown in U.S. dollars to take into account the change in currency in 2006.[4] 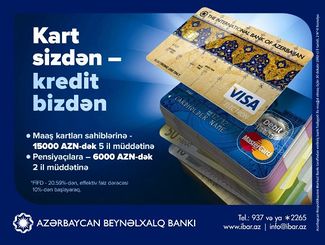 Marketing flier for IBA customer credit cards.. (IBA-bank-cards by internationalbankazerbaijan is licensed under CC BY 2.0) 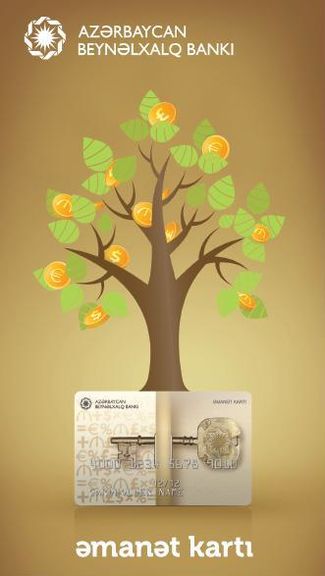 Azerbaijani marketing flier. (IBA-Emanet-karti by internationalbankazerbaijan is licensed under CC BY 2.0)

In 2014, IBA holds the following rankings among banks worldwide:[5]

According to a report issued by the bank on July 1, 2014, IBA's assets increased over 25 percent during 2014 to over AZN 8 billion. Other updated financial figures included:[6]

On May 30, 2013, Moody’s Investors Service announced that it upgraded the bank’s outlook to “Stable” in the following ratings:[11]

The bank's portfolio information for 2012-2013 includes the following:

See the Subsidiaries section above.

The bank holds over 34 percent of the total credit portfolio in Azerbaijan.[18]

The bank began in 1990 as a branch office of Russian bank “Vneshekonombank” (RUS: Внешэкономбанк). In 1992, the office grew into a full joint-stock bank.[17]

The bank began relationships with both Visa and MasterCard in 1997, and the bank began issuing bank cards using those systems.[17]

The few years after 2000 marked a period of growth and international recognition for IBA.

In 2002, the bank accomplished many growth initiatives, including:[17]

In 2009, the bank established an official presence in the United States of America with an office in New York.[17]

In 2010, IBA participated in the United Nations 7th Meeting of the Global Compact Working Group on the 10th Principle against Corruption.[19] 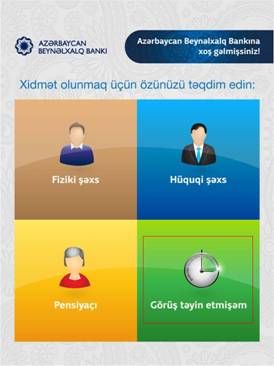 Snapshot of web-based applications, such as Internet appointment scheduling. (IBA-schedule-appointments by internationalbankazerbaijan is licensed under CC BY 2.0)

The bank also offers businesses and their employees a “salary card.” An employer puts money onto the card for an employee’s salary, bonuses, and any other types of pay.[20]

Individual customers can get a MasterCard, Visa and American Express card through the bank.[21] To date, the bank has issued over 2.5 million bank cards to customers.[7]

The bank also provides “micro-loans,” which are loans up to 5,000 manat for customers age 20-65. Individuals can also apply for regular short-term and long-term personal loans.[21]

For retired customers who receive pensions, the bank offers a service called Pension+. The bank gives interest-free loans of 100 manat or more. Repayments for the loan are made automatically when the customer gets their next pension deposit. Additionally, the IBA offers safety deposit boxes.[21]

The bank runs a private banking service for wealthy individuals called “Prestige Club,” a personal banking service aimed at wealthy customers. IBA started the service in 2011.[22] Members of the club get personal assistance with all areas of life, such as business, leisure, travel, home and family.[23]

In 2012, the growth in deposits at IBA-Moscow was mostly due to deposits made by members of the Prestige Club; these deposits accounted for 73 percent of the total growth in customer deposits.[24]

The bank has described Prestit as a personal banking service “designed to organize all processes in all areas of life” such as business, property, inheritance, and travel.[27][28] Some of the services are only available for people who have over $50,000 USD in their account.[29] 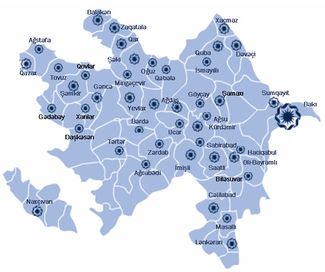 A map of Azerbaijan showing the location of IBA in Baku.. (IBA-map by internationalbankazerbaijan is licensed under CC BY 2.0) 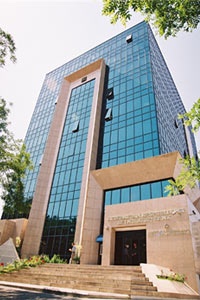 The new world headquarters building. (IBA-HQ by internationalbankazerbaijan is licensed under CC BY 2.0)

The bank is building a new headquarters building that will be commissioned in 2014. The current headquarters is located in the central area of Baku.[30][31] 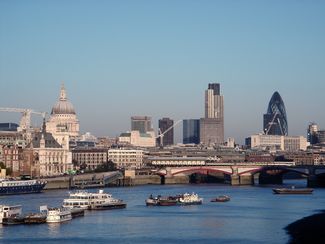 The bank has representative offices and operations in cities around the globe, including London... 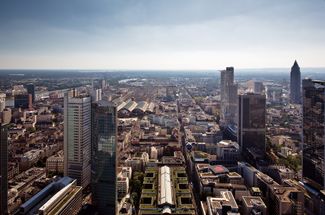 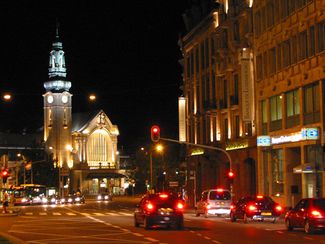 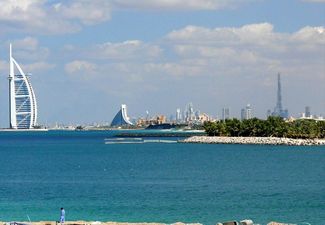 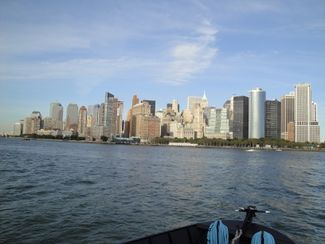 Although the bank offers many programs, the R@ndevu service and "Pension ATM" program have received media attention:

The bank offers customers a service known as “R@ndevu.” The service helps customers get appointments at branches without waiting in line. To do so, customers make appointments online or through the phone.[36]

To run the program, the bank procured a “queue management system” known as eSirius produced by a French company called ESII.[37]

IBA is one of the banks that manages Azerbaijani pensions. In 2013, IBA will roll out new ATMs that people can use to draw out their pensions more easily.[38]

The bank maintains a balanced portfolio of investment companies:

IBA has played a significant financial role with the State Oil Company of Azerbaijan (SOCAR). In 2011, total liabilities of SOCAR to IBA amounted to 680 million manat.[40]

In June 2012, it was reported in the Azeri-Press News Agency that the bank has financed construction of a weaving factory in the United Arab Emirates.[41]

IBA has provided capital financing to AzMeCo, an Azerbaijani methanol production company. In November 2012, AzMeCo signed a contract with BP for the sale, purchase and marketing of methanol produced at the AzMeCo plant in Azerbaijan. The process will begin in 2013.[42]

The cost of the plant construction will be US$360 million.[42]

Gold mining company Anglo-Asian Mining PLC got $30 million from IBA to construct an “agitation leaching plant.” IBA has provided Anglo-Asian Mining with a letter of intent that states the bank may provide up to an additional $42 million. The company will build the plant on the Gadabay gold and copper mine[43]

In May 2008, the bank became the Azerbaijan source for the issuance of Eurobonds and American Express credit cards.[44] In July 2008, the bank received permission from the U.S. Federal Reserve Board to open a representative office in New York City.[45] The bank is expanding internationally. In the first six months of 2012, direct investment into Azerbaijan increased to $2.2 billion, which was a 27 percent increase over the same period a year earlier.[46]

The bank is structured around a boards, committees, departments, branches and sub-branches, representative offices and the bank's chief directors.[47]

As of April 2013, the Accounting and Auditing Organization for Islamic Financial Institutions (AAOIFI) had approved the International Bank of Azerbaijan as a certified Islamic banking institution. IBA is now the only bank in Azerbaijan with the certification by AAOFI.[48]

According to Investopedia, Murabaha is a loan that does not charge interest; instead, an intermediary holds ownership of the property until the buyer pays off the loan.[50]

Azerbaijan's importance in the market

In October 2012, Azer News reported that Azerbaijan is becoming a regional center for Islamic financing. According to the article, "Islamic financing is one of the fastest-growing segments of the global financial services industry worldwide. The International Bank of Azerbaijan (IBA), the country’s leading bank, has recently established an Islamic banking department..."[51]

The IBA would use proceeds from the entity to finance its line of Shariah-compliant loans.[49]

In 2013, IBA created a credit and debit card geared toward Islamic customers. The card, known as Qibla, has a digital compass that points to Mecca.[52]

The bank owns several subsidiaries which include direct subsidiary banks of IBA and non-banking sector companies. 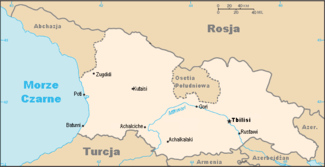 A map of the country of Georgia

International Bank of Azerbaijan-Georgia ("IBA-Georgia")is a subsidiary bank of IBA in Tbilisi, Georgia, founded in 2007.[53] The bank offers depository and commercial banking. Services include currency exchange, money transfer, deposits, and credit.[54] Between July 2013 and 2014, IBA-Georgia's net profit and total capital increased by 145 percent and 15 percent, respectively.[55]

IBA-Georgia is a member of the Tbilisi Interbank Stock Exchange, Association of Banks of Georgia, and the Banking Association for Central and Eastern Europe.

IBA-Moscow is a subsidiary bank of the IBA in Moscow, Russia, that was started in 2002. The primary purpose is to deepen trade and economic ties between Russia and Azerbaijan and to provide services to Azerbaijani citizens who live in Russia. The bank is located at 125009, Moscow, ul. Tverskaya, 6, str. 2.[56]

The bank is implementing a new ATM management system. Naumen Service Desk, which is a subsidiary of Naumen Company, is developing the system for IBA. Naumen is a software developer based in Russia.[57] IBA and Naumen are leading Azerbaijan toward implementation of virtualization technology across multiple industries.[58]

The bank has received awards and recognition from organizations around the world. Some of these include the following:

IBA was named the Best Bank in Azerbaijan by Global Finance magazine[lower-alpha 1] in 2012 and 2014. The criteria for winning included assets growth, profitability, strategic development, customer service, competitive advantages and innovative products. Global Finance describes the rankings: "The winners are not always the biggest banks but rather the best—those with the qualities that corporations should look for when choosing a bank. These are banks with effective risk management systems, quality service and best practices in corporate governance."[59][60]

In May 2013, the bank was named “Best Local Bank” by EMEA Finance magazine. Each year, EMEA Finance gives “best bank” awards to banks in more than 20 different categories.[61]

In 2012, IBA was ranked number 38 in "Top 200 Banks in Eurasia" by Business New Europe magazine. IBA is the only bank from Azerbaijan included on the list.[63]

In 2012, Global Finance magazine named IBA as one of the World’s Best Emerging Market Banks in Asia.[64] 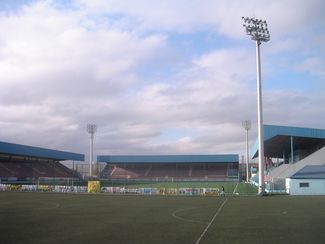 In 2012, IBA began sponsoring an annual youth soccer tournament each summer. In 2013, the tournament will be held at Shafa Stadium from June 17–22. In 2012, 130 children from youth teams of professional soccer clubs in 8 countries attended. The countries were Azerbaijan, Turkey, Georgia, Sweden, Russia, Bulgaria, Ukraine and Estonia.[65]

The bank runs a promotion with Visa, Inc. called “'Pay by card Visa abroad and win a prize!” The bank gives prizes such as iPhones to customers who use their credit card outside of Azerbaijan.[66] In 2013, the bank partnered with Azercell and Visa for a joint promotion. The promotion gave free cell phone minutes to customers if they pay their cell phone bill with an IBA Visa debit card.[67]

IBA is a member of the following professional organizations and systems:[68]

Some prominent businesses and organizations that have partnered with IBA include the following:

In 2013, IBA and the Microsoft Corporation signed a long-term enterprise agreement. The agreement allows IBA to use Microsoft software on its computer systems.[73]