The International Civil Aviation Organization (ICAO, pronounced /aɪˈkeɪ.oʊ/; French: Organisation de l'aviation civile internationale, OACI), is a specialized agency of the United Nations. It codifies the principles and techniques of international air navigation and fosters the planning and development of international air transport to ensure safe and orderly growth.[2] Its headquarters are located in the Quartier International of Montreal, Canada.

The Air Navigation Commission (ANC) is the technical body within ICAO. The Commission is composed of 19 Commissioners, nominated by the ICAO's contracting states, and appointed by the ICAO Council.[3] Commissioners serve as independent experts, who although nominated by their states, do not serve as state or political representatives. The development of Aviation Standards and Recommended Practices is done under the direction of the ANC through the formal process of ICAO Panels. Once approved by the Commission, standards are sent to the Council, the political body of ICAO, for consultation and coordination with the Member States before final adoption.

ICAO is distinct from the International Air Transport Association (IATA), a trade association representing 240 of the world’s airlines, also headquartered in Montreal, or with the Civil Air Navigation Services Organisation (CANSO), an organization for Air Navigation Service Providers (ANSPs) with its headquarters at Amsterdam Airport Schiphol in the Netherlands. These are trade associations representing specific aviation interests, whereas ICAO is a body of the United Nations.

The forerunner to ICAO was the International Commission for Air Navigation (ICAN).[2] It held its first convention in 1903 in Berlin, Germany but no agreements were reached among the eight countries that attended. At the second convention in 1906, also held in Berlin, 27 countries attended. The third convention, held in London in 1912 allocated the first radio callsigns for use by aircraft. ICAN continued to operate until 1945.[4][5]

Fifty-two countries signed the Convention on International Civil Aviation, also known as the Chicago Convention, in Chicago, Illinois, on 7 December 1944. Under its terms, a Provisional International Civil Aviation Organization (PICAO) was to be established, to be replaced in turn by a permanent organization when 26 countries ratified the convention. Accordingly, PICAO began operating on 6 June 1945, replacing ICAN. The 26th country ratified the Convention on 5 March 1947 and, consequently PICAO was disestablished on 4 April 1947 and replaced by ICAO, which began operations the same day. In October 1947, ICAO became an agency of the United Nations linked to the United Nations Economic and Social Council (ECOSOC).[1][4]

In April 2013, Qatar offered to serve as the new permanent seat of the Organization. Qatar promised to construct a massive new headquarters for ICAO and cover all moving expenses, stating that Montreal "was too far from Europe and Asia", "had cold winters," was hard to attend due to the refusal of the Canadian government to provide visas in a timely manner, and that the taxes imposed on ICAO by Canada were too high.[6] According to the Globe and Mail, Qatar's move was at least partly motivated by the pro-Israel foreign policy of Canadian Prime Minister Stephen Harper.[7][8] Approximately one month later, Qatar withdrew its bid after a separate proposal to the ICAO's governing council to move the ICAO triennial conference to Doha was defeated by a vote of 22–14.[9][10][11]

Liechtenstein has delegated Switzerland to implement the treaty to make it applicable in the territory of Liechtenstein.[15]

The Council of ICAO is elected by the Assembly every 3 years and consists of 36 members elected in 3 categories. The present Council was elected on 1 October 2013 at the 38th Assembly of ICAO at Montreal.[16] The Structure of present Council is as follows:

PART I – (States of chief importance in air transport) – Australia, Brazil, Canada, China, France, Germany, Italy, Japan, Russian Federation, United Kingdom and the United States. All of them have been re-elected.[16]

PART II – (States which make the largest contribution to the provision of facilities for international civil air navigation) – Argentina, Egypt, India, Mexico, Nigeria, Norway, Portugal, Saudi Arabia, Singapore, South Africa, Spain and Venezuela. Except Norway, Portugal and Venezuela, all others have been re-elected.[16]

ICAO also standardizes certain functions for use in the airline industry, such as the Aeronautical Message Handling System (AMHS). This makes it a standards organization.

Each country should have an accessible Aeronautical Information Publication (AIP), based on standards defined by ICAO, containing information essential to air navigation. Countries are required to update their AIP manuals every 28 days and so provide definitive regulations, procedures and information for each country about airspace and airports. ICAO's standards also dictate that temporary hazards to aircraft are regularly published using NOTAMs.

ICAO defines an International Standard Atmosphere (also known as ICAO Standard Atmosphere), a model of the standard variation of pressure, temperature, density, and viscosity with altitude in the Earth's atmosphere. This is useful in calibrating instruments and designing aircraft.[17]

ICAO standardizes machine-readable passports worldwide.[18] Such passports have an area where some of the information otherwise written in textual form is written as strings of alphanumeric characters, printed in a manner suitable for optical character recognition. This enables border controllers and other law enforcement agents to process such passports quickly, without having to input the information manually into a computer. ICAO publishes Doc 9303 Machine Readable Travel Documents, the technical standard for machine-readable passports.[19] A more recent standard is for biometric passports. These contain biometrics to authenticate the identity of travellers. The passport's critical information is stored on a tiny RFID computer chip, much like information stored on smartcards. Like some smartcards, the passport book design calls for an embedded contactless chip that is able to hold digital signature data to ensure the integrity of the passport and the biometric data.

Both ICAO and IATA have their own airport and airline code systems. ICAO uses 4-letter airport codes (vs. IATA's 3-letter codes). The ICAO code is based on the region and country of the airport—for example, Charles de Gaulle Airport has an ICAO code of LFPG, where L indicates Southern Europe, F, France, PG, Paris de Gaulle, while Orly Airport has the code LFPO (the 3rd letter sometimes refers to the particular flight information region (FIR) or the last two may be arbitrary). In most of the world, ICAO and IATA codes are unrelated; for example, Charles de Gaulle Airport has an IATA code of CDG and Orly, ORY. However, the location prefix for continental United States is K and ICAO codes are usually the IATA code with this prefix. For example, the ICAO code for Los Angeles International Airport is KLAX. Canada follows a similar pattern, where a prefix of C is usually added to an IATA code to create the ICAO code. For example, Edmonton International Airport is YEG or CYEG. (In contrast, airports in Hawaii are in the Pacific region and so have ICAO codes that start with PH; Kona International Airport's code is PHKO.) Note that not all airports are assigned codes in both systems; for example, airports that do not have airline service do not need an IATA code.

ICAO also assigns 3-letter airline codes (versus the more-familiar 2-letter IATA codes—for example, UAL vs. UA for United Airlines). ICAO also provides telephony designators to aircraft operators worldwide, a one- or two-word designator used on the radio, usually, but not always, similar to the aircraft operator name. For example, the identifier for Japan Airlines International is JAL and the designator is Japan Air, but Aer Lingus is EIN and Shamrock. Thus, a Japan Airlines flight numbered 111 would be written as "JAL111" and pronounced "Japan Air One One One" on the radio, while a similarly numbered Aer Lingus would be written as "EIN111" and pronounced "Shamrock One One One". In the US, FAA practices[21] require the digits of the flight number to be spoken in group format ("Japan Air One Eleven" in the above example) while individual digits are used for the aircraft tail number used for unscheduled civil flights.

ICAO maintains the standards for aircraft registration ("tail numbers"), including the alphanumeric codes that identify the country of registration. For example, airplanes registered in the United States have tail numbers starting with N.

ICAO is also responsible for issuing alphanumeric aircraft type codes containing two to four characters. These codes provide the identification that is typically used in flight plans. The Boeing 747 would use B741, B742, B743, etc., depending on the particular variant. 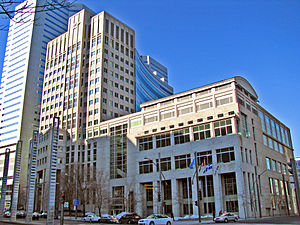 ICAO has a headquarters, seven regional offices, and one regional sub-office :[22]

Emissions from international aviation are specifically excluded from the targets agreed under the Kyoto Protocol. Instead, the Protocol invites developed countries to pursue the limitation or reduction of emissions through the International Civil Aviation Organization. ICAO's environmental committee continues to consider the potential for using market-based measures such as trading and charging, but this work is unlikely to lead to global action. It is currently developing guidance for states who wish to include aviation in an emissions trading scheme (ETS) to meet their Kyoto commitments, and for airlines who wish to participate voluntarily in a trading scheme.

Emissions from domestic aviation are included within the Kyoto targets agreed by countries. This has led to some national policies such as fuel and emission taxes for domestic air travel in the Netherlands and Norway, respectively. Although some countries tax the fuel used by domestic aviation, there is no duty on kerosene used on international flights.[24]

ICAO is currently opposed to the inclusion of aviation in the European Union Emission Trading Scheme (EU ETS). The EU, however, is pressing ahead with its plans to include aviation.