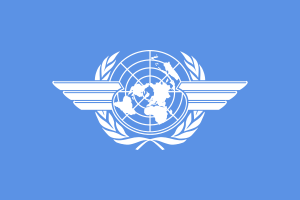 Flag of the ICAO

The ICAO (/ˌaɪˌkeɪˈoʊ/, eye-KAY-oh) airport code or location indicator is a four-character alphanumeric code designating aerodromes around the world. These codes are defined by the International Civil Aviation Organization, and published in ICAO Document 7910: Location Indicators are used by air traffic control and airline operations such as flight planning. They differ from IATA codes, which are generally used for airline timetables, reservations, and baggage tags. For example, the IATA code for London's Heathrow Airport is LHR and its ICAO code is EGLL. ICAO codes are commonly seen by passengers and the general public on flight-tracking services such as FlightAware. In general IATA codes are usually derived from the name of the airport or the city it serves, while ICAO codes are distributed by region and country.

ICAO codes are also used to identify other aviation facilities such as weather stations, International Flight Service Stations or Area Control Centers, whether or not they are located at airports.

The International Civil Aviation Organization was formed in 1947 under the auspices of the United Nations, and it established Flight Information Regions (FIRs) for controlling air traffic and making airport identification simple and clear.

Most of the rest of the world could be classified in a more planned top-down manner, as they didn't have as much established aviation legacy. Thus Uxxx referred to the Soviet Union with the second letter denoting the specific region within it, and so forth. Europe had too many locations for only one starting letter, so it was split into Exxx for northern Europe and Lxxx for southern Europe. The second letter drilled down: EGxx was the United Kingdom (G for Great Britain), EDxx was West Germany (D for Deutschland), ETxx was East Germany (the ETxx code was reassigned to military fields after the reunification), LExx was Spain (E for España), LAxx was Albania, and so on. France was designated LFxx, as the counterpart EFxx was the unambiguously northern Finland. (originally OFxx, as the more rigid geographical structure evolved over time; in the beginning, countries usually had "blocks" of codes; for example, Finland still has the country identifier OH- in its aircraft registrations). 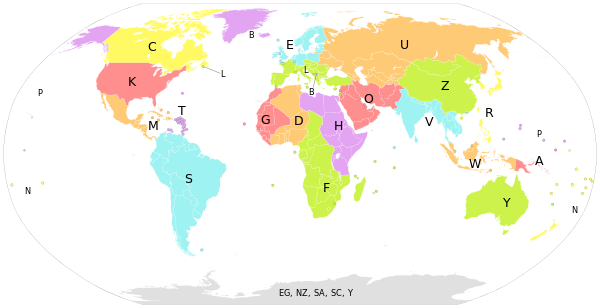 Map of world regions classified according to the first letter of the ICAO airport code.

Map of countries classified according to the ICAO airport code prefix. Any correspondence between subnational regions and second letter also indicated. Micronations not labeled individually.

Unlike the IATA codes, the ICAO codes generally have a regional structure, are not duplicated, and are comprehensive. In general, the first letter is allocated by continent and represents a country or group of countries within that continent. The second letter generally represents a country within that region, and the remaining two are used to identify each airport. The exception to this rule is larger countries that have single-letter country codes, where the remaining three letters identify the airport. In either case, ICAO codes generally provide geographical context unlike IATA codes. For example, if one knows that the ICAO code for Heathrow is EGLL, then one can deduce that the airport EGGP is somewhere in the UK (it is Liverpool John Lennon Airport). On the other hand, knowing that the IATA code for Heathrow is LHR does not enable one to deduce the location of the airport LHV with any greater certainty (it is William T. Piper Memorial Airport in Lock Haven, Pennsylvania in the United States).

There are a few exceptions to the regional structure of the ICAO code made for political or administrative reasons. For example, the RAF Mount Pleasant air base in the Falkland Islands is assigned the ICAO code EGYP as though it were in the United Kingdom, but a nearby civilian airport such as Port Stanley Airport is assigned SFAL, consistent with South America. Similarly Saint Pierre and Miquelon is controlled by France, and airports there are assigned LFxx as though they were in Europe. Further, in region L (Southern Europe), all available 2-letter prefixes have been exhausted and thus no additional countries can be added. Thus when Kosovo declared independence, there was no space in the Lxxx codes to accommodate it, so airports in Kosovo were assigned BKxx, grouping Kosovo with Greenland and Iceland.[citation needed]

The letters I, J and X are not currently used as the first letter of any ICAO identifier. In Russia and CIS, Latin letter X (or its Morse/Baudot Cyrillic equivalent Ь) is used to designate government, military and experimental aviation airfields in internal airfield codes similar in structure and purpose to ICAO codes but not used internationally.[1] Q is reserved for international radiocommunications and other non-geographical special uses (see Q code).

In the contiguous United States, Canada and some airports in Mexico, most, but not all, airports have been assigned three-letter IATA codes. These are the same as their ICAO code, but without the leading K, C, or M.; e.g., YEG and CYEG both refer to Edmonton International Airport, Edmonton, Alberta; IAD and KIAD are used for Washington Dulles International Airport, Chantilly, Virginia. These codes are not to be confused with radio or television call signs, even though both countries use four-letter call signs starting with those letters. However, because Alaska, Hawaii, and United States territories have their own 2-letter ICAO prefix, the situation there is similar to other smaller countries and the ICAO code of their airports is typically different from its corresponding 3-letter FAA/IATA identifier. For example, Hilo International Airport (PHTO vs ITO) and Juneau International Airport (PAJN vs JNU).[citation needed]

ZZZZ is a special code which is used when no ICAO code exists for the airport and is normally used in flight plans.[citation needed]

A list of airports, sorted by ICAO code, is available below.

In small countries like Belgium or the Netherlands, almost all aerodromes have an ICAO code. For bigger countries like the UK or Germany this is not feasible, given the limited number of letter codes. Some countries have addressed this issue by introducing a scheme of sub-ICAO aerodrome codes; France, for example, assigns pseudo-ICAO codes in the style LFddnn, where dd indicates the département while nn is a sequential counter. In the case of France, an amateur organisation, the FFPLUM, was formally named the keeper of these codes.[2]