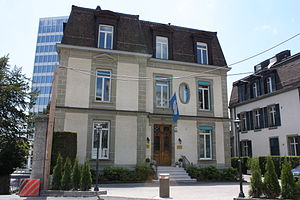 The Fédération Internationale de Gymnastique (FIG) or International Federation of Gymnastics (IFG) is the governing body of competitive gymnastics. Its headquarters is in Lausanne, Switzerland. It was founded on July 23, 1881 in Liège, Belgium, making it the worlds oldest existing international sport organisation.[1] Originally called the European Federation of Gymnastics, it had three member countries – Belgium, France and the Netherlands – until 1921, when non-European countries were admitted, and it was renamed to its current name.[2]

Additionally, the federation has been considered the authority responsible for determining whether gymnasts are old enough to participate in the Olympics.

The main governing bodies of the federation are the President and Vice-Presidents, the Congress, held every two years, the Executive Committee, the Council and seven Technical Committees – for each of the disciplines (WAG and MAG have distinct ones; for GG it's called General Gymnastics Committee).

As of 2007[update] there are 128 federations affiliated to the FIG and 2 associated federations,[3] as well as four Continental Unions:

An Italian, Bruno Grandi, has been the elected president since 1996.[4]

FIG regulates the age at which gymnasts are allowed to participate in senior-level competitions. The purpose is to protect young gymnasts but it has caused some controversy and there have been cases of age falsification.