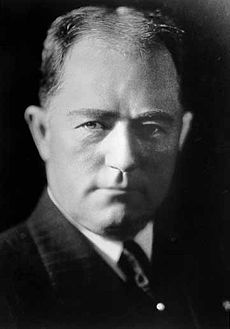 The International Federation of Red Cross and Red Crescent Societies reaches 160 million people each year through its 190-member National Societies.[3] It acts before, during and after disasters and health emergencies to meet the needs and improve the lives of vulnerable people. It does so with impartiality as to nationality, race, gender, religious beliefs, class and political opinions.

Guided by Strategy 2020[4] – the IFRC’s collective plan of action to tackle the major humanitarian and development challenges of this decade – the IFRC is committed to saving lives and changing minds.

The IFRC is part of the International Red Cross and Red Crescent Movement along with the International Committee of the Red Cross (ICRC) and 190 National Societies.[5] The IFRC's strength lies in its volunteer network, community-based expertise and independence and neutrality. It works to improve humanitarian standards, as partners in development and in response to disasters. It persuades decision makers to act in the interests of vulnerable people. It works to enable healthy and safe communities, reduce vulnerabilities, strengthen resilience and foster a culture of peace around the world.

The seven Fundamental Principles that guide the work of the IFRC and its members are: humanity, impartiality, neutrality, independence, voluntary service, unity and universality.

In 1919, representatives from the National Red Cross Societies of Britain, France, Italy, Japan, and the US came together in Paris to found the League of Red Cross Societies (LORCS) whose stated goal was "to strengthen and unite, for health activities, already-existing Red Cross Societies and to promote the creation of new Societies".[6] The original idea was Henry Davison's, then president of the American Red Cross and he was assisted by the British general Sir David Henderson who became the Director-General. This move, led by the American Red Cross, expanded the international activities of the Red Cross Movement beyond the strict mission of the International Committee of the Red Cross (ICRC) to include relief assistance in response to emergencies which were not caused by armed conflict (such as man-made or natural disasters). The American Red Cross already had great disaster relief mission experience extending back to its foundation.

The formation of the League, as an additional international Red Cross organization alongside the ICRC, was not without controversy for a number of reasons. The ICRC had, to some extent, valid concerns about a possible rivalry between the two organizations. The foundation of the League was seen as an attempt to undermine the leadership position of the ICRC within the Movement and to gradually transfer tasks and competencies to a multilateral institution. In addition to that, all founding members of the League were National Societies from countries of the Entente or from associated partners of the Entente. The original statutes of the League from May 1919 contained further regulations which gave the five founding societies a privileged status and, due to the efforts of Henry P. Davison, the right to permanently exclude the National Red Cross Societies from the countries of the Central Powers, namely Germany, Austria, Hungary, Bulgaria and Turkey, and in addition to that the National Red Cross Society of Russia. These rules were contrary to the Red Cross principles of universality and equality among all National Societies, a situation which furthered the concerns of the IFRC.

The first relief assistance mission organized by the League was an aid mission for the victims of a famine and subsequent typhus epidemic in Poland. Only five years after its foundation, the League had already issued 47 donation appeals for missions in 34 countries, an impressive indication of the need for this type of Red Cross work. The total sum raised by these appeals reached 685 million Swiss Francs, which were used to bring emergency supplies to the victims of famines in Russia, Germany, and Albania; earthquakes in Chile, Persia, Japan, Colombia, Ecuador, Costa Rica, and Turkey; and refugee flows in Greece and Turkey. The first large-scale disaster mission of the League came after the 1923 earthquake in Japan which killed about 200,000 people and left countless more wounded and without shelter. Due to the League's coordination, the Red Cross Society of Japan received goods from its sister societies reaching a total value of about $100 million. Another important new field initiated by the League was the creation of youth Red Cross work within the National Societies. 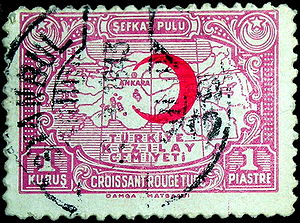 A stamp from Turkey to support the Red Crescent, 1938.

A joint mission of the ICRC and the League in the Russian Civil War from 1917 to 1922 marked the first time the Movement was involved in an internal conflict, although still without an explicit mandate from the Geneva Conventions. The League, with support from more than 25 National Societies, organized assistance missions and the distribution of food and other aid goods for civil populations affected by hunger and disease. The ICRC worked with the Russian Red Cross Society and later the Society of the Soviet Union, constantly emphasizing the ICRC's neutrality. In 1928, the "International Council" was founded to coordinate cooperation between the ICRC and the League, a task which was later taken over by the "Standing Commission". In the same year, a common statute for the Movement was adopted, defining the respective roles of the ICRC and the League within the Movement.

During the Abyssinian War between Ethiopia and Italy from 1935 to 1936, the League contributed aid supplies worth about 1.7 million Swiss Francs. Because the Italian fascist regime under Benito Mussolini refused any cooperation with the Red Cross, these goods were delivered solely to Ethiopia. During the war, an estimated 29 people lost their lives while being under explicit protection of the Red Cross symbol, most of them due to attacks by the Italian Army. During the Civil War in Spain from 1936 to 1939 the League once again joined forces with the ICRC with the support of 41 National Societies. In 1939 on the brink of the Second World War, the League relocated its headquarters from Paris to Geneva to take advantage of Swiss neutrality. 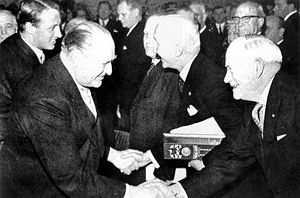 The Federation is honored at the Nobel Peace Prize ceremony in 1963. From left to right: King Olav of Norway, ICRC President Leopold Boissier, and League Chairman John MacAulay.

In the 1960s, there was a marked increase in the number of recognized Red Cross and Red Crescent National Societies due to decolonization. By the end of the 1960s, there were more than 100 societies around the world. On December 10, 1963, the IFRC (still known as the League of Red Cross Societies) and the ICRC jointly received the Nobel Peace Prize.[7]

In 1983, the League was renamed to the "League of Red Cross and Red Crescent Societies" to reflect the growing number of National Societies operating under the Red Crescent symbol. Three years later, the seven fundamental principles of the Movement as adopted in 1965 were incorporated into its statutes. The name of the League was changed again in 1991 to its current official designation the "International Federation of Red Cross and Red Crescent Societies". In 1997, the ICRC and the IFRC signed the Seville Agreement which further defines the responsibilities of both organizations within the Movement.

In 2004, the IFRC began its largest mission to date after the tsunami disaster in South Asia. More than 40 National Societies have worked with more than 22,000 volunteers to bring relief to the countless victims left without food and shelter and endangered by the risk of epidemics.

The stated tasks of the IFRC can be summarized as follows:

The Red Cross Red Crescent is the world’s largest humanitarian network with:

The IFRC has its secretariat in Geneva. It also runs five zone offices and has a number of delegations around the world. The Secretary General is Elhadj As Sy.[8] The IFRC is governed by a Governing Board consisting of a president, four vice-presidents, the chairman of the finance commission and 20 National Society representatives.[9] The highest body of the IFRC is the General Assembly which convenes every two years with delegates from all National Societies. Among other tasks, the General Assembly elects the President. The current president of the IFRC is Tadateru Konoe, who also fulfills the role of president of the Japanese Red Cross).

Presidents of the Federation

Former presidents (until 1977 titled "Chairman") have been:

The IFRC is funded by statutory contributions from National Societies, the delivery of field services to programme partners, and voluntary contributions from donors such as governments, corporations and individuals. The criteria for the statutory contributions of each National Society are established by the Finance Commission and approved by the General Assembly. Additional funding, especially for unforeseen relief assistance missions, is raised by emergency appeals. As of 2005, the Chairman of the Finance Commission is Mr. Chrystold Chetty (Seychelles) and the Vice- Chair is Ms Kathryn Forbes (United States).

The emblem of the IFRC is the combination of a red cross and a red crescent on a white background, surrounded by a red rectangular frame without any additional text. The red cross, the original symbol of the Movement, is on the left while the red crescent appears to the right. Per Humanitatem ad Pacem is the primary motto of the IFRC (Article 1 of the Constitution of the Federation). The mission statement of the IFRC, as formulated in its "Strategy 2010" document is to improve the lives of vulnerable people by mobilizing the power of humanity. From 1999 to 2004, the common slogan for all activities of the International Movement was The Power of Humanity. In December 2003, the 28th International Conference in Geneva adopted the conference motto Protecting Human Dignity as the new slogan for the entire Movement.

Relationships within the Movement 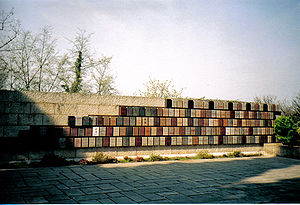 The IFRC has come into conflict with the ICRC at various times, first and foremost when the American Red Cross threatened to supplant the ICRC with its creation of the League as "a real international Red Cross" after the First World War.[11] Several agreements about the respective roles of the organizations helped to smooth relations, beginning with the agreement of 1928, the 1997 Seville Agreement and most recently the Supplementary Measures of 2005. The Seville Agreement gives the IFRC the lead in any emergency which does not take place as part of an armed conflict (in which case the ICRC takes charge). Organizational discord has now largely subsided [12]