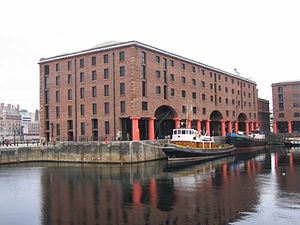 The current block of Albert Dock that houses the museum 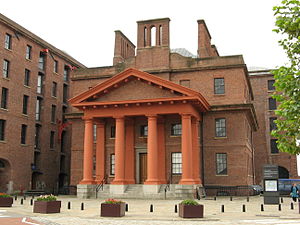 The building in which the museum will be located

The International Slavery Museum in Liverpool, England, is part of the National Museums Liverpool group. Its displays cover untold stories of enslaved people, including historical and contemporary slavery. There is a section about life and culture in West Africa before the transatlantic slave trade, the history of slavery and also displays and special exhibitions about the legacies of slavery and current human rights issues.

The museum is located on the third floor of the building that houses the Merseyside Maritime Museum, with the UK Border Agency National Museum, 'Seized! The Border and Customs uncovered', located in a gallery in the basement.

The new museum opened on 23 August 2007, the date of the annual International Day for the Remembrance of the Slave Trade and its Abolition marking the beginning of the slave uprising in Santo Domingo. The year 2007 was particularly significant as it was the bicentenary of the United Kingdom's Slave Trade Act of 1807, which abolished the slave trade (though not slavery itself) in the U.K.

The Merseyside Maritime Museum used to house a Transatlantic Slavery Gallery. Phase 1 of the International Slavery Museum involved relocating current exhibitions to the third floor of the museum and adding new displays, which doubled the space dedicated to the subject.

New displays incorporate the latest historical research but also cover wider issues of the legacy of transatlantic slavery, and its contemporary relevance. Topics such as freedom and identity, social justice and human rights, underdevelopment in Africa and the Caribbean, racial discrimination and injustice and the transformation of British and other cultures are covered.

The East Gallery features approximately 400 annotated songs pertaining to the experience of slavery and the music of Africa and the slave-descended African diaspora.[1]

National Museums Liverpool say the new gallery focuses on the experience of individuals, using the narratives of enslaved and those involved in the trade. They include a shrine to the ancestors of the enslaved as a quiet area for contemplation and reflection.

The second phase planned is the development of a new visitor-focused resource centre with an events programme of performance, public lectures and debate. The centre will have a research facility for visiting scholars to work and access to National Museums Liverpool's archive collections. A digital archive of material related to the transatlantic slave trade will be available.

To enable phase two of the project National Museums Liverpool has acquired the former Dock Traffic Office, which adjoins the Maritime Museum. The two buildings are to be linked. The Dock Traffic building was formerly occupied by ITV's Granada Television.