World Book Day[1] or World Book and Copyright Day (also known as International Day of the Book or World Book Days) is a yearly event on April 23, organized by the United Nations Educational, Scientific and Cultural Organization (UNESCO), to promote reading, publishing and copyright. In the United Kingdom, the day is recognized on the first Thursday in March. World Book Day was celebrated for the first time on 23 April 1995.

The connection between 23 April and books was first made in 1923 by booksellers in Catalonia, Spain[Book 1] The original idea was the Valencian writer Vicente Clavel Andrés as a way to honor the author Miguel de Cervantes, who died on this date. In 1995 UNESCO decided that the World Book and Copyright Day would be celebrated on 23 April, as the date is also the anniversary of the death of William Shakespeare and Inca Garcilaso de la Vega, as well as that of the birth or death of several other prominent authors.[2] 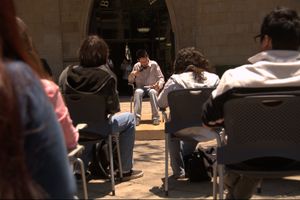 Forum on reading aloud held outside the campus library at the Monterrey Institute of Technology and Higher Education, Mexico City for the occasion

To celebrate this day, Cervantes's Don Quixote is read during a two-day "readathon" and the Miguel de Cervantes Prize is presented by the Spanish king in Alcalá de Henares.

In Catalonia, Spain, St. George's Day has been 'The Day of the Rose' since 1436, and involves the exchange of gifts between loved ones and respected people—it is analogous to Valentine's Day. Although World Book and Copyright Day has been celebrated since 1995 internationally, books were exchanged on 'The Day of the Rose' in Catalonia since 1929, in memory of Cervantes.[3]

In Sweden, the day is known as Världsbokdagen ("World Book Day") and the copyright aspect is seldom mentioned. Normally celebrated on 23 April, it was moved to April 13 in the year 2000[4] and 2011 to avoid a clash with Easter.[5]

In the United Kingdom, World Book Day is held annually on the first Thursday in March, as 23 April clashes with Easter school holidays; 23 April is also the National Saint's Day of England, St George's Day. Conversely, a separate event World Book Night organized by independent charity The Reading Agency is held on 23 April.

In Kensington, Maryland the International Day of the Book is celebrated with a street festival on the Sunday closest to April 23.