The Internet country code top-level domain (ccTLD) for Italy is .it and is sponsored by Consiglio Nazionale delle Ricerche. The .eu domain is also used, as it is shared with other European Union member states.

Currently Internet access is available to businesses and home users in various forms, including dial-up, fiber, cable, DSL, and wireless.

According to netindex.com, the Italian average download and upload speeds are much under the global average (18.4Mbit/s Down/8.2Mbit/s Up at 23 May 2014) With an average speed of 8.5Mbit/s in download and 2.0Mbit/s in upload, the DSL in Italy is among the slowest in the Eurozone (consideration based on the public data available at: http://www.netindex.com/download/2,3/Italy/ - 23 May 2014).

According to data released by the fibre-to-the-home (FTTH) Council Europe, Italy represents one of the largest FTTH markets in Europe, with more than 2.5 million homes passed by fibre at end-December 2010;[1] at the same date the country reported around 348,000 fibre subscribers.[1] The "Fibre for Italy" project (with the participation of providers Fastweb, Vodafone and Wind in a co-investment partnership) aims to reach 20 million people in Italy's 15 largest cities by 2015,[1] and Telecom Italia plans to connect 138 cities by 2018.[1] The government has also started the Italia Digitale project, which aims to provide at least 50% of Italians with high-speed internet access by 2020. The government aims to extend the fibre-optic network to rural areas. 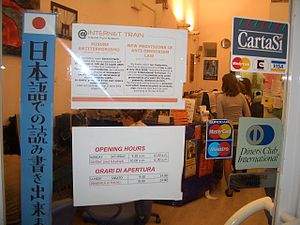 A sign posted on the door of an internet cafe in Florence regarding Italian Law No. 155 of 31 July 2005

An anti-terrorism law amended in 2005, after the terrorists attacks in Madrid and London,[3] by then-Minister of the Interior Giuseppe Pisanu, restricts the opening of new Wi-Fi Hotspots,[4] subjecting interested entities to first apply for permission to open at the Police Headquarters of jurisdiction[4][5] and that Internet users should be subject to identification, by presenting an identity document.[4][5] This has inhibited the opening of hotspots across Italy,[3] with a number of hotspots 5 times lower than France and the conspicuous absence of Municipal wireless networks.[3] Considering the above-mentioned law at too shrink, a proposed law should facilitate the opening and access of Wi-Fi Hotspots,[6] although it is not clear how it should be possible.[6] Only at the end of 2010, a bipartisan bill allowed for the repeal of article 7 of the Pisanu law.[7] The abrogation was finally made by the Monti Cabinet, which has not entered the renewal extension in the decree of 2011, so that the provision is no longer in force since January 1, 2012.[8][9]

Currently internet filtering in Italy is applied on web-sites which display child pornography[10] and on some P2P web-sites (including the most famous The Pirate Bay). A pervasive filtering is applied to those gambling websites who don't have a local license to operate in Italy.[11]