From Infogalactic: the planetary knowledge core
Jump to: navigation, search
For other uses, see Interpolation (disambiguation).

In the mathematical field of numerical analysis, interpolation is a method of constructing new data points within the range of a discrete set of known data points.

In engineering and science, one often has a number of data points, obtained by sampling or experimentation, which represent the values of a function for a limited number of values of the independent variable. It is often required to interpolate (i.e. estimate) the value of that function for an intermediate value of the independent variable. This may be achieved by curve fitting or regression analysis.

A different problem which is closely related to interpolation is the approximation of a complicated function by a simple function. Suppose the formula for some given function is known, but too complex to evaluate efficiently. A few known data points from the original function can be used to create an interpolation based on a simpler function. Of course, when a simple function is used to estimate data points from the original, interpolation errors are usually present; however, depending on the problem domain and the interpolation method used, the gain in simplicity may be of greater value than the resultant loss in precision. 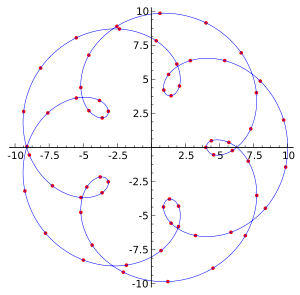 An interpolation of a finite set of points on an epitrochoid. Points through which curve is splined are red; the blue curve connecting them is interpolation.

For example, suppose we have a table like this, which gives some values of an unknown function f. 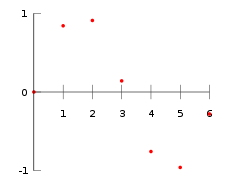 Plot of the data points as given in the table.

Interpolation provides a means of estimating the function at intermediate points, such as x = 2.5.

There are many different interpolation methods, some of which are described below. Some of the concerns to take into account when choosing an appropriate algorithm are: How accurate is the method? How expensive is it? How smooth is the interpolant? How many data points are needed?

For more details on this topic, see Nearest-neighbor interpolation.

The simplest interpolation method is to locate the nearest data value, and assign the same value. In simple problems, this method is unlikely to be used, as linear interpolation (see below) is almost as easy, but in higher-dimensional multivariate interpolation, this could be a favourable choice for its speed and simplicity. 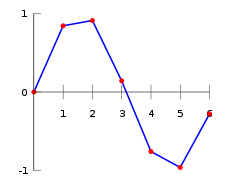 Generally, linear interpolation takes two data points, say (xa,ya) and (xb,yb), and the interpolant is given by:

is the same as the slope of the line between

Linear interpolation is quick and easy, but it is not very precise. Another disadvantage is that the interpolant is not differentiable at the point xk. 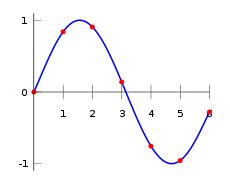 Consider again the problem given above. The following sixth degree polynomial goes through all the seven points:

Polynomial interpolation can estimate local maxima and minima that are outside the range of the samples, unlike linear interpolation. For example, the interpolant above has a local maximum at x ≈ 1.566, f(x) ≈ 1.003 and a local minimum at x ≈ 4.708, f(x) ≈ −1.003. However, these maxima and minima may exceed the theoretical range of the function -- for example, a function that is always positive may have an interpolant with negative values, and whose inverse therefore contains false vertical asymptotes.

More generally, the shape of the resulting curve, especially for very high or low values of the independent variable, may be contrary to commonsense, i.e. to what is known about the experimental system which has generated the data points. These disadvantages can be reduced by using spline interpolation or restricting attention to Chebyshev polynomials. 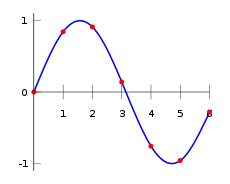 Other forms of interpolation

The Whittaker–Shannon interpolation formula can be used if the number of data points is infinite.

Sometimes, we know not only the value of the function that we want to interpolate, at some points, but also its derivative. This leads to Hermite interpolation problems.

The term extrapolation is used if we want to find data points outside the range of known data points.

In curve fitting problems, the constraint that the interpolant has to go exactly through the data points is relaxed. It is only required to approach the data points as closely as possible (within some other constraints). This requires parameterizing the potential interpolants and having some way of measuring the error. In the simplest case this leads to least squares approximation.

Approximation theory studies how to find the best approximation to a given function by another function from some predetermined class, and how good this approximation is. This clearly yields a bound on how well the interpolant can approximate the unknown function.