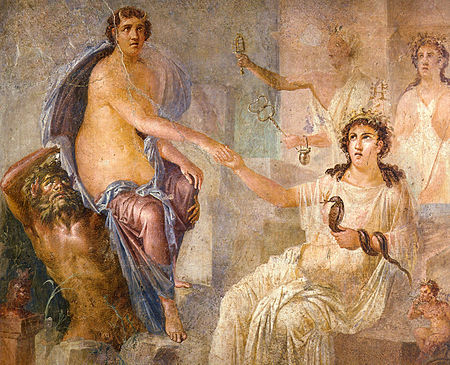 The goddess Isis (seated right) welcoming the Greek heroine Io into Egypt, as depicted in a Roman wall painting from Pompeii

Interpretatio graeca (Latin, "Greek translation" or "interpretation by means of Greek [models]") is a discourse[1] in which ancient Greek religious concepts and practices, deities, and myths are used to interpret or attempt to understand the mythology and religion of other cultures. It is thus a comparative methodology that looks for equivalencies and shared characteristics. The phrase may describe Greek efforts to explain others' beliefs and myths, as when Herodotus describes Egyptian religion in terms of perceived Greek analogues, or when Dionysius of Halicarnassus and Plutarch document Roman cults, temples, and practices under the names of equivalent Greek deities. Interpretatio graeca may also describe non-Greeks' interpretation of their own belief systems by comparison or assimilation with Greek models, as when Romans adapt Greek myths and iconography under the names of their own gods.

Interpretatio romana is comparative discourse in reference to ancient Roman religion and myth, as in the formation of a distinctive Gallo-Roman religion. Both the Romans and the Gauls reinterpreted Gallic religious traditions in relation to Roman models, particularly Imperial cult.

Jan Assmann considers the polytheistic approach to internationalizing gods as a form of "intercultural translation":

The great achievement of polytheism is the articulation of a common semantic universe. …The meaning of a deity is his or her specific character as it unfolded in myths, hymns, rites, and so on. This character makes a deity comparable to other deities with similar traits. The similarity of gods makes their names mutually translatable. … The practice of translating the names of the gods created a concept of similarity and produced the idea or conviction that the gods are international.[2]

Pliny the Elder expressed the "translatability" of deities as "different names to different peoples" (nomina alia aliis gentibus).[3] This capacity made possible the religious syncretism of the Hellenistic era and the pre-Christian Roman Empire.

Herodotus was one of the earliest authors to engage in this form of interpretation. In his observations regarding the Egyptians, he establishes Greco-Egyptian equivalents that endured into the Hellenistic era, including Amon/Zeus, Osiris/Dionysus, and Ptah/Hephaestus.

Some pairs of Greek and Roman gods, such as Zeus and Jupiter, are thought to derive from a common Indo-European archetype (Dyeus as the supreme sky god), and thus exhibit shared functions by nature. Others required more expansive theological and poetic efforts: though both Ares and Mars are war gods, Ares was a relatively minor figure in Greek religious practice and deprecated by the poets, while Mars was a father of the Roman people and a central figure of archaic Roman religion.

Some deities dating to Rome's oldest religious stratum, such as Janus and Terminus, had no Greek equivalent. Other Greek divine figures, most notably Apollo, were adopted directly into Roman culture, but underwent a distinctly Roman development, as when Augustus made Apollo one of his patron deities. In the early period, Etruscan culture played an intermediary role in transmitting Greek myth and religion to the Romans, as evidenced in the linguistic transformation of Greek Heracles to Etruscan Her[e]cle to Roman Hercules.

The phrase interpretatio romana was first used by the Imperial-era historian Tacitus in the Germania.[4] Tacitus reports that in a sacred grove of the Nahanarvali, "a priest adorned as a woman presides, but they commemorate gods who in Roman terms (interpretatione romana) are Castor and Pollux."[5] Elsewhere,[6] he identifies the principal god of the Germans as Mercury, perhaps referring to Wotan.[7] 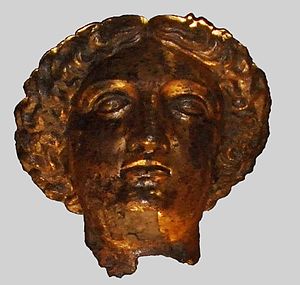 Some information about the deities of the ancient Gauls (the continental Celts), who left no written literature other than inscriptions, is preserved by Greco-Roman sources under the names of Greek and Latin equivalents. A large number of Gaulish theonyms or cult titles are preserved, for instance, in association with Mars. As with some Greek and Roman divine counterparts, the perceived similarities between a Gallic and a Roman or Greek deity may reflect a common Indo-European origin.[8] Lugh was identified with Mercury, Nodens with Mars as healer and protector, Sulis with Minerva. In some cases, however, a Gallic deity is given an interpretatio romana by means of more than one god, varying among literary texts or inscriptions. Since the religions of the Greco-Roman world were not dogmatic, and polytheism lent itself to multiplicity, the concept of "deity" was often expansive, permitting multiple and even contradictory functions within a single divinity, and overlapping powers and functions among the diverse figures of each pantheon. These tendencies extended to cross-cultural identifications.[9]

In the Eastern empire, the Anatolian storm god with his double-headed axe became Jupiter Dolichenus, a favorite cult figure among soldiers. Roman scholars such as Varro interpreted the monotheistic god of the Jews into Roman terms as Caelus or Jupiter Optimus Maximus. Some Greco-Roman authors seem to have understood the Jewish invocation of Yahweh Sabaoth as Sabazius.

Interpretatio germanica is the practice by the Germanic peoples of identifying Roman gods with the names of Germanic deities. According to Rudolf Simek, this occurred around the 1st century of the Christian era, when both cultures came into closer contact. Some evidence for interpretatio germanica exists in the Germanic translations of the Roman names for the days of the week:

In most of the Romance languages, which derive from Latin, days of the week still preserve the names of the original Roman deities, such as the Italian for Tuesday, "martedì" (from the Latin "Martis dies"). This is also the case with Saturn in some West Germanic languages; such as the English "Saturday," the West Frisian "Saterdei", the Low German "Saterdag" and the Dutch "zaterdag" all meaning Saturn's day.[1]

Simek emphasizes the paucity of evidence and notes that comparison with Roman gods is insufficient to reconstruct ancient Germanic gods and equate them definitively with those of later Norse mythology.[10]

The following is a list of Greek, Roman, Etruscan, and Egyptian equivalents, based on usage among the ancients themselves, supported by the analyses of modern scholars. "Equivalent" should not be taken to mean "the same god". For instance, when the myths or even cult practices of a particular Roman deity were influenced by the Greek or Etruscan tradition, the deity may have had an independent origin and a tradition that is culturally distinctive.

Examples of deities depicted in syncretic compositions by means of interpretatio graeca or romana: