Interstate 279 (abbreviated I-279) is a north–south Interstate Highway spur that lies entirely within Allegheny County, Pennsylvania. Its southern end is at Interstate 376 at the Fort Pitt Bridge in Pittsburgh, and the north end is in Franklin Park at Interstate 79. It primarily serves at the main access route between Pittsburgh and its northern suburbs. 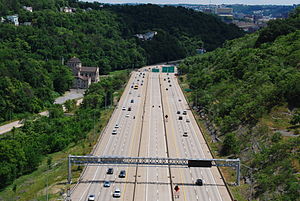 View of I-279 from the Swindell Bridge, roughly two miles north of downtown Pittsburgh.

Interstate 279 is locally referred to as Parkway North. Its southern terminus is at Interstate 376 in downtown Pittsburgh. It runs concurrently with U.S. Route 19 Truck from its southern terminus to exit 4. (US Route 19 Truck continues on Interstate 376 west.) I-279 crosses the Fort Duquesne Bridge over the Allegheny River, providing easy access to Heinz Field and PNC Park. Interstate 579 intersects I-279, but is only accessible by southbound traffic; likewise, traffic from I-579 can only head northbound on I-279 by the Interstate 279 Interchange. I-279 features two reversible high-occupancy vehicle (HOV) lanes. The HOV lanes end at exit 5, which is an interchange with US 19. The road becomes more suburban and rural as it continues to head north. It has two additional interchanges, Bellevue/West View and Camp Horne Road. After Camp Horne Road, there are no exits until its terminus five miles later. The interstate terminates at its parent, Interstate 79. Like the interchange with I-579, this is also a partial interchange. Traffic on I-279 is only permitted to exit northbound on I-79, while only traffic heading southbound on I-79 can exit on to I-279 south.

The section from exit 7A to exit 8B is also known as the North Shore Expressway.[2][3] 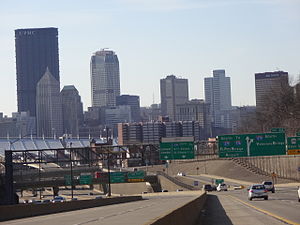 I-279 inbound from the North Hills of Pittsburgh

Interstate 279 was first proposed in 1958, to run along what is now I-79 between the current I-376 in Carnegie and the current I-279 in Franklin Park. In 1972, its route was swapped with I-79, putting I-279 onto its current route, although only the portion in downtown and the Fort Duquesne Bridge were built at the time.[4]

A tragedy occurred on the reversible HOV lanes in 1995 when a negligent highway worker failed to close the outbound gates, leading to a head-on collision that killed six. In 2006, to help prevent a repeat of this incident, automatic "fast acting gates" were activated at the southern entrances to these HOV lanes in downtown Pittsburgh.[8]

During the last phases of construction of I-279 in 1987, a long-forgotten cemetery dating from the 19th century was unearthed near the site of the current I-279/I-579 split. Archaeologists spent four months exhuming the graves for cultural studies at the Smithsonian Institution, significantly putting PennDOT behind schedule to finish construction. It was determined that the graves belonged to Swiss and German immigrants that were members of a local church located next door to the cemetery in what was then Allegheny City, with 727 graves buried at the half-acre (0.20 ha) site between 1833 and 1861. The graves were forgotten about by 1911 when the church did an addition to the building and had the foundation unintentionally go through about fifteen graves, with the churchyard housing the cemetery later becoming a parking lot in 1950. Aside from a pair of stillborn twins, none of the graves were identified, and archaeologists were unable to find any living descendants due to the obscurity of the cemetery. The remains were reburied with one marker at the church's current cemetery in the Troy Hill section of Pittsburgh in 2003 after the Smithsonian Institution finished studying them; the congregation itself disbanded in 1984 after PennDOT bought the church property via eminent domain for I-279 and only had 21 members at that point. Today, it is the largest number of 19th century graves (Native American graves notwithstanding) ever studied archaeologically in America.[9][10]

The entire route is in Allegheny County.