Interstate 80 (I-80) is a transcontinental limited-access highway in the United States that runs from downtown San Francisco, California to Teaneck, New Jersey in the New York City Metropolitan Area. The highway was designated in 1956 as one of the original routes of the Interstate Highway system. Its final segment was opened to traffic in 1986. It is the second-longest Interstate Highway in the United States, following Interstate 90. The Interstate runs through many major cities including Oakland, California, Sacramento, California, Salt Lake City, Utah, Omaha, Nebraska, Des Moines, Iowa and Toledo, Ohio, and passes within 10 miles (16 km) of Chicago, Cleveland, Ohio and New York City.

I-80 is the Interstate highway that most closely approximates the route of the historic Lincoln Highway, the first road across America. The highway roughly traces other historically significant travel routes in the Western United States: the Oregon Trail across Wyoming and Nebraska, the California Trail across most of Nevada and California, the first transcontinental airmail route, and except in the Great Salt Lake area, the entire route of the First Transcontinental Railroad. From near Chicago, Illinois east to near Youngstown, Ohio, Interstate 80 is a toll road, containing the majority of both the Indiana Toll Road and the Ohio Turnpike. I-80 runs concurrent with Interstate 90 from near Portage, Indiana to Elyria, Ohio. In Pennsylvania, I-80 is known as the Keystone Shortway, a non-tolled freeway that crosses rural north-central portions of the state on the way to New Jersey and New York City. 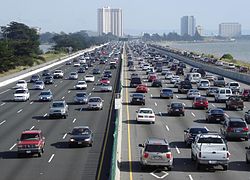 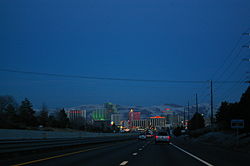 I-80 descending into Reno from the Sierra Nevada 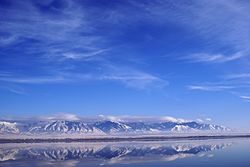 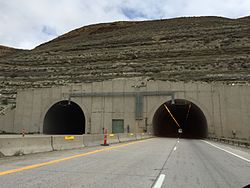 Green River Tunnel in Green River, Wyoming, one of three sets of tunnels along the interstate 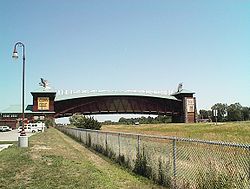 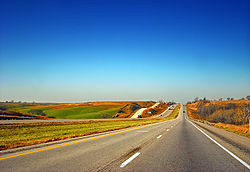 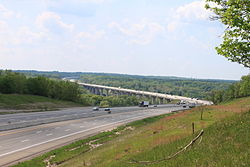 I-80 Ohio Turnpike at the Cuyahoga River 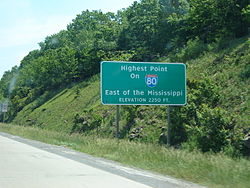 Sign noting the highest point on I-80 east of the Mississippi River located in Clearfield County, Pennsylvania. 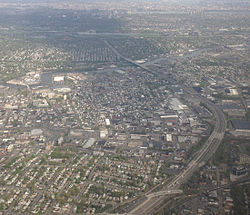 The eastern end of I-80 in Bergen County, New Jersey

Interstate 80 begins at an interchange with U.S. Route 101 in San Francisco, and then crosses the San Francisco-Oakland Bay Bridge into Oakland. It then heads northeast through Vallejo, Sacramento, and the Sierra Nevada mountains before crossing into Nevada.

A portion of the route through Pinole, California involved the experimental transplantation of the rare species Santa Cruz tarweed in the right-of-way.

In Nevada, I-80 traverses the northern portion of the state. The freeway serves the Reno–Sparks metropolitan area, and it also goes through the towns of Fernley, Lovelock, Winnemucca, Battle Mountain, Elko, Wells, and West Wendover on its way through the state.

The Nevada portion of I-80 follows the paths of the Truckee and Humboldt Rivers, which have been used as a transportation corridor since the California Gold Rush of the 1840s. The interstate also follows the historical routes of the California Trail, First Transcontinental Railroad, and Feather River Route throughout portions of the state. I-80 in Nevada closely follows, and at many points directly overlaps, the original route of the Victory Highway, State Route 1, and U.S. Route 40.

After crossing Utah's western border in Wendover, I-80 crosses the desolate Bonneville Salt Flats west of the Great Salt Lake. The longest stretch between exits on an Interstate Highway is located between Wendover and Knolls, with 37 miles (60 km) between those exits. This portion of I-80, crossing the Great Salt Lake Desert, is extremely flat and straight, dotted with large warning signs about driver fatigue and drowsiness.

East of the salt flats, I-80 passes the southern edge of Great Salt Lake and continues on through Salt Lake City, where it merges with I-15 for 3 miles (4.8 km) before entering the Wasatch Mountains east of the city. It ascends Parley's Canyon and passes within a few miles of Park City as it follows a route through the mountains towards the junction with the eastern terminus of the western section of I-84. From the junction it continues up Echo Canyon and on towards the border with Wyoming, near Evanston.

In Wyoming, I-80 reaches its maximum elevation of 8,640 feet (2,633 m) above sea level[3] at Sherman Summit, near Buford, which at 8,000 feet is the highest community on I-80. Farther west in Wyoming, the interstate passes through the dry Red Desert and over the Continental Divide. In a way, the highway crosses the Divide twice, since two ridges of the Rocky Mountains split in Wyoming, forming the Great Divide Basin, from which surface water cannot drain, but can only evaporate.

I-80 enters Nebraska west of Bushnell. The western portion of I-80 in Nebraska runs very close to the state of Colorado, without entering the state. The intersection of Interstate 76 and I-80 is visible from the Colorado-Nebraska state line. From its intersection with I-76 to Grand Island, I-80 lies in the valley of the South Platte River and the Platte River.

The longest straight stretch of interstate anywhere in the Interstate Highway System is the approximately 72 miles (116 km) of I-80 occurring between Exit 318 in the Grand Island area and mile marker 390 near Lincoln, Nebraska. Along this length, the road does not vary from an ideally straight line by more than a few yards. After Lincoln, I-80 turns northeast towards Omaha. It then crosses the Missouri River in Omaha to enter the State of Iowa. Part of Interstate 80 in Nebraska is marked as a Blue Star Memorial Highway.

Interstate 80 is the longest Interstate Highway in Iowa. It extends from west to east across the central portion of the state through the population centers of Council Bluffs, Des Moines and the Quad Cities.[4] It enters the state at the Missouri River in Council Bluffs and heads east through the southern Iowa drift plain. In the Des Moines area, I-80 meets up with I-35 and the two routes bypass Des Moines together. In Ankeny, the interstates split and I-80 continues east. In eastern Iowa, it provides access to the University of Iowa in Iowa City. Northwest of the Quad Cities in Walcott is Iowa 80, the World's Largest Truckstop. I-80 passes along the northern edge of Davenport and Bettendorf and leaves Iowa via the Fred Schwengel Memorial Bridge over the Mississippi River into Illinois. The majority of the highway runs through farmland,[4] yet roughly one-third of Iowa's population live along the I-80 corridor.[5]

In Illinois, I-80 runs from the Fred Schwengel Memorial Bridge across the Mississippi River south to an intersection with I-74. It then runs east across north-central Illinois just north of the Illinois River to Joliet. I-80 continues east and joins I-94 just before entering Indiana.

In Indiana, I-80 runs concurrent with another Interstate Highway for its entire length. It runs with I-94 on the Borman Expressway before joining I-90 to Ohio on the Indiana Toll Road.

The portion of I-80 between Lake Station, Indiana and Elyria, Ohio runs concurrent with I-90. Between LaPorte and the Greater Toledo, Ohio area, the two highways are located within ten miles (16 km) of the Michigan state line, but do not enter that state. From the State Route 9 and I-80/I-90 intersection, the sign marking the Indiana-Michigan state line is visible. I-80/I-90 passes through the South Bend metropolitan area intersecting with the St. Joseph Valley Freeway. At another point in northern Indiana, I-80/I-90 comes within about 200 yards (180 m) from the Michigan border.[6]

In Ohio, I-80 enters with I-90 from the Indiana Toll Road and immediately becomes the "James W. Shocknessy Ohio Turnpike", more commonly referred to as simply the Ohio Turnpike. The two Interstates cross rural northwest Ohio and run just south of the metropolitan area of Toledo. In Rossford, Ohio the turnpike intersects with Interstate 75 in an area known as the Crossroads of America. This intersection is one of the largest intersections of two Interstate Highways in the United States.

In Elyria Township, just west of Cleveland, I-90 splits from I-80 (leaving the turnpike and running northeast as a freeway). I-80 runs east-southeast through the southern suburbs of Cleveland and retains the Ohio Turnpike designation. Just northwest of Youngstown, the Ohio Turnpike continues southeast onto Interstate 76, while I-80 exits the turnpike and runs east to the north of Youngstown, entering Pennsylvania south of Sharon, Pennsylvania.

In Pennsylvania, I-80 is the main east–west Interstate-standard highway through central Pennsylvania. It runs from the Ohio state line near Sharon to the Delaware Water Gap Toll Bridge over the Delaware River and is called the "Confair Memorial Highway".

It traverses the extreme northern section of the Pittsburgh metropolitan area. A spur from I-80 (I-180) runs to Williamsport, while another (I-380) runs to Scranton. I-80 intersects I-476 in the Pocono Mountains which connects with Scranton, Wilkes-Barre, Allentown and Philadelphia. I-80 intersects I-79 in Western Pennsylvania which connects with Erie (about 75 miles (121 km) to the north) and Pittsburgh (about 55 miles (89 km) to the south). Additional intersections include I-81 connecting Syracuse, NY and Harrisburg while I-99 connects with State College and Altoona. Also in Western Pennsylvania I-80 serves as the western terminus for I-376 which connects it to the Pittsburgh International Airport and on to downtown and suburban Pittsburgh.

A portion of I-80 that goes through New Jersey is called the Bergen-Passaic Expressway.[9]

I-80 does not enter New York City. Once the NJ Turnpike/I-95 was extended in 1971 from its former terminus at US-46 in Ridgefield, NJ to I-80 in Teaneck the section from Teaneck to Fort Lee was resigned as I-95, and it is the latter roadway that enters New York City via the George Washington Bridge. I-80's designated end (as per signage and NJDOT documents) is 4 miles (6.4 km)[10] short of New York City in Teaneck, New Jersey, before the Degraw Ave overpass. There, signs designate the end of I-80 and the beginning of I-95/New Jersey Turnpike northbound.

Therefore, the fact that mileage markers beyond the end of I-80 appear to follow as if they were part of I-80 is a coincidence. They match what would have been the correct mileage markers of I-95 had the Somerset Freeway been built.[citation needed]

One section of I-80 running from Netcong to Denville was constructed in 1958. It is one of the oldest sections of Interstate highway in the United States.[citation needed]

Interstate 80 was included in the original plan for the Interstate Highway System as approved in 1956. The interstate highway was built in segments. The final piece of Interstate 80 was completed in 1986 on the western edge of Salt Lake City. This piece was coincidentally dedicated close to the thirtieth birthday of the Interstate Highway System, which was noted at the dedication and considered to be a milestone in the history of highway construction in the United States.[11] It was also noted at the dedication that this was only 50 miles (80 km) south of Promontory Summit, where the golden spike of the United States First Transcontinental Railroad was laid.[12]

I‑580 on the Oakland–Emeryville city line. The highways travel concurrently to Albany

I‑5 in Sacramento
Nevada

US 95 south-southwest of Lovelock. The highways travel concurrently to Winnemucca.

I‑15 in Salt Lake City. The highways travel concurrently to South Salt Lake.

US 89 in South Salt Lake

I‑215 southeast of Salt Lake City

I‑84 in Echo
Wyoming

US 30 in Little America. The highways travel concurrently to south-southeast of Walcott.

US 191 in Purple Sage. The highways travel concurrently to Rock Springs.

US 287 east of Rawlins. The highways travel concurrently to south-southeast of Walcott.

US 30 southeast of Laramie. The highways travel concurrently to southwest of Cheyenne.

US 30 east-northeast of Cheyenne. The highways travel concurrently to Pine Bluffs.
Nebraska

I‑76 southwest of Big Springs

US 83 in North Platte

US 283 south of Lexington

US 77 in Lincoln. The highways travel concurrently to north-northeast of Lincoln.

US 6 in Council Bluffs

I‑680 northwest of Minden

US 6 on the Clive–Urbandale city line

US 65 in Altoona. The highways travel concurrently through Altoona.

US 63 south of Malcom

US 151 east-northeast of Williamsburg

US 6 north-northwest of Wilton. The highways travel concurrently to Davenport.

US 67 in Le Claire
Illinois

I‑180 northeast of Princeton