From Infogalactic: the planetary knowledge core
(Redirected from Interstate 95 (Florida))
Jump to: navigation, search
This article is about the section of Interstate 95 in Florida. For the entire route, see Interstate 95.

Interstate 95 (I-95) is the main Interstate Highway of Florida's Atlantic Coast. It begins at a partial interchange with U.S. Highway 1 (US 1) just south of downtown Miami, and heads north past Daytona Beach, through Jacksonville, and to the Georgia state line at the St. Marys River near Becker. The route also passes through the cities of Fort Lauderdale, West Palm Beach, and Titusville. 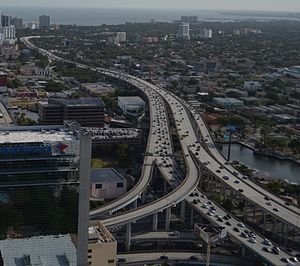 The southern terminus of Interstate 95 in Downtown Miami. In the background, the roadway lowers to surface level at which point it merges with US Highway 1. 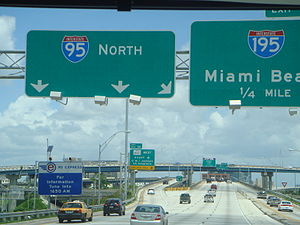 Interstate 95 northbound at the Midtown Interchange in Miami

The highway begins at U.S. Route 1 near 32nd Road in southern Miami. It quickly interchanges with the Rickenbacker Causeway via the short unsigned SR 913, and then heads north into downtown. The short SR 970 freeway, mostly unsigned, distributes traffic to several downtown streets. On the north side of downtown, at the Midtown Interchange, Interstate 395 heads east to the MacArthur Causeway, and the tolled SR 836 heads west to Miami International Airport. Throughout Miami-Dade County, I-95 is designated the North–South Expressway according to some maps.[2]

After crossing I-395 and SR 836, I-95 begins to head north roughly along the alignment of Northwest 6th Avenue, lying one block east of Northwest 7th Avenue (U.S. Highway 441/SR 7). Just north of 36th Street (U.S. Highway 27/SR 25), at what has been called the 36th Street Interchange,[3] I-95 crosses Interstate 195, which goes east over the Julia Tuttle Causeway to Miami Beach, and SR 112, a toll road west to the airport. A two-way Express Lanes roadway in the median begins at I-195 and SR 112, formed by ramps to and from SR 112. I-95 continues north, crossing and interchanging with many surface roads, most of which are State Roads, before reaching the Golden Glades Interchange.

The complicated Golden Glades Interchange provides access between I-95 and two other freeways — the original section of Florida's Turnpike (SR 91), since bypassed by the Homestead Extension (SR 821), and the Palmetto Expressway (SR 826). Ramps are also provided to and from several surface streets - SR 826 east on 167th Street to Sunny Isles Beach, U.S. Highway 441 (SR 7) south on Northwest 7th Avenue and north on Northwest 2nd Avenue, and SR 9 southwest on a limited-access roadway to Northwest 27th Avenue. I-95 north to West Palm Beach, as well as SR 9 southwest to 27th Avenue, runs parallel to the South Florida Rail Corridor, used by CSX Transportation for freight and Tri-Rail for commuter rail. At the Golden Glades Interchange, SR 9 merges with I-95, and I-95 is unsigned as State Road 9 for the remainder of its length.[1]

North of Miami, I-95 continues on to Ft. Lauderdale, where it interchanges with I-595, providing access to Fort Lauderdale-Hollywood International Airport and Port Everglades to the east, and Broward County's western suburbs as well as I-75 northbound (via Alligator Alley) across the peninsula to the Gulf Coast to the west. In West Palm Beach, I-95 provides direct access to Palm Beach International Airport as well as downtown West Palm Beach and Palm Beach Island via SR 704 (Okeechobee Blvd.). North of West Palm Beach, I-95 and the Florida's Turnpike literally run right next to each other for 17 miles (27 km) between Donald Ross Road in Jupiter and CR 713 in Palm City. After the interchange with CR 713, I-95 crosses over the Turnpike in an extreme detour through the western reaches of Martin County before heading north towards St. Lucie County. Providing access to the western portions of Port St. Lucie via 5 interchanges, I-95 eventually crosses over the Turnpike a final time just north of the Midway Road (CR 712) interchange. Both freeways eventually go separate ways north of Fort Pierce; I-95 continues directly along the coast; Florida's Turnpike turns west toward Orlando.

Just before the interchange with State Road 70 (providing access to the Turnpike), the highway widens from 3 to 5 lanes in each direction; after the interchange with SR 70, I-95 narrows to 4 lanes in each direction. I-95 further narrows to three lanes in each direction after its interchange with State Road 614. The road soon enters Indian River County and the next major exit is with State Road 60 providing access to Vero Beach. The highway soon enters Brevard County and the Space Coast of Florida, continuing past Melbourne, Viera, and Cocoa. The next major junction is State Road 528 with access to Cocoa Beach, and Cape Canaveral eastbound and tolled access to Orlando to the west. Continuing north past Titusville, I-95 enters Volusia County and the city of Daytona Beach shortly afterwards, where it meets with the eastern terminus of Interstate 4. The highway passes through Flagler and St. Johns counties before it enters Duval County and the city of Jacksonville. 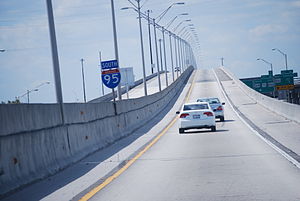 About 5 miles (8.0 km) north of the St. Johns-Duval county border, I-95 intersects the I-295 beltway at its southern end 14 miles (23 km) south of central Jacksonville, with I-95 continuing north. The Interstate passes through the heart of Jacksonville, crossing the Fuller Warren Bridge over the St. Johns River, which was rebuilt from its original drawbridge incarnation in 2002. About a mile north of the bridge, at exit 351B, it intersects with the national eastern terminus of I-10, with the interchange's redesign completed in September 2010.[4] From here to exit 353B, it is concurrent with US 17 and its unsigned designation SR 15.[1] The stretch from here in Downtown Jacksonville south past the southern interchange with the Jacksonville Beltway, I-295, can be very congested during morning and evening rush hours, with traffic often grinding to a halt. Well over 100,000 cars use this section per day, with even higher traffic counts in some areas.[5] I-95 intersects I-295 again at exit 362, 11 miles (18 km) north of Downtown Jacksonville. Just north of the northern I-295 interchange, I-95 provides access to Jacksonville International Airport. From this point, I-95 continues north towards Nassau County with an exit for State Road A1A and then into Georgia, just north of mile marker 380. 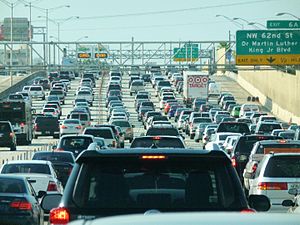 During rush hour, even the variable toll express lanes can become congested.

The current HOV lanes in both directions between I-395 in Miami and Broward Blvd. (SR 842) in Northern Miami and Fort Lauderdale are converted to High Occupancy toll lanes, with two lanes in each direction. Prices vary based on congestion and peak hours and tolls are collected electronically, while registered travelers with 3 or more passengers and hybrid vehicles can drive the toll lanes for free. Both HOT lanes have been completed in both directions from I-395 to the Golden Glades Interchange (including toll gantries).[6]

Interstate 95 was initially signed in 1959, and the first section to be opened to traffic was in Jacksonville in 1960. A year later, a short section just north of the current I-195 in Miami opened. The Miami News in 1956 touted the construction of what would become I-95 in Miami as a "...slum clearance program."[7] Most of the construction was focused between Jacksonville and Daytona Beach in the early 1960s. Construction of the Fuller Warren Bridge cut off the historically black Jacksonville neighborhood called Brooklyn.[8] At the end of the decade, the highway was complete from U.S. 17, just south of the Georgia state line to Interstate 4 in Daytona Beach (Georgia had not completed their portion of I-95 at the time of Florida's completion). The segment from Ft. Lauderdale to Miami was complete by 1970. By 1976, most of the highway was complete from the Georgia State Line to Ft. Pierce as well as Palm Beach Gardens to Miami.[citation needed] 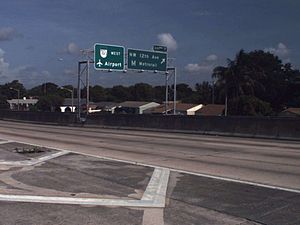 Remnant of sequential exit numbering, on the ramp from the southbound express lanes to SR 112 west 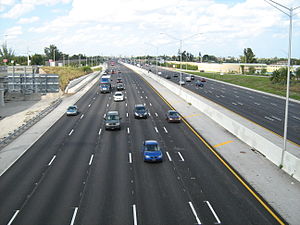 The Bureau of Public Roads approved an Interstate 95 alignment that used 41 miles (66 km) of Florida's Turnpike from PGA Boulevard (SR 786) in Palm Beach Gardens north to SR 70 in Ft. Pierce in the 1950s.[10][11] In the mid-1960s, the State Road Department authorized traffic counts be conducted to determine if the separation of Interstate 95 from the Turnpike was feasible, with arguments that using a concurrent alignment was costing Florida money for Federal Highway funding, but not without the concern of losing toll revenue.[12] Interstate 95 was given a separate alignment from Florida's Turnpike in 1973.[13]

Over time, the Interstate adopted a separate route closer to U.S. Route 1, including parallel with the turnpike between Stuart and Palm Beach Gardens and was originally scheduled to be completed in 1972. However, resistance by Martin County officials due to environmental and unwanted growth concerns delayed the highway's completion for 15 years, requiring those who wanted to travel through the Treasure Coast to take either the slower US 1 or the tolled Turnpike.[14] This section opened to traffic on December 19, 1987, with I-95 running uninterrupted from Miami to the state line.[15] 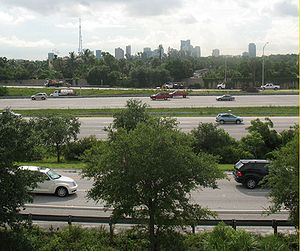 Interstate 95 as it goes through Fort Lauderdale

Interstate 95 is at least three lanes in each direction for the full 382 miles.

Plans commenced in November 2014 to reconstruct 4.41 miles (7.10 km) of Interstate 95 around the interchanges at Exit 260 (I-4) and Exit 261 (US 92), with the addition of dedicated lanes to separate entering and exiting traffic from long distance traffic in this dangerous section.[16] Namely, southbound Interstate 95 had a dangerous merge situation stemming from the fact that traffic from US 92 used to come in on the left side and any driver wishing to go to I-4 west would have to cross over all the lanes of Interstate 95 south within a half mile. This merge ramp was removed as part of this project thus rectifying the situation. This construction project cost $205 million with expected completion in summer 2020, after numerous delays.

Express lanes begin in Downtown Miami and are planned to extend as far north as Jupiter. All exits are unnumbered.