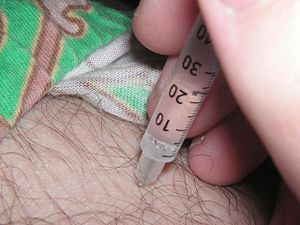 IM into the leg

Intramuscular (also IM or im) injection is the injection of a substance directly into a muscle. In medicine, it is one of several alternative methods for the administration of medications (see route of administration). It is used for particular forms of medication that are administered in small volumes. Depending on the chemical properties of the drug, the medication may either be absorbed fairly quickly or more gradually. Muscles have larger and more blood vessels than subcutaneous tissue and injections here usually have faster rates of absorption than subcutaneous injections or intradermal injections.[1] Depending on the injection site, an administration is limited to between 2 and 5 milliliters of fluid.

Examples of medications that are sometimes administered intramuscularly are: 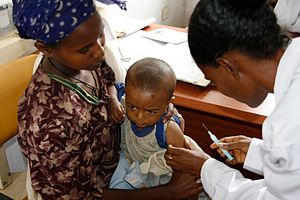 In addition, some vaccines are administered intramuscularly:

Sites that are bruised, tender, red, swollen, inflamed or scarred are avoided.[1] Intramuscular injections are often given in the deltoid muscle of the arm, the vastus lateralis muscle of the leg, and the ventrogluteal and dorsogluteal muscles of the buttocks.

The ventrogluteal site is recommended for medications known to be irritating, viscous or oily and, along with the deltoid site, for adults. To locate the site, place the palm of your hand over the greater trochanter, with the fingers facing the patient's head. The right hand is used for the left hip and left hand is used for the right hip. Place the index finger on the anterior superior iliac spine and run the middle finger back along the iliac crest. The injection is given in the center of the triangle that is formed.[1] 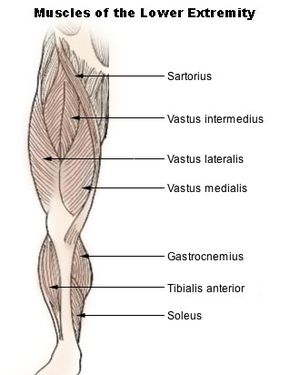 The vastus lateralis site is the recommended site for infants and, along with the deltoid site, for toddlers and children and for biologicals for young children. To locate the site, divide the front thigh into thirds vertically and horizontally to make nine squares and inject in the outer middle square.[1] 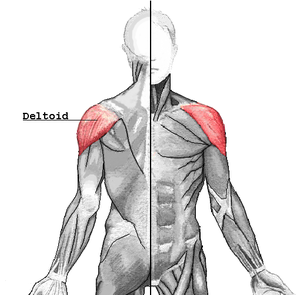 The deltoid muscle site is recommended, along with the vastus lateralis site, for toddlers and children and, along with the ventrogluteal site, for adults and for biologicals for older children and adults, Hepatitis B and Rabies vaccines. To locate the site, palpate the lower edge of the acromion process. Inject in the upside down triangle that forms with its base at the acromion process and its midpoint in line with the axilla.[1]