On February 18, 1797, a fleet of 18 warships under the command of Sir Ralph Abercromby invaded and took the Island of Trinidad. Within a few days the last Spanish Governor, Don José María Chacón surrendered the island to Abercromby.

Spain, previously an ally of Great Britain, had been defeated in the War of the Pyrenees against France in 1795 and forced to sign the Peace of Basel. An alliance convention between France and Spain was signed the following year in 1796. British forces in the Caribbean in 1796 had already taken French colonies such as Saint Lucia and later Dutch colonies in South America; Demerara and Essequibo. With the Spanish now at war with Great Britain, Ralph Abercromby thought it was right to necessarily render Spain's colonies an immediate object of attack. His first target was the Spanish island of Trinidad which being close proximity to Tobago which had been captured early in the war. The island had been Spanish since the third voyage of Christopher Columbus in 1498 and since 1777 was a province of the Captaincy General of Venezuela.

On the 12th of February, an expedition, composed of four sail of the line, two sloops and a bomb-vessel, under the command of Rear-Admiral Henry Harvey, in Prince of Wales, having on board his ship Lieutenant-general Sir Ralph Abercromby, as the commanding officer of the troops to be employed, quit Port-Royal, Martinique. On the 14th the rear-admiral arrived at the port of rendezvous, the island of Carriacou, and was there joined by another sail of the line, the 74-gun third-rate (Invincible), two frigates, three sloops, and several transports, containing the troops destined for the attack.

On the 15th the squadron and transports again set sail, running between the islands of Carriacou and Grenada. On the morning of the next day the whole flotilla arrived off Trinidad and steered for the Gulf of Paria. Just as the British squadron had passed through the Great Bocas channel, a Spanish squadron was discovered at anchor in Chaguaramus Bay, consisting of the following four sail of the line and one frigate: San Vincente (Captain Don Geronimo Mendoza; 84 guns), Gallardo (Captain Don Gabriel Sororido; 74 guns), Arrogante (Captain Don Raphael Benasa; 74 guns), San Damaso (Don Tores Jordan; 74 guns), and Santa Cecilia (Captain Don Manuel Urtesabel; 36 guns), all under the command of Rear-Admiral Don Sebastian Ruiz de Apodaca.

The apparent strength of the battery on Gaspar Grande island, which, mounting 20 cannon and two mortars, commanded and might have disputed, the entrance to the enemy's anchorage, caused Hardy to order the transports, under the protection of Arethusa, Thorn, and Zebra, to anchor a little further up the gulf, at the distance of about five miles from the town of Port-d'Espagne, while Alarm, Favourite, and Victorieuse kept under sail between the transports and Port-d'Espagne, to prevent any vessels escaping from the latter.[Note 1] In the mean time, the rear-admiral, with his four sail of the line, anchored, in order of battle, within random-shot of the Spanish batteries and line-of-battle ships, to be prepared in case the ships, having all their sails set and appearing to be ready for sea, should attempt during the night to escape.

The British began to observe flames bursting out from one of the Spanish ships. In a short time three others were on fire and all four continued to burn with great fury until daylight. The Spanish had set the ships on fire as most the marines & seamen were ashore. The San-Damaso escaped the conflagration and, without any resistance, was brought off by the boats of the British squadron.[6] The Spaniards meanwhile, had abandoned Gaspar Grande and soon after daylight a detachment of the 14th Regiment of Foot occupied the island. In the course of the day the remainder of the troops landed about three miles from Port of Spain, without the slightest opposition, and on the same evening, quietly entered the town itself. This led to the Spanish governor José María Chacón offering to capitulate; on the following day, the island of Trinidad surrendered to the British arms, without an effort at defence and without any casualties.[6]

On 17 April 1797, Sir Abercromby fleet invaded the island of Puerto Rico with a force of 6,000-13,000 men,[7] which included German soldiers and Royal Marines and 60 to 64 ships. Fierce fighting continued for the next days. Both sides suffered heavy losses. On Sunday, April 30 the British ceased their attack and began their retreat from San Juan. 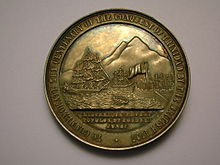 1897 medallion commemorating the centenary of the capture of Trinidad

Trinidad became a British crown colony, with a French-speaking population and Spanish laws. The conquest and formal ceding of Trinidad in 1802 led to an influx of settlers from England or the British colonies of the Eastern Caribbean. The sparse settlement and slow rate of population increase during Spanish rule and even after British rule made Trinidad one of the less populated colonies of the West Indies with the least developed plantation infrastructure.[8]

The next year the British invasion force shared in the allocation of £40,000 for the proceeds of the ships taken at Trinidad and the property found on the island.[9]

The King of Spain Charles IV set up a "Council of War" to look into the surrender. By Royal Decree, the ex governor of Trinidad Jose Maria Chacon and Rear Admiral Sebastián Ruiz de Apodaca (who had scuttled his small fleet) were banished for life from the "Royal Domain." Apodaca's case was reconsidered and he was reinstated in 1809, but Chacón died in exile in Portugal.[10]