Cairnbulg Castle, one of The Nine Castles of Knuckle, originally dated to the 13th century and parts of the current construction are believed to date to an early period[4] but whereas the land of Inverallochy was granted by Earl Alexander to Jordan Comyn in 1277, there is no indication that the now-ruined Inverallochy Castle was built at such an early date.[5] Cairnbulg Castle was a stronghold of the Comyns, but was given by Robert the Bruce to the Earls of Ross in 1316 following the Harrying of Buchan, then passed to the Frasers from 1375 until 1666. The current construction is a late 19th-century re-build following a century of abandonment and dereliction. 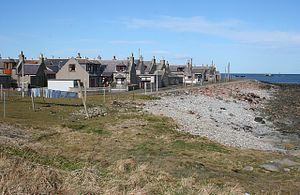 Houses by the sea

Well established fishing communities were in place in the area by the early 16th century, but after an epidemic of cholera in the 1860s wiped out the "collections of huts next to which fishing boats were dragged out of reach of the tide", planned fishing settlements were recreated at Inverallochy and the twinned village Cairnbulg. As a result of this planning, within twenty years over 200 boats were based here, although in recent years this has dwindled back to almost none as larger, commercial operations became focused on the nearby ports of Fraserburgh and Peterhead.

Cairnburg railway station was opened on the 1st of July 1903. It was originally named Inverallochy, but was renamed on the 1st of September, 2 months after it opened. The station closed in 1965.[6]

Owing to the close proximity of the villages to one another, the name Invercairn has in recent years become used on a local basis to represent both.

Inverallochy is most renowned for its 18-hole links golf course, which looks out over the North Sea from every hole. Although it can be described as "short" at 5375 yards, it is considered a "challenge for any level of golfer" due to dependency on the wind direction and strength.

People may visit Inverallochy to see Maggie's Hoosie, a preserved 19th century fisherwife's cottage. It features "old-time" streets with higgilty piggilty paths, beaches and Cairnbulg harbour, built in the 1920s as a single pier. This was further developed in the early 1980s using WW2 tank traps to create an enclosed harbour basin. The facility is currently being re-developed with the help of a Lottery grant to deepen the facility and add pontoon berthing for 20 more berths.

Inverallochy School was established in 1841 as a 36 × 20 feet building that seated 88 scholars. Increased attendance demanded further funding in 1866 to seat 130 scholars and 240 in 1872. It finally reopened in 1965 after a substantial extension to include eight new classrooms, general purpose room, a school meal scullery, an assembly hall–gymnasium and art room. The eight old classrooms were turned into homecraft rooms with housewifery area, science rooms and library.

In 1951, a local profoundly deaf lad, James Duthie, fondly known as Dummy Jim set off alone for the Arctic Circle on his bicycle. A feature film - partly shot in the area - and based on Duthie's journal 'I Cycled Into The Arctic Circle' (first published in 1955) is due to be released in 2011..[needs update]