From Infogalactic: the planetary knowledge core
Jump to: navigation, search
For other uses, see Inverclyde (disambiguation).

Inverclyde District was one of nineteen districts within Strathclyde Region, from 1975 until 1996. Prior to 1975, Inverclyde was governed as part of the local government county of Renfrewshire, comprising the burghs of Greenock, Port Glasgow and Gourock, and the former fifth district of the county. Its landward area is bordered by the Kelly, North and South Routen burns to the south west (separating Wemyss Bay and Skelmorlie, North Ayrshire), part of the River Gryfe and the Finlaystone Burn to the south-east.

It is one of the smallest in terms of area (29th) and population (27th) out of the 32 Scottish unitary authorities. Along with the council areas clustered around Glasgow it is considered part of Greater Glasgow in some definitions,[1] although it is physically separated from the city area by open countryside and does not share a border with the city.

The name derives from the extinct barony of Inverclyde (1897) conferred upon Sir John Burns of Wemyss Bay and his heirs.

Until recently, Inverclyde was the only authority in the United Kingdom not to have named electoral wards: whilst the local authority reserved its right to name wards, it failed to supply any to the Local Government Boundary Commission. This was rectified in the 2006 review.

Following the Council elections of 2012, 10 Labour Councillors were elected, 6 SNP, 2 Liberal Democrats, 1 Conservative and 1 Independent. In 2014 during the Scottish Independence Referendum, one of the Labour Councillors, Cllr V. Jones, announced she would be supporting the YES campaign, and shortly thereafter left the Labour party, remaining on the Council as an Independent member. Therefore, the current composition of Inverclyde Council is:

The election resulted in no overall control of the council. 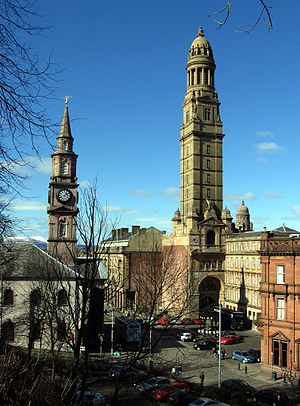 The council is based at the Municipal Buildings in Greenock.

The council gained national notoriety in 2005 following harsh criticism from the Accounts Commission regarding poor leadership and accountability.[2] In November 2005 the council was given a 6-month deadline to reorganise and improve further, following the resignation of the council chief in September and organisational changes in the wake of the original report.[3]

Following this criticism the Chief Executive of Inverclyde Council Robert Cleary stepped down and a new chief executive John Mundell was appointed. The position of Chief Executive commands an annual salary of £112,000. There was criticism over the benefits the outgoing chief executive received on leaving—he was given a six figure severance payment and his pension will be approximately £50,000 per annum.[citation needed]

In June 2006, changes were still ongoing: Inverclyde Council altered its directorship structure by adding new corporate director positions and removing senior manager positions. It was expected that the £90,000 a year posts will mostly be filled by new applicants, although existing Council workers were able to apply.[4] There was some criticism with regards to the merging of council services; for instance, Education and Social Work merged and now share the same director. This was frowned upon as at the time the Director responsible for the two merged departments had an educational qualification, not a social work one.

The 2007 council elections took place at the same time as the Scottish Parliament elections. The Liberal Democrats lost nine seats; Labour gained two, but fell short of a majority. The SNP and Conservatives both entered the council with five seats and one seat respectively, while an independent candidate also won a place. In 2014, one of the Labour Councillors, Vaughan Jones, announced she would be supporting a YES vote in the Independence referendum - and shortly thereafter left the Labour party, to remain on the Council as an independent member.[5]

The Inverclyde has numerous primary schools serving all areas of its settlements. These are connected to several Secondary schools which serve Inverclyde as follows:

According to research by the Chartered Society of Physiotherapy, Inverclyde male residents enjoy the second-lowest life expectancy in the UK, with only Glasgow having a shorter projected lifespan per resident. The average Inverclyde male lives for 73.7 years. The average Inverclyde female lives for 79.9 years, to rank 28th out of the 32 areas in Scotland.[13] There are large health disparities between settlements in Inverclyde with many health indicators being above the Scottish average in certain areas, whilst considerably below in others.[14]