Inverurie /ɪn.vərˈʊəri/ (Scottish Gaelic: Inbhir Uraidh[1] or Inbhir Uaraidh,[2] "mouth of the River Ury") is a Royal Burgh and town in Aberdeenshire, Scotland at the confluence of the rivers Ury and Don, about 16 miles (26 km) north west of Aberdeen on the A96 road and is served by Inverurie railway station on the Aberdeen to Inverness Line. The nearest airport is Aberdeen Airport at Dyce. 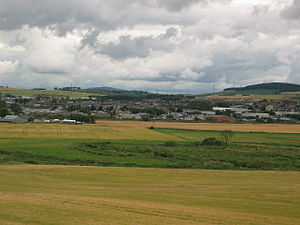 Inverurie is located in the valley of the River Don at the centre of Aberdeenshire and is known locally as the Heart of the Garioch. It sits between the River Don and the River Ury and is only 10 miles (16 km) from the imposing hill of Bennachie. The town centre is triangular and is dominated by the grand Town Hall built in 1862. In the middle of the 'square' (as it is known locally) is the Inverurie and District War Memorial, capped by a lone Gordon Highlander looking out over the town. The main shopping areas include the Market Place and West High Street which branches off from the centre towards the more residential part of the town. South of the River Don is the village of Port Elphinstone, which is part of the Royal Burgh of Inverurie and is so called due to the proximity of the Aberdeenshire Canal (Inverurie to Aberdeen) (now disused).

The word "Inverurie" comes from the Scottish Gaelic Inbhir Uraidh meaning "Confluence of the Ury" after the river which joins the Don just south of the town.

In the 19th century, with the increased use of the postal service, many letters addressed to "Inverury" were being sent to "Inverary" in Argyll, on the south west coast of Scotland. The town council ordained that the name to be used for council business should be "Inverurie" which they also regarded as being the "ancient spelling". They asked the public to use this spelling in future and said that the Postmaster General had accepted the change. The town clerk made the official announcement on 20 April 1866.[3]

Inverurie is said to have been founded by David of Huntingdon, Earl of the Garioch, brother of Malcolm IV, great-great-grandfather of Robert the Bruce who defeated John Comyn, 3rd Earl of Buchan nearby at the Battle of Barra in May, 1308.

However, the town's earliest known charter dates from 1558, with its modern development taking place after the building of the Aberdeenshire Canal linking Port Elphinstone with Aberdeen Harbour in 1806. The Inverurie Locomotive Works (1905–1969) led to a modest increase in size and prosperity, but it was not until the "Oil Boom" of the last quarter of the 20th century that the town developed into much of its present form.

On a nearby hillside the Easter Aquhorthies recumbent stone circle dates back to the 3rd millennium BC. On the outskirts of the town the Brandsbutt Stone is a class I Pictish symbol stone with an ogham inscription. There have been three well known battles in the town: The Battle of Inverurie (1308), the Battle of Harlaw (1411) between Donald of Islay, Lord of the Isles (MacDonald) and an army commanded by Alexander Stewart, Earl of Mar; and the Battle of Inverurie (1745) during the Jacobite Rebellion of that year.

The House of Aquahorthies is at Burnhervie on the edge of Inverurie, built around 1797. The house served as a Catholic seminary until 1829 and since then has been a private family home.

Inverurie is a market town, now with a monthly Farmer's Market, with many small shops, businesses and services. Its main industries other than service and commerce are agriculture, oil and, until International Paper closed the mill in March 2009, paper manufacture. Coombes, a small sweet shop, was famed as being the oldest family-owned business in Scotland until the death of Colin Coombes in 1957 whereupon the business closed.

The Great North of Scotland Railway constructed its locomotive construction and repair works on a 15-acre (61,000 m2) site at Inverurie.

Agriculture continues to be a mainstay of Inverurie's economy, as it has done since the town's inception. Thainstone Mart, to the south east of the town, is the biggest livestock market in Scotland, and rents out commercial units to various agricultural support services, oil industry storage yards and vehicle hire companies. Lying beside Thainstone Mart, the paper mill was a big employer until the mill was closed in 2009, and is now the site of an industrial site and storage yards for oilfield equipment.

Following the discovery of North Sea oil in the mid-1970s, several oil service companies appeared in Inverurie. Many residents who work in this sector do so on offshore oil installations in the North Sea on a "two week on- two week off" or "four week on" or "six week on" basis in addition to those who work in the town itself.

In recent years, Inverurie has also seen increasing numbers of Aberdeen commuters going to live there making it "the fastest growing town in Great Britain", and increasing congestion on the A96 trunk road to Aberdeen.

A 98,000 sq ft (9,100 m2) retail park opened in June 2009 with stores including Homebase, Argos, Lidl, Halfords, Iceland, Home Bargains and Currys trading. The site is located near the town centre, is close to the railway station and has 378 car parking spaces (when free from flooding).

The town is served by Inverurie Hospital.

Some Inverurie natives speak the Aberdeenshire Doric dialect of Scots.

Historically, Pictish is the ancient language of the area, which can be found in many placenames. It appears to have been a Brythonic language, but its classification remains uncertain.

Pictish was eventually replaced by Scottish Gaelic in the area, and evidence of the language is found both in words in the Doric and in placenames, such as Inverurie itself. The Book of Deer originates from a few miles to the north east.

The oldest church in Inverurie is St Andrew's Parish Church [2], part of The Church of Scotland. It was founded in the 9th century by the Culdee monks on the left bank of the River Don at its junction with the Polnar Burn on the lands of Baddifurrow now known as the estate of Manar. It was known as the “Kirk of Rocharl”.

Soon after the erection of the “Kirk of Rocharl”, two dependent chapels were built – one at Montkegy (now the parish of Keithhall), the other at “The Bass” on the banks of the River Ury. A fort stood on this mound and this latter chapel was probably built to accommodate the settlers within and around the stronghold on the banks of the River Ury. A Manse was built there and the kirkyard also grew around it. This graveyard is now known locally as “The Bass” or “The Old Cemetery”.

During the reign of Malcolm Canmore (1057) and his Queen, Margaret, Inverurie was created one of the new Saxon parishes with its dependent chapel at Montkegy placed under the care of Lindores Abbey in Fife.This change from Culdean Christianity in Scotland was displaced by the Roman system, and probably occasioned the building of a new church at Polnar, and the placing of the parish under the protection of a saint. The name “Kirk of Rocharl” disappears after 1198 and “The Chapel of Apollinaris” takes its place. This is the only such dedication in Scotland, though it is popular on the Continent.

In the 14th century, (during the reign of King Robert the Bruce) the Chapel at Polnar lost its importance and was doomed to fall into decay, while the Church at the Bass assumed the name and dignity of the parish church. This daughter chapel of the “Kirk of Rocharl” (now the parish church) was ultimately to become the real centre of Christ’s faith in the district until 1774, while the church at Monkegy remained dependent on Inverurie until 1631.The first General Assembly of the Church of Scotland met in 1560, and thirteen years later Inverurie received its first minister, the Rev George Paterson who was also “Bishop” of the Garioch. He had supervision of Daviot, Montkegy, Kinkell and Kintore.

The third Church of Scotland minister of Inverurie, (Alexander Mill – a royal “presentee” of King James I), had the Manse transferred from the Bass to the site of the present Kirk before 1600, by the Sketry Burn. Four ministers were appointed in turn after Forbes. In 1770 William Davidson was inducted as minister of Inverurie. During his ministry a “mystery church” was built on the present site of the Kirk in 1775, using stones from the old Kirk at “The Bass”. Sixty-six years later it was demolished, for reasons lost with the passage of time.

Davidson’s successor (Robert Lessell – minister, 1800–1853) was responsible for the building of the present building on the site, erected to the Glory of God and dedicated as such on 14 August 1842.Only a year later, in 1843, the first General Assembly of the Free Church of Scotland took place in Edinburgh. In 1877 the “Free Kirkers” built their present church on the West High Street, Inverurie.

At the union of the United Free Church and The Church of Scotland in 1929 the “Auld Kirk” of Inverurie was renamed as “The South Parish Church”. In 1953 it adopted the name “St Andrew’s Parish Church”.In the 1960s, under the leadership of The Revd Douglas Lister, the Church was re-ordered to accommodate a restoration of the Scoto-Catholic Movement in The Church of Scotland which brought back a sense of "dignity" to worship. The Communion Table was restored to its prominent place in the centre of the chancel, a new pulpit was commissioned and placed at the north side of the chancel and the lectern at the south side. A central aisle was created.

In 2011 St Andrew's completed an extensive renovation of the church and replacement of the two-manual Peter Conacher Organ with a three-manual Physis organ. There is now an extended vestibule area and a Church Office. As part of the Renovation a new Chapel/Meeting-Space dedicated to St Apollinarus was created to house The War Memorials and other artefacts. This Chapel of St Apollinarus is open on a daily basis for private prayer and meditation.

St Andrew's is currently the Conventual Church for the Priory of St Margaret of Scotland (Order of St John of Jerusalem - Knights Hospitaller) and its minister (The Revd T Graeme Longmuir, Grand Cross of Honour Saint John) is Prelate.

In the mid-20th Century, the West Church elected to return to the Church of Scotland, however, the two churches stayed separate due to the burgeoning growth in the town. The West Church has recently gone through major renovation which involved the creation of two floors in the Church building- the upper being used for Sunday worship, funerals, weddings and concerts and the lower housing a popular cafe and fairtrade shop as well as the church office.

Other Churches and places of worship in Inverurie include St Mary's Church (Scottish Episcopal), The Roman Catholic Church, The Baptist Church, The Gospel Hall and the Salvation Army Meeting Hall.

Rugby Union is played by Garioch RFC who are based at Kellands Park.

Inverurie is also a member of the Aberdeenshire Cricket Association.

Former Olympic Bowler George Marshall was born in Inverurie in 1936.

Colony Park F.C. are the town's juvenile team, founded by Dod Reid MBE in 1978. It is the largest juvenile club in Scotland with over 400 members. They also have an amateur team and a juniors team who both play their home games at Colony Park, Harlaw Road.

Garioch Gymnastics Club are based at the towns Community Centre. The club is home to several gymnasts who have represented Scotland both Nationally and Internationally including 2014 Junior Scottish Champion - Izzy Tolometti.

There are four primary and one secondary school: