Sports Authority Field at Mile High, previously known as Invesco Field at Mile High, and commonly known as Mile High or Mile High Stadium, is an American football stadium in Denver, Colorado. The field is named after a sponsor and the stadium is named Mile High. The stadium's primary tenant is the Denver Broncos of the National Football League (NFL). The stadium opened in 2001 to replace Mile High Stadium. The stadium was largely paid for by taxpayers in the Denver metropolitan area and the property is owned by a special taxing district.[6][7] More controversially, Invesco paid $120 million for the original naming rights, before Sports Authority secured the naming rights on August 16, 2011.[8]

Many fans opposed a corporate name and wished to retain the previous venue's name, "Mile High Stadium".[9] The Denver Post initially refused to use the Invesco label and referred to it as Mile High stadium for several years before changing its policy and adding Invesco to articles.

On August 16, 2011, The Metropolitan Stadium District announced Invesco would immediately transfer the naming rights to Englewood, Colorado-based Sports Authority in a 25-year agreement worth $6 million per year.

It is used primarily for American football games. It is the home field for Denver's National Football League team, the Denver Broncos. The stadium also hosts the city's Major League Lacrosse team, the Denver Outlaws. In college football it has hosted the rivalry game between the Colorado State University Rams and the University of Colorado at Boulder Buffaloes. It is also used for the CHSAA class 4A and 5A Colorado high school football state championship games, and has been used for the CBA Marching Band Finals.

In addition, it has been used for the DCI (Drum Corps International) Championships in 2004 and the annual Drums Along the Rockies competition. It is also used for concerts, music festivals and other events. It was the former home of the city's Major League Soccer franchise, the Colorado Rapids.

It marks the completion of a six-year sporting venue upgrade program in Denver, including Coors Field and Pepsi Center. As with the other venues, the stadium was constructed to be easily accessible. It sits along Interstate 25 near the Colfax Avenue and 17th Avenue exits. It is also bordered by Federal Boulevard, a major Denver thoroughfare, on the west side. A dedicated light rail station also serves the stadium. The stadium is located in the Sun Valley neighborhood.

A home game tradition (carried over from the original Mile High Stadium) is the "Incomplete Chant." At Bronco home games, when the opposing team throws an incomplete pass, the stadium announcer will state "Pass thrown by [the opposing quarterback] intended for [the opposing intended receiver] is..." at which time the fans complete the chant by saying "IN-COM-PLETE!!" This is followed by the "sad trombone" sound effect.[10]

The stadium has sold out every Denver Broncos' home game since its inception in 2001, carrying over the "sold-out" tradition from Mile High Stadium, where every home game had been sold out since 1970 (though due to NFL policy, local TV broadcasts did not start until 1973). Another tradition carried over from Mile High Stadium is during halftime or towards the end of the game, the stadium's public-address announcer will announce the actual attendance for the game as well as how many people didn't show up for the game, and if that number is generally over a thousand, Broncos fans chant a loud "boo" towards those empty seats. The empty seats should not be taken as the game not being sold out, it just simply means some fans with tickets did not show. During the stadium's first years, another tradition was carried over from Mile High, where Broncos fans on each side of the stadium would chant "Go" "Broncos," and they would go back and forth chanting it for many minutes. That tradition has since died out. Another long term tradition is the "South Stands," where it is known to be the loudest and most fierce portion of the stadium.

Finally, especially in the upper two decks, the usually cold fans create their own 'Mile High Thunder' (and warm themselves up) by stamping their feet on the stadium's floors. The old Mile High Stadium was built with bare metal, and the 'Thunder' reverberated readily. The new stadium also took steps via the addition of steel floors to preserve this unique acoustic.[11] On December 21, 2012, the Broncos announced a $30 million renovation project prior to the start of the 2013 season, including a new high-definition LED video board on the stadium's south end zone that triples the size of the old video board.[12] 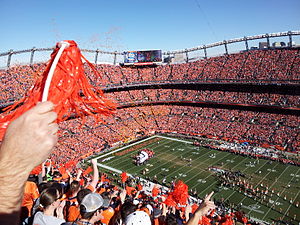 Sports Authority Field at Mile High before the start of the 2013 AFC Championship game.

The stadium has hosted several NFL playoff games. It hosted the 2006 AFC Divisional Playoff, in which Denver beat the New England Patriots 27–13. The following week, it hosted the 2005–06 NFL playoffs, which the Broncos lost to the Pittsburgh Steelers, 34–17. On January 8, 2012, the stadium hosted its third NFL Playoff game, an AFC Wild Card Weekend match against the Pittsburgh Steelers. The Denver Broncos won in overtime, 29–23. On January 12, 2013, the stadium hosted its fourth NFL Playoff game, an AFC Divisional weekend match against the Baltimore Ravens which the Denver Broncos lost 35–38 in 2OT.[citation needed]

On October 29, 2007, a record crowd of 77,160 watched the Broncos lose to the Green Bay Packers 19–13 on Monday Night Football on the first play from scrimmage in overtime.[citation needed]

On November 26, 2009, it hosted its first Thanksgiving game, when the Denver Broncos took on the New York Giants. The game was televised on the NFL Network, which the Broncos won by a final score of 26–6.[citation needed]

On January 19, 2014, the Broncos defeated the New England Patriots in the AFC Championship Game by a score of 26-16 in front of 77,110, advancing to their first Super Bowl since they began play in the new stadium.

The field at Sports Authority Field at Mile High.

The main entrance of the stadium, when it was known as Invesco Field at Mile High. 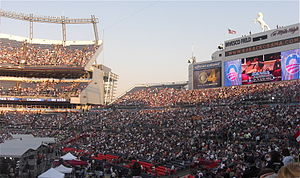 The south endzone as it looked during the final day of the 2008 Democratic National Convention. 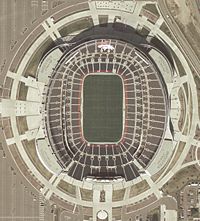 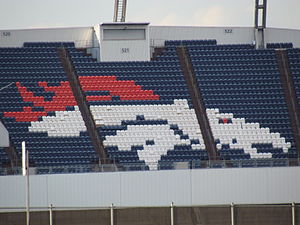 The stadium has held several concerts. The first event held was a concert by the Eagles. Irish rock band U2 performed at the stadium on May 21, 2011, during their U2 360° Tour in front of a sold out crowd of 77,918 people. The show was originally to be held on June 12, 2010, but was postponed, due to Bono's emergency back surgery.

In August 2004, it hosted the Drum Corps International Division I World Championships.[13]

On August 28, 2008, Democratic presidential nominee Barack Obama accepted the Democratic Party's nomination for President of the United States here, moving the 2008 Democratic National Convention from Pepsi Center. Approximately 84,000 people attended Obama's speech, exceeding the normal capacity of the stadium due to the placement of audience on the field.[14][15][16][17]

On July 26, 2014, Sports Authority Field at Mile High hosted a soccer match between Manchester United and A.S. Roma which was part of the 2014 International Champions Cup and Manchester United won the match 3-2.[18]

* Also in the Pro Football Hall of Fame

While the ring of fame was carried over from the old stadium to the new, the names were re-ordered to segregate the pre-Pat Bowlen (the team's owner and founder of the Ring) era and the post-Bowlen era. One of the most noticeable changes was the move of John Elway's name to the center of the ring, in-between the goalposts of the North endzone.[19]

The Colorado Sports Hall of Fame Museum opened in August 2001. It is located at Gate #1 on the west side of the stadium.