From Infogalactic: the planetary knowledge core
Jump to: navigation, search
For the "salon in the sky" concept advanced by Leo Strauss, see Persecution and the Art of Writing. 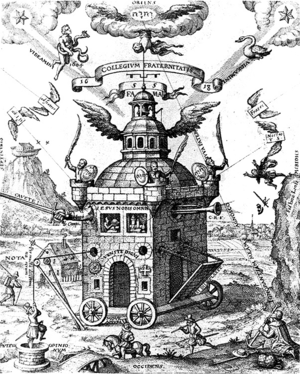 Emblematic image of a Rosicrucian College; illustration from Speculum sophicum Rhodo-stauroticum, a 1618 work by Theophilus Schweighardt. Frances Yates identifies this as the "Invisible College of the Rosy Cross".[1]

The Invisible College has been described as a precursor group to the Royal Society of London, consisting of a number of natural philosophers around Robert Boyle. It has been suggested that other members included prominent figures later closely concerned with the Royal Society;[2] but scholarly debate persists as several groups formed before that of the Royal Society, and which members joined one organization before the other.

The concept of "invisible college" is mentioned in German Rosicrucian pamphlets in the early 17th century. Ben Jonson in England referenced the idea, related in meaning to Francis Bacon's House of Solomon, in a masque The Fortunate Isles and Their Union from 1624/5.[3] The term accrued currency for the exchanges of correspondence within the Republic of Letters.[4]

Connection with Robert Boyle and the Royal Society

Much has been made of an "invisible college" in London of the later 1640s. Revisionist history has undermined earlier narratives.

In letters in 1646 and 1647, Boyle refers to "our invisible college" or "our philosophical college". The society's common theme was to acquire knowledge through experimental investigation.[5] Three dated letters are the basic documentary evidence: Boyle sent them to Isaac Marcombes (Boyle's former tutor and a Huguenot, who was then in Geneva), Francis Tallents who at that point was a fellow of Magdalene College, Cambridge,[6] and London-based Samuel Hartlib.[7]

The Hartlib Circle were a far-reaching group of correspondents linked to Hartlib, an intelligencer. They included Sir Cheney Culpeper and Benjamin Worsley who were interested, among other matters, in alchemy.[8] Worsley in 1646 was experimenting on saltpetre manufacture, and Charles Webster in the Oxford Dictionary of National Biography argues that he was the "prime mover" of the Invisible College at this point: a network with aims and views close to those of the Hartlib Circle with which it overlapped.[9] Margery Purver concludes that the 1647 reference of "invisible college" was to the group around Hartlib concerned to lobby Parliament in favour of an "Office of Address" or centralised communication centre for the exchange of information.[7] Maddison suggests that the "Invisible College" might have comprised Worsley, John Dury and others with Boyle, who were interested in profiting from science (and possibly involving George Starkey).[10]

Richard S. Westfall distinguishes Hartlib's "Comenian circle" from other groups; and gives a list of "invisible college" members based on this identification. They comprise: William Petty, Boyle, Arnold Boate and Gerard Boate, Cressy Dymock, and Gabriel Platte.[11] Miles Symner may have belonged to this circle.[12]

Historiography of the Royal Society

Lauren Kassell, writing for the Oxford Dictionary of National Biography,[13] notes that the group of natural philosophers meeting in London from 1645 was identified as the "invisible college" by Thomas Birch, writing in the 18th century; this identification then became orthodox, for example in the first edition Dictionary of National Biography.[14] This other group, later centred on Wadham College, Oxford and John Wilkins, was centrally concerned in the founding of the Royal Society; and Boyle became part of it in the 1650s. It is more properly called "the men of Gresham",[15] from its connection with Gresham College in London.

It is the identification of the Gresham group with the "invisible college" that is now generally queried by scholars. Christopher Hill writes that the Gresham group was convened in 1645 by Theodore Haak in Samuel Foster's rooms in Gresham College; and notes Haak's membership of the Hartlib Circle and Comenian connections, while also distinguishing the two groups.[16] Haak is mentioned as convener in an account by John Wallis, who talks about a previous group containing many physicians who then came to Foster's rooms; but Wallis's account is generally seen to be somewhat at variance with the history provided by Thomas Sprat of the Royal Society.[17]

The concept of invisible college was developed in the sociology of science by Diana Crane (1972) building on Derek J. de Solla Price's work on citation networks. It is related, but significantly different, from other concepts of expert communities, such as 'Epistemic communities' (Haas, 1992) or Community of Practice (Wenger, 1998). Recently, the concept was applied to the global network of communications among scientists by Caroline S. Wagner in The New Invisible College: Science for Development (Brookings 2008). It was also referred to in Clay Shirky's book Cognitive Surplus.

In fiction it is mentioned in the novel The Lost Symbol by Dan Brown, "Foucault's Pendulum" by Umberto Eco, was the inspiration for the Unseen University in the works of Terry Pratchett, and was one of the main reference points for Grant Morrison's The Invisibles comic book series.