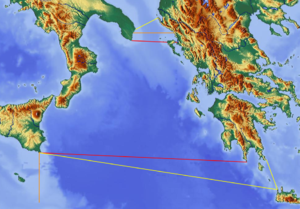 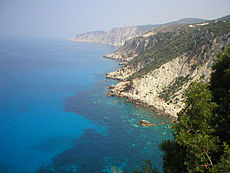 The Ionian Sea, view from the island Kefalonia, Greece 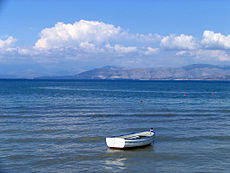 The Ionian Sea, as seen from Corfu Island, Greece, and with Saranda, Albania in the background

The Ionian Sea (Greek: Ιόνιο Πέλαγος, Greek pronunciation: [iˈonio ˈpelaɣos], Italian: Mar Ionio, Italian pronunciation: [mar ˈjɔːnjo], Albanian: Deti Jon) is an elongated embayment of the Mediterranean Sea, south of the Adriatic Sea. It is bounded by southern Italy including Calabria, Sicily, and the Salento peninsula to the west, southern Albania to the north, and west coast of Greece.

All major islands in the sea belong to Greece. They are collectively referred to as the Ionian Islands, the major ones being Corfu, Zakynthos, Kephalonia, Ithaca, and Lefkada. There are ferry routes between Patras and Igoumenitsa, Greece, and Brindisi and Ancona, Italy, that cross the east and north of the Ionian Sea, and from Piraeus westward. Calypso Deep, the deepest point in the Mediterranean at −5,267 m (−17,280 ft), is located in the Ionian Sea, at Lua error in Module:Coordinates at line 668: callParserFunction: function "#coordinates" was not found..[1][2] The sea is one of the most seismically active areas in the world.

The name Ionian comes from Greek language Ἰόνιον (πέλαγος). Its etymology is unknown.[3] Ancient Greek writers, especially Aeschylus, linked it to the myth of Io. In Ancient Greek the adjective Ionios (Ἰόνιος) was used as an epithet for the sea because Io swam across it.[4] There were also narratives about other eponymic legendary figures; according to one version, Ionius was a son of Adrias (eponymic for the Adriatic Sea); according to another, Ionius was a son of Dyrrhachus.[citation needed] When Dyrrhachus was attacked by his own brothers, Heracles, who was passing through the area, came to his aid, but in the fight the hero killed his ally's son by mistake. The corpse was cast into the sea, which thereafter was called the Ionian Sea. In Albanian language, Det Jon literally means Our sea.

The International Hydrographic Organization defines the limits of the Ionian Sea as follows:[5]

On the North. A line running from the mouth of the Butrinto River (39°44'N) in Albania, to Cape Karagol in Corfu (39°45'N), along the North Coast of Corfu to Cape Kephali (39°45'N) and from thence to Cape Santa Maria di Leuca in Italy.

On the East. From the mouth of the Butrinto River in Albania down the coast of the mainland to Cape Matapan.

On the South. A line from Cape Matapan to Cape Passero, the Southern point of Sicily.

On the West. The East coast of Sicily and the Southeast coast of Italy to Cape Santa Maria di Leuca. 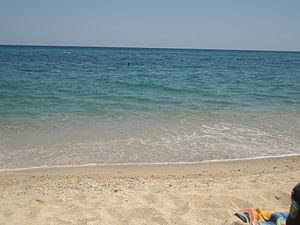 From south to north in the west, then north to south in the east: