The Iowa Caucus[1] is an electoral event in which residents of the U.S. state of Iowa meet in precinct caucuses in all of Iowa's 1,681 precincts and elect delegates to the corresponding conventions in each of the state's 99 counties. These county conventions then select delegates for both Iowa's Congressional District Convention and the State Convention, which eventually choose the delegates for the presidential nominating conventions. About 1% of the nation's delegates are chosen by the Iowa State Convention. The Iowa Caucus is noteworthy for the amount of media attention it receives during U.S. presidential election years. Since 1972,[2] the Iowa caucuses have been the first major electoral event of the nominating process for President of the United States. Since 1972, the Iowa caucuses have had a 43% success rate at predicting which Democratic candidate for president and a 50% success rate at predicting which Republican candidate for president will go on to win the nomination of their political party at that party's national convention, though they may more reliably indicate which ones are likely to drop out owing to lack of support.[3][4][5]

After the 1968 Democratic National Convention protest activity, the Democratic Party decided to make changes to their presidential nominating process by spreading out the schedule in each state. Since Iowa had a complex process of precinct caucuses, county conventions, district conventions, and a state convention, they chose to start early. In 1972, Iowa was the first state to hold their Democratic caucus, and had the first Republican caucus four years later.[8] 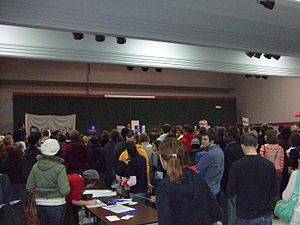 The Iowa Caucus operates very differently from the more common primary election used by most other states (see U.S. presidential primary). The caucuses are generally defined as "gatherings of neighbors." Rather than going to polls and casting ballots, Iowans gather at a set location in each of Iowa's 1,681 precincts. Typically, these meetings occur in schools, churches, public libraries and even individuals' houses. The caucuses are held every two years, but the ones that receive national attention are the presidential preference caucuses held every four years. In addition to the voting and the presidential preference choices, caucus-goers begin the process of writing their parties’ platforms by introducing resolutions.[9]

Beginning with the 2012 Presidential election, Iowa switched from the old winner-take-all allocation to proportional allocation. The change was made to prolong the race, giving lesser known candidates a chance and making it harder for a frontrunner to secure the majority early. It was also hoped that this change in the election system would energize the base of the party.[10][11]

The process used by the Democrats is more complex than the Republican Party caucus process. Each precinct divides its delegate seats among the candidates in proportion to caucus goers' votes. Participants indicate their support for a particular candidate by standing in a designated area of the caucus site (forming a preference group). An area may also be designated for undecided participants. Then, for roughly 30 minutes, participants try to convince their neighbors to support their candidates. Each preference group might informally deputize a few members to recruit supporters from the other groups and, in particular, from among those undecided. Undecided participants might visit each preference group to ask its members about their candidate.

After 30 minutes, the electioneering is temporarily halted and the supporters for each candidate are counted. At this point, the caucus officials determine which candidates are viable. Depending on the number of county delegates to be elected, the viability threshold is 15% of attendees. For a candidate to receive any delegates from a particular precinct, he or she must have the support of at least the percentage of participants required by the viability threshold. Once viability is determined, participants have roughly another 30 minutes to realign: the supporters of inviable candidates may find a viable candidate to support, join together with supporters of another inviable candidate to secure a delegate for one of the two, or choose to abstain. This realignment is a crucial distinction of caucuses in that (unlike a primary) being a voter's second candidate of choice can help a candidate.

When the voting is closed, a final head count is conducted, and each precinct apportions delegates to the county convention. These numbers are reported to the state party, which counts the total number of delegates for each candidate and reports the results to the media. Most of the participants go home, leaving a few to finish the business of the caucus: each preference group elects its delegates, and then the groups reconvene to elect local party officers and discuss the platform. The delegates chosen by the precinct then go to a later caucus, the county convention, to choose delegates to the district convention and state convention. Most of the delegates to the Democratic National Convention are selected at the district convention, with the remaining ones selected at the state convention. Delegates to each level of convention are initially bound to support their chosen candidate but can later switch in a process very similar to what goes on at the precinct level; however, as major shifts in delegate support are rare, the media declares the candidate with the most delegates on the precinct caucus night the winner, and relatively little attention is paid to the later caucuses.

Because the delegates elected at the caucuses did not need to declare a candidate preference, the media did not have an objective way to determine the success of individual candidates at the caucuses. The media focused on the secret ballot polling conducted at the caucus sites and have generally referred to this non-binding poll as the caucus. There were irregularities in the 2012 caucus site polling results, including the fact that eight precinct results went missing and were never counted.

Because of the irregularities in the process and the fact that the totals reported to the media were unrelated to the delegate selection process, there have been changes in both how the caucus site secret ballot polling is sent to state party headquarters and in how Iowa delegates to the national convention are required to vote.

Starting in 2016, caucus results have become binding when selecting delegates.[12] Acting in accordance with a mandate from the Republican National Committee, the delegates are bound on the first ballot to vote for candidates in proportion to the votes cast for each candidate at the caucus sites.[13]

In 2004, the meetings ran from 6:30 p.m. until approximately 8:00 p.m. on January 19, 2004, with a turnout of about 124,000 caucus-goers.[14] The county convention occurred on March 13, the district convention on April 24, and the state convention on June 26. Delegates could and did change their votes based on further developments in the race; for instance, in 2004 the delegates pledged to Dick Gephardt, who left the race after the precinct caucuses, chose a different candidate to support at the county, district, and state level.

The number of delegates each candidate receives eventually determines how many state delegates from Iowa that candidate will have at the Democratic National Convention. Iowa sends 56 delegates to the DNC out of a total 4,366.

In 2014, the Iowa Democratic Party announced changes to the caucus system that will allow members of the military to participate in a statewide caucus and establish satellite caucuses for the disabled and others who have trouble making it to the physical location of the caucuses. They will also work for the passage of a new law that requires employers to allow employees to take time off for the caucuses.[15]

The 2012 Iowa caucuses took place on Tuesday, January 3, starting at 7 p.m. CST. Incumbent president Barack Obama only faced minor opposition in the Democratic caucus and received 98% of the vote,[20] but the Republican caucus was heavily contested between several challengers. Initial results reported that Mitt Romney beat out Rick Santorum by just 8 votes,[21] but when the final results came out two weeks later Rick Santorum secured the victory over Romney by a margin of 34 votes with Ron Paul in a strong 3rd. Results were certified by the Caucus, but not by the Republican party, who declared it a split decision due to missing reports from 8 precincts,[22] but who later certified the caucus as a win for Santorum.[23] The caucus winner changed yet again when the Iowa delegate totals were finally determined giving Ron Paul the win along with several other states that same weekend.[24]

The 2016 Iowa caucuses took place on Monday, February 1. The counting started at 7 p.m. CST and lasted one hour, after the caucus discussions.

Democratic caucus participants (though not Republicans, whose caucuses vote by secret ballot) must publicly state their opinion and vote, leading to natural problems such as peer pressure from neighbors and embarrassment over who one's preferred candidate might be. Participants are often required to listen to speeches from local political leaders.

An Iowa caucus can last around two hours, preventing people who must work, who are sick, or who must take care of their children from casting their vote.

Each precinct's vote may be weighed differently due to its past voting record. Ties can be solved by picking a name out of a hat or a simple coin toss, leading to anger over the true democratic nature of these caucuses.[30][31] Additionally, the representation of the caucus has had a traditionally low turnout.[32] Others question the permanent feature of having caucuses in certain states, while perpetually ignoring the rest of the country.[33]

Arguments in favor of caucuses include the belief that they favor more motivated participants than simple ballots. Additionally, many caucus-goers consider them more interesting due to how much more interactive they are than a primary. One other argument in favor is that caucus-goers get more information before making their vote, so those voting will potentially be more educated about their candidate choices than primary-goers. In 2016, as part of the Iowa Democratic Party (IDP) continuing effort to expand participation in the Iowa Democratic Precinct Caucuses, for the first time ever the party will hold a Tele-Caucus for military members serving out-of-state and Iowans living abroad. In addition, the IDP is instituting Satellite Caucuses in 2016 to improve accessibility and participation in the Iowa Caucuses. These caucus locations will be held in different places from the normal precinct caucus locations. The option to host a Satellite Caucus will be available to a group of Democrats who want to participate, but are unable to attend their precinct caucus due to hardship (limitations of mobility, distance, or time). Participation is open to individuals who live and/or work at the Satellite Caucus site who otherwise would not be able to participate in their regular precinct caucus due to hardship.