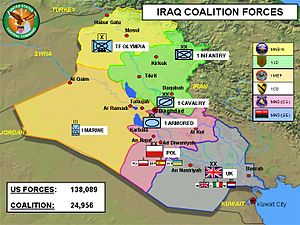 Dispositions of U.S. and allied units in the different occupation zones as of April 30, 2004

On January 30, 2007, then-U.S. Senator Barack Obama introduced the Iraq War De-Escalation Act of 2007 (S. 433). The plan would have stopped the 2007 U.S. Troop Surge of 21,500 in Iraq, and would also have begun a phased redeployment of troops from Iraq with the goal of removing all combat forces by March 31, 2008. The bill was referred to committee and failed to become law in the 110th Congress.

Obama announced the Iraq War De-Escalation Act after President Bush announced an increase in the number of troops fighting in Iraq, and after the State of the Union Address. Obama released a statement saying, "Our troops have performed brilliantly in Iraq, but no amount of American soldiers can solve the political differences at the heart of somebody else's civil war," Obama said, alluding to Michael Scott Doran's essay "Somebody Else's Civil War" published in the Foreign Affairs journal in 2002. "That's why I have introduced a plan to not only stop the escalation of this war, but begin a phased redeployment that can pressure the Iraqis to finally reach a political settlement and reduce the violence."[citation needed]

Barack Obama has been critical of President Bush's handling of the war in Iraq, and has been an outspoken critic before the war began in 2003. The legislation proposed by Obama is similar to the plan called for in the Iraq Study Group report issued in December 2006.[1]

Important aspects of the plan

Obama's support for the bill and general opposition of the surge pushed forth by David Petraeus has garnered him criticism from Republicans and a few pro-war Democrats. Senator John McCain, his opponent in the recent Presidential Election, has said that Obama was wrong to oppose the surge, pointing to the decreased levels of the violence that Obama said the surge would raise.[3] Obama's campaign removed the candidate's criticism of the surge from his website[4] however he said that his position on Iraq was unchanged, and he still supported a timetable for withdrawal from Iraq.