The daughter of two university professors who emigrated from China, Chang was born in Princeton, New Jersey and raised in Champaign-Urbana, Illinois, where she attended University Laboratory High School of Urbana, Illinois and graduated in 1985. She earned a bachelor's degree in journalism at the University of Illinois at Urbana-Champaign in 1989, during which time she also worked as a New York Times stringer from Urbana-Champaign, and wrote six front-page articles over the course of one year. After brief stints at the Associated Press and the Chicago Tribune she pursued a master's degree in Writing Seminars at Johns Hopkins University.[3] She then embarked on her career as an author, and lectured and wrote magazine articles. She married Bretton Lee Douglas, whom she had met in college, and had one son, Christopher, who was 2 years old at the time of her suicide. She lived in San Jose, California in the final years of her life.

Chang wrote three books documenting the experiences of Asians and Chinese Americans in history. Her first, Thread of the Silkworm (Basic Books, 1995)[4] tells the life story of the Chinese professor, Tsien Hsue-shen (or Qian Xuesen) during the Red Scare in the 1950s. Although Tsien was one of the founders of NASA's Jet Propulsion Laboratory (JPL), and for many years helped the military of the United States debrief scientists from Nazi Germany, he was suddenly accused of being a spy and a member of the Communist Party USA, and was placed under house arrest from 1950 to 1955. Tsien left for the People's Republic of China in September 1955. Upon his return to China, Tsien developed the Dongfeng missile program, and later the Silkworm missile, which would be used by the Iraqi military during its war on Iran and ironically against the United States-led coalitions during Gulf Wars One and Two.

File:Rape-of-nanking-cover.gif
The Rape of Nanking, Chang's most well-known work

Her second book, The Rape of Nanking: The Forgotten Holocaust of World War II (1997),[5] was published on the 60th anniversary of the Nanking Massacre, and was motivated in part by her own grandparents' stories about their escape from the massacre. It documents atrocities committed against Chinese by forces of the Imperial Japanese Army during the Second Sino-Japanese War, and includes interviews with victims. Her second book remained on the New York Times Bestseller list for 10 weeks.[6] Based on the book, an American documentary film, Nanking, was released in 2007.

The book attracted both praise for exposing the details of the atrocity, and criticism because of alleged bias and inaccuracies. Alvin D Coox, a professor at San Diego State University, said of Chang's book, "As a work of history, Chang's book is flawed, as we have sought to demonstrate. If it is a politically motivated work of partisan propaganda, it is successful to a certain degree. But shouldn't Chang's compassion extend to the healing of old wounds rather than their revival?"[7] After publication of the book, Chang campaigned to persuade the Japanese government to apologize for its troops' wartime conduct and to pay compensation.

Her third book, The Chinese in America (2003),[8] is a history of Chinese Americans that argued that the people were treated as perpetual outsiders. Consistent with the style of her earlier works, the book relied heavily on personal accounts, drawing its strong emotional content from their stories. She wrote, "The America of today would not be the same America without the achievements of its ethnic Chinese," and that "scratch the surface of every American celebrity of Chinese heritage and you will find that, no matter how stellar their achievements, no matter how great their contribution to U.S. society, virtually all of them have had their identities questioned at one point or another."[9]

Success as an author made Iris Chang into a public figure. The Rape of Nanking placed her in great demand as a speaker and as an interview subject, and, more broadly, as a spokesperson for the viewpoint that the Japanese government had not done enough to compensate victims of their invasion of China. In one often-mentioned incident (as reported by The Times of London):

...she confronted the Japanese Ambassador to the United States on television, demanded an apology and expressed her dissatisfaction with his mere acknowledgement "that really unfortunate things happened, acts of violence were committed by members of the Japanese military". "It is because of these types of wording and the vagueness of such expressions that Chinese people, I think, are infuriated," was her reaction.[10]

Chang's visibility as a public figure increased with her final work, The Chinese in America, where she argued that Chinese Americans were treated as perpetual outsiders. After her death, she became the subject of tributes from fellow writers. Mo Hayder dedicated a novel to her. Reporter Richard Rongstad eulogized her as "Iris Chang lit a flame and passed it to others and we should not allow that flame to be extinguished."

In 2007, the documentary Nanking was dedicated to Chang, as well as the Chinese victims of Nanking. 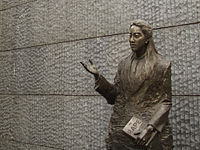 Chang suffered a nervous breakdown in August 2004, which her family, friends and doctors attributed in part to constant sleep deprivation and heavy doses of psychologically damaging prescription medication. At the time, she was several months into research for her fourth book, about the Bataan Death March. She was also promoting The Chinese in America. While en route to Harrodsburg, Kentucky, where she planned to gain access to a "time capsule" of audio recordings from servicemen, she suffered an extreme bout of depression that left her unable to leave her hotel room in Louisville. A local veteran who was assisting her research helped her check into Norton Psychiatric Hospital in Louisville, where she was diagnosed with reactive psychosis, placed on heavy medication for three days and then released to her parents. After the release from the hospital, she continued to suffer from depression and experienced the side effects of several medications she was taking.[11] Chang was also reportedly deeply disturbed by much of the subject matter of her research.[12]

On November 9, 2004 at about 9 a.m., Chang was found dead in her car by a county water district employee on a rural road south of Los Gatos, California and west of State Route 17, in Santa Clara County. Investigators concluded that Chang had shot herself through the mouth with a revolver. At the time of her death she had been taking the medications Depakote and Risperdal to stabilize her mood.[11]

It was later discovered that she had left behind three suicide notes each dated November 8, 2004. "Statement of Iris Chang" stated:

I promise to get up and get out of the house every morning. I will stop by to visit my parents then go for a long walk. I will follow the doctor's orders for medications. I promise not to hurt myself. I promise not to visit Web sites that talk about suicide.[11]

The next note was a draft of the third:

When you believe you have a future, you think in terms of generations and years. When you do not, you live not just by the day — but by the minute. It is far better that you remember me as I was—in my heyday as a best-selling author—than the wild-eyed wreck who returned from Louisville. ... Each breath is becoming difficult for me to take—the anxiety can be compared to drowning in an open sea. I know that my actions will transfer some of this pain to others, indeed those who love me the most. Please forgive me.[13]

There are aspects of my experience in Louisville that I will never understand. Deep down I suspect that you may have more answers about this than I do. I can never shake my belief that I was being recruited, and later persecuted, by forces more powerful than I could have imagined. Whether it was the CIA or some other organization I will never know. As long as I am alive, these forces will never stop hounding me.

Days before I left for Louisville I had a deep foreboding about my safety. I sensed suddenly threats to my own life: an eerie feeling that I was being followed in the streets, the white van parked outside my house, damaged mail arriving at my P.O. Box. I believe my detention at Norton Hospital was the government's attempt to discredit me.

Reports said that news of her suicide hit the massacre survivor community in Nanjing hard.[14] In tribute to Chang, the survivors held a service at the same time as her funeral, held at the Gate of Heaven Cemetery in Cupertino, California on November 12, 2004, at the Nanjing Massacre Memorial Hall. In 2005, the Memorial Hall which collects documents, photos, and human remains from the massacre, added both a wing and a bronze statue dedicated to Chang.