Irish Catholic Martyrs were dozens of people who have been sanctified in varying degrees for dying for their Roman Catholic faith between 1537 and 1714 in Ireland. The canonisation of Oliver Plunkett in 1975 brought an awareness of the other men and women who died for the Catholic faith in the 16th and 17th centuries. On 22 September 1992 Pope John Paul II proclaimed a representative group from Ireland as martyrs and beatified them. "Martyr" was originally a Greek word meaning “witness”. In the Acts of the Apostles, Peter, speaking to those in Jerusalem at Pentecost, claimed he and all the apostles were “martyrs”, that is, witnesses, in this case to Jesus's resurrection. Later the word came to mean a person who followed the example of Christ and gave up their lives rather than deny their faith.[1] 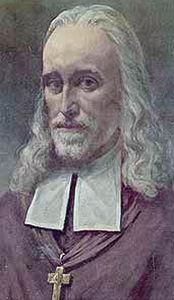 The persecution of Catholics in Ireland in the sixteenth and seventeenth centuries came in waves, caused by a reaction to particular incidents or circumstances, with intervals of comparative respite in between.[7]

Religious persecution of Catholics in Ireland began under King Henry VIII (then Lord of Ireland) after his excommunication in 1533. The Irish Parliament adopted the Acts of Supremacy, establishing the king’s ecclesiastical supremacy.[8] Some priests, bishops, and those who continued to pray for the pope were tortured and killed.[9] The Treasons Act 1534 caused any act of allegiance to the pope to be considered treason. Many were imprisoned on this basis. In 1537, John Travers, the Chancellor of St Patrick's Cathedral, Dublin, was executed under the Act of Supremacy.[10]

Relations improved after the accession of the Catholic Queen Mary in 1553-58, and in the early years of the reign of her sister Queen Elizabeth I. After Mary's death in November 1558, Elizabeth's Parliament passed the Act of Supremacy of 1559, which re-established the Church of England’s separation from the Catholic Church. Initially, Elizabeth adopted a moderate religious policy. The Acts of Supremacy and Uniformity (1559), the Prayer Book of 1559, and the Thirty-Nine Articles (1563) were all Protestant in doctrine, but preserved many traditionally Catholic ceremonies.[11] During the early years of her reign no great pressure was put on Catholics to conform to the "Established Church" of the new regime, but the situation changed rapidly from about 1570 onwards, mainly as a result of Pope Pius V's papal bull Regnans in Excelsis which placed an obligation on all faithful Roman Catholics to seek to overthrow Queen Elizabeth I.[7]

In 1563 the Earl of Essex issued a proclamation, by which all priests, secular and regular, were forbidden to officiate, or even to reside in Dublin. Fines and penalties were strictly enforced for absence from the Protestant service; before long, torture and death were inflicted. Priests and religious were, as might be expected, the first victims. They were hunted into mountains and caves; and the parish churches and few monastic chapels which had escaped the rapacity of Henry VIII.[12]

Regnans in Excelsis started a new round of conflicts in 1570, in which Roman Catholics were obliged to repudiate Elizabeth's laws and the status of her officials, or to overthrow them if possible. In Ireland the First Desmond Rebellion was launched in 1569, at almost the same time as the Northern Rebellion in England. The Wexford Martyrs were found guilty of treason for aiding in the escape of James Eustace, 3rd Viscount Baltinglass and refusing to take the Oath of Supremacy and declare Elizabeth I of England to be the head of the Church.

During this period, the English persecution of Catholics in Ireland was more lenient than usual, owing to the sympathy of the king, until the Popish Plot, a fictitious conspiracy concocted by Titus Oates, between 1678 and 1681 gripped the Kingdoms of England and Scotland in anti-Catholic hysteria. Those caught up in the false allegations included:

Irish martyrs suffered over several reigns. There was a long delay in starting the investigations into the causes of the Irish martrys for fear of reprisals. Further complicating the investigation is that the records of these martyrs were destroyed, or not compiled, due to the danger of keeping such evidence. Details of their endurance in most cases have been lost.[8] The first general catalog is that of Father John Houling, S.J., compiled in Portugal between 1588 and 1599. It is styled a very brief abstract of certain persons whom it commemorates as sufferers for the Faith under Elizabeth.[9]

After Catholic Emancipation in 1829, the cause for Oliver Plunkett was re-visited. As a result, a series of publications on the whole period of persecutions was made. The first to complete the process was Oliver Plunkett, Archbishop of Armagh, canonized in 1975 by Pope Paul VI.[8] Plunkett was certainly targeted by the administration and unfairly tried.

John Kearney (1619-1653) was born in Cashel, County Tipperary and joined the Franciscans at the Kilkenny friary. After his novitiate, he went to Leuven in Belgium and was ordained in Brussels in 1642. Returned to Ireland, he taught in Cashel and Waterford, and was much admired for his preaching. In 1650 he became guardian of Carrick-on-Suir, Co Tipperary. During the Cromwellian persecutions, he was arrested and hanged in Clonmel, Co Tipperary. He was buried in the chapter hall of the suppressed friary of Cashel.[4]

Peter O'Higgins was born in Dublin around 1602 during the persecution under James I. He was educated secretly in Ireland and later in Spain. With the accession of Charles I in 1625, a limited tolerance obtained and Peter came back to Dublin and was sent to re-open the Dominican house in Naas. The 1641 rebellion, a result of the plantations, evictions and persecutions, brought with it years of conflict between Irish v Old English, Catholic v Protestant; Puritan v Anglican. During this time the William Pilsworth, Protestant rector of Donadea, was arrested by rebel soldiers and about to be hanged, when Fr. Peter O'Higgins stepped forward. Pilsworth later wrote that when he was on the gallows, “a priest whom I never saw before, made a long speech on my behalf saying that this…was a bloody inhuman act that would…draw God’s vengeance on them. Whereupon I was brought down and released.” [5]

The government moved on Naas and O'Higgins was arrested and turned over to Governor Coote of Dublin. O'Higgins was offered his life if he would renounce his faith. He responded, "“So here the condition on which I am granted my life. They want me to deny my religion. I spurn their offer. I die a Catholic and a Dominican priest. I forgive from my heart all who have conspired to bring about my death.” Among the crowd at the foot of the scaffold was William Pilsworth who shouted out: “This man is innocent. This man is innocent. He saved my life.” William Pilsworth was not wanting in courage, but his words fell on deaf ears. With the words “Deo Gratias” on his lips Peter O’Higgins died on 23 March 1642.[5]

Various churches have been dedicated to the martyrs, including: