From Infogalactic: the planetary knowledge core
Jump to: navigation, search
This article is about the regiment in the British Army. For the police force of the Republic of Ireland, see Garda Síochána. For the University of Notre Dame marching band contingent, see Irish Guard (Notre Dame).

The Irish Guards recruit in Northern Ireland[4] and the Irish neighbourhoods of major British cities.[5] Although restrictions in the Republic of Ireland's Defence Act make it illegal to induce, procure or persuade enlistment of any citizen of the Republic of Ireland into the military of another state,[6] people from the Republic do enlist in the regiment.[7] Nowadays they recruit from all around the United Kingdom and Commonwealth and recently, the regiment has also seen several "non-traditional" recruits, notably Christopher Muzvuru of Zimbabwe who qualified as a piper before becoming one of the regiment's two fatal casualties in Iraq in 2003.

In November 1942, during the Second World War, Jean, Grand Duke of Luxembourg joined the British Army as a volunteer in the Irish Guards.[8]

One way to distinguish between the five regiments of Foot Guards is the spacing of the buttons on their tunics. The Irish Guards have buttons arranged in groups of four as they were the fourth Foot Guards regiment to be founded. They also have a prominent St. Patrick's blue plume on the right side of their bearskins.

The Regiment also includes the Band of the Irish Guards and the Drums and Pipes.

The Irish Guards regiment was formed on 1 April 1900 by order of Queen Victoria to commemorate the Irishmen who fought in the Second Boer War for the British Empire.[10][11]

During the First World War, 1st Battalion, The Irish Guards was deployed to France, and they remained on the Western Front for the duration of the war. During 1914 and early 1915, they took part in numerous battles, including Mons, Marne and Ypres. Additional battalions were raised in 1915 and the 2nd Battalion fought at Loos. During 1916, The Irish Guards were involved in the Battle of the Somme where they received severe casualties. In 1917 they participated in the Third Battle of Ypres and Cambrai. They fought up to the final days of the war including attacking the Hindenburg Line. During the entire war, The Irish Guards lost over 2,300 officers and men, including John Kipling, son of Rudyard Kipling. The regiment won 406 medals including four Victoria Crosses.

The regiment's continued existence was threatened briefly when Winston Churchill, who served as Secretary of State for War between 1919 and 1921, sought the elimination of the Irish Guards and Welsh Guards as an economy measure. This proposal, however, did not find favour in government or army circles and was dropped. Between the wars, the regiment was deployed at various times to Turkey, Gibraltar, Egypt and Palestine.

During the Second World War, battalions of the regiment fought in Norway, France, North Africa and Italy and following D-Day in France, Belgium, the Netherlands and Germany. The regiment lost over 700 men killed and was awarded 252 medals including two Victoria Crosses.

Since 1945, the regiment has served in many areas of conflict as well as being part of the British Army of the Rhine (BAOR) in Germany. They also served as the garrison of Hong Kong in the 1970s. The regiment was not assigned to Northern Ireland until the conflict had mostly died down in 1992. However, a Provisional Irish Republican Army (IRA) bomb blasted a bus carrying men of the regiment to Chelsea Barracks in October, 1981. Twenty-three soldiers and 16 others were wounded and two passers-by killed.[12][13] 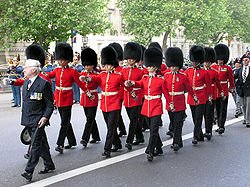 Foot Guards, wearing bearskins, march to the Cenotaph on 12 June 2005 for a service of remembrance for the Combined Irish Regiments Old Comrades Association annual parade. Their uniform buttons are in groups of four, identifying these soldiers as Irish Guards

Like the other Guards regiments, the "Home Service Dress" of The Irish Guards is a scarlet tunic and bearskin. Buttons are worn in two rows of four, reflecting the regiment's position as the fourth most senior Guards regiment, and the collar is adorned with a shamrock on either side. They also sport a St. Patrick's blue plume on the right side of the bearskin.

A plume of St Patrick's blue[17] was selected because blue is the colour of the mantle and sash of the Order of St. Patrick, an order of chivalry[18] founded by George III of the United Kingdom for the Kingdom of Ireland in February 1783[19] from which the regiment also draws its cap star and motto.[20] Blue was selected because the uniform of the Royal Dublin Fusiliers, which were still in existence at the time The Irish Guards were formed, was a scarlet tunic and bearskin with a green plume.

In "Walking-out Dress", The Irish Guards can be identified by the green band on their forage caps. Officers also traditionally carry a blackthorn walking stick. Drummers and flautists, in common with the other Guards regiments, wear a distinctive tunic adorned with winged epaulettes and white lace.

The Irish Guards like the other Guards regiments wear a khaki beret with the blue/red/blue Household Division backing patch on it.On the beret ranks from Guardsman to Lance Sergeant wear a brass or staybrite cap badge, Sergeants and Colour Sergeants wear a bi-metal cap badge, Warrant Officers wear a silver plate gilt and enamel cap badge and commissioned officers of the regiment wear an embroidered cap badge.

The uniform of The Irish Guards pipers is, like The Scots Guards, a kilt and tunic, yet is also very different. Bagpipers wear saffron kilts rather than tartan, green hose with saffron flashes and heavy black shoes known as brogues with no spats, a rifle green doublet with buttons in fours and a floppy hat known as a caubeen rather than a feather bonnet. The regimental cap star is worn over the piper's right eye and is topped by a blue hackle. A green cloak with four silver buttons is worn over the shoulders and is secured by two green straps that cross over the chest, but is never buttoned except in severely inclement weather. A white tunic is available for wear in the tropics, in which case the cloak is dispensed with. The pipe major, like the pipe major of The Scots Guards, also holds a warrant as personal piper to Her Majesty, the Queen.

Prince William wore an Irish Guards tunic in his marriage to Kate Middleton.

The regiment takes its motto, "Quis Separabit", or "Who shall separate us?" from the Order of St Patrick.

The Irish Guards are known affectionately throughout the Army as "the Micks" or "Fighting Micks." An earlier nickname, "Bob's Own", after Field Marshal Lord Roberts has fallen into disuse. The term "Micks", while derogatory if used in civilian life, is tolerated if used within the Army.

Recruits to the Guards Division go through a thirty-week gruelling training programme at the Infantry Training Centre (ITC). The training is two weeks more than the training for the Regular line infantry regiments of the British Army; the extra training, carried out throughout the course, is devoted to drill and ceremonies.[21]

Since 1902, an Irish Wolfhound has been presented as a mascot to the regiment by the members of the Irish Wolfhound Club, who hoped the publicity would increase the breed's popularity with the public. The first mascot was called Brian Boru.[22]

In 1961, the wolfhound was admitted to the select club of "official" Army mascots, entitling him to the services of the Royal Army Veterinary Corps, as well as quartering and food at public expense. Originally, the mascot was in the care of a drummer boy, but is now looked after by one of the regiment's drummers and his family. The Irish Guards are the only Guards regiment permitted to have their mascot lead them on parade. During Trooping the Colour, however, the mascot marches only from Wellington Barracks as far as Horse Guards Parade. He then falls out of the formation and does not participate in the trooping itself. The regiment's current wolfhound is named Domhnall. His predecessor, Conmael, made his debut at Trooping the Colour on 13 June 2009.[23] At the end of 2012 Conmael retired and was replaced with the new wolfhound- Domhnall.[24]

The Irish Guards and other Guards Regiments have a long-standing connection to The Parachute Regiment. Guardsman who have Completed P company are Transferred into the Guards Parachute Platoon who are currently attached to 3 PARA still keeping the tradition of the No 1 (Guards) Independent Parachute Company who were the original Pathfinder Group of 16th Parachute Brigade now renamed 16th Air Assault Brigade.[25]

St. Patrick's Day is the traditional regimental celebration.[26] Fresh shamrock is presented to the members of the regiment, no matter where it is stationed.[20]

In 1989, Queen Elizabeth was unable to make the journey to Belize, where the battalion was stationed, and the Grand Duke of Luxembourg substituted for her.

In 2012, The Duchess of Cambridge made the presentation at Aldershot, as her first solo military engagement.[27]

The regiment is also associated with HMS Portland, as well as the 4th Battalion, Royal Australian Regiment.

In September 2015, London-based Irish newspaper The Irish Post revealed that the Irish Guards would field a GAA team in the London GAA Championship. It was a landmark occasion, as the Irish Guards became the first British Army team to gain affiliation to the GAA, who had banned British armed forces from playing their sports from 1897 to 2001 under Rule 21.[28]

Each year the Irish Guards are host to the 'Mini Micks Contest' hosted at Magilligan, Northern Ireland. The regiment invite the Irish Guards Cadets (Army Cadet Force) from the UK Mainland and Northern Ireland to participate in the contest. Each County/Detachment will send a section and two reserves. The Cadets compete for the opportunity to be called 'The Colonel's Detachment' and the chance to parade with the regiment during St Patrick's Day at Cavalry Barracks, Hounslow, which they are presented Shamrock by the Duke and Duchess of Cambridge. As of September 2015, Crosby Detachment, part of the Merseyside Army Cadet Force are the Colonel's Detachment. 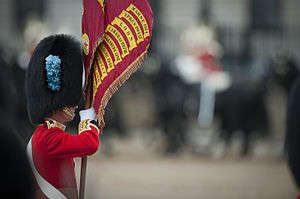 The Regimental Colour of the 1st Battalion Irish Guards, displaying some of the regiment's battle honours.

British Army regiments typically have an honorary "colonel", often a member of the Royal Family or a prominent retired military officer with connections to the regiment, who functions as a kind of patron or guardian of the regiment's interests in high government circles. HM The Queen is colonel-in-chief of all Guards regiments.

The Irish Guards colonels have been: