In general, neither Ireland nor Great Britain uses latitude or longitude in describing internal geographic locations. Instead grid reference systems are in common usage.

The Ordnance Survey of Ireland has implemented a new coordinate system for Ireland called Irish Transverse Mercator, or ITM, which will initially run in parallel with the existing Irish grid system. In both systems, the true origin is at 53° 30' N, 8° W[1] — a point in Lough Ree, close to the western (Co. Roscommon) shore, whose grid reference is N 000 500. 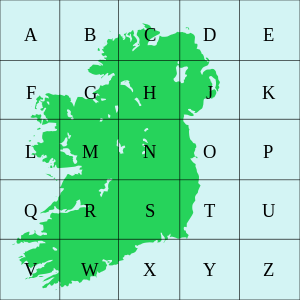 The area of Ireland is divided into 25 squares, measuring 100 by 100 km (62 by 62 mi), each identified by a single letter. The squares are numbered A to Z with I being omitted. Seven of the squares do not actually cover any land in Ireland: A, E, K, P, U, Y and Z.

Within each square, eastings and northings from the origin (south west corner) of the square are given numerically. For example, G0305 means 'square G, 3 km (1.9 mi) east, 5 km (3.1 mi) north'. A location can be indicated to varying resolutions numerically, usually from two digits in each coordinate (for a 1 km (0.62 mi) square) through to five (for a 1 m (3 ft 3 in)) square; the most common usage is the six figure grid reference, employing three digits in each coordinate to determine a 100 m (330 ft) square.